YOUNGSTOWN, Ohio — Standing in the vacant brewery at B&O Station in downtown Youngstown, Richard Bernacki, Aspasia Lyras and Michael Pontikos survey the work ahead of them.

New hoses and gaskets, electrical work, some updated equipment and fresh paint throughout – all necessary to get the new home of Penguin City Beer up and running by March, Bernacki says.

“All the equipment is still here – it just needs updated,” he says.

Bernacki and his wife, Lyras, own Penguin City, which started distributing its beer last August. Pontikos, a professor at Youngstown State University and Lyras’ cousin, handles marketing and branding.

The entrepreneurs are nowhere close to completing their first year in business, but response has already exceeded their expectations and they are in expansion mode, taking over the former Rust Belt Brewing Co. operation at the B&O.

It’s necessary to keep up with demand. Between bottles and wholesale customers, Penguin City sells about 60 barrels monthly, Bernacki says. Lyras, who handles sales, had their first batch of 15 barrels sold within the first two weeks.

“I think we sold a batch before it was even out,” Lyras notes.

By the end of its first month, Penguin City had 15 commercial accounts that ranged from the iconic Royal Oaks Bar & Grill in Youngstown to Michael Alberini’s Restaurant and Wine Shop in Boardman.

They receive calls daily, add new customers each week and distribute as far as Columbiana and Lake Milton. In January, the company added its 100th commercial client. 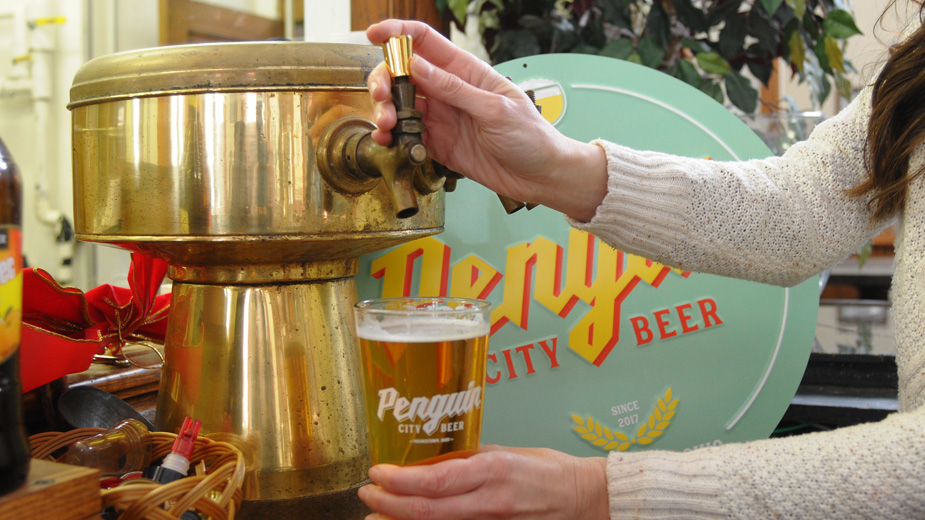 Their goals are high, they say, looking to eventually take Penguin City regional and distribute as far as Pittsburgh, Akron and Cleveland. But they are cautious not to push themselves too far too fast, Bernacki says, and are taking things as they come.

“We’re almost overextending ourselves – because it took off pretty quickly,” he explains. “So we’re trying to work with reality and not put lofty dreams ahead of where we need to get to first.”

They recently hired on some help, bringing employment to eight, including promotions people and delivery drivers. Bernacki, Lyras and Pontikos still wear several hats for the company, handling sales, marketing, customer service, delivery, inventory, business planning and, of course, brewing. Even after a full day of work, the co-owners are responsible for attending events and other obligations in the evening, Lyras says.

Earning recognition as the hometown beer of Youngstown is where the business owners want to be, they say. As Iron City Beer is to Pittsburgh, they are branding Penguin City to be synonymous with the city they have called home all their lives.

“We wanted people to have that pride behind it,” Lyras says. “This is our beer. That was it.”

That guided Bernacki when developing the recipe. Unlike other area brewers, Penguin City does only one beer: a light ale reminiscent of the eastern European pilsners produced by pre-Prohibition breweries, such as the Renner Brewing Co. that operated in Youngstown until 1962.

“The beer back then – before all the domestic light beers – definitely had more body and more flavor,” Bernacki says. “So I wanted something like that. But I wanted it to work well with a modern beer drinker’s palate as well.”

It was important to Penguin City to produce a beer accessible to all drinkers, particularly those who prefer mass-produced domestics such as Budweiser, Pontikos says.

Hence the tagline, “A Solid Beer for Solid People,” which speaks to the idea that the beer can be enjoyed by anybody from executives to the working class, he says.

The label design touches on the history of Youngstown: lettering is in the primary red and yellow colors of Youngstown State University, and the image of a schooner as a nod to the former Golden Dawn Restaurant on the North Side that served Genesee by the glass.

“We wanted it to look like it had been around for a while,” Pontikos says. “It transcends generations.”

The branding seems to be working, Lyras says. Area bars that order a 1/6 barrel, or about 5.2 gallons, end up buying a half-barrel the following week, she says. Drinkers in their early 20s bring home bottles of Penguin City for family gatherings and see their fathers and grandfathers, traditionally domestic light- beer drinkers, preferring Penguin City.

“They’ll say ‘My grandpa only drinks Genesee or Busch Light, and now he loves Penguin City,’ ” Lyras says. “That one is probably my favorite to hear.”

“It’s becoming what we envisioned it to be,” Bernacki adds. “It’s just the go-to hometown beer here.”

Beer retailers praise Penguin City and say it’s been well received among customers in the community. From 4 to 8 p.m. on weekdays, the Casual Pint in Boardman offers $3 happy-hour drafts, $2 off the regular draft price, says owner Justin Homer. In January, Penguin City was in the top three of the top-10 performing beers on tap for the month.

“It just screams out of here,” Homer says. “We do at least a half-barrel every week to a week-and-a-half.”

Friday through Sunday, the bar serves between 60 to 90 glasses of Penguin City on average, he adds. On the retail end, Homer sells about five cases of six-pack bottles every three weeks.

“We have great craft breweries in the area,” says Homer, who offers beer on tap from Noble Creature in Youngstown, Numbers in Lisbon and Modern Methods, Warren. “I think what Penguin City does is a little something different. It will help expand the craft-beer market.”

Chalet Premier in North Lima keeps a display right by the check-out counter and co-owners Bill D’Amico and John Potter say sales were strong during the holidays as customers drove out of their way to stop in and buy the beer.

“There’s lot of shoppers out there who want to support local people,” D’Amico says. “I think that they’ve found themselves a niche in the industry. And the more the community becomes aware of them, the more support they’re getting.”

The success has not been without challenges, Bernacki says.

This past November, leading up to Thanksgiving, the company ran out of beer leaving him and Lyras without beer to take to their family dinners.

To keep up with increased demand, Bernacki hopes to continue contract brewing at Paladin Brewing in Austintown even after the brewery at the B&O is up and running, he says.

Collaborations with companies such as Paladin and the Spruce pop-up shop downtown, which sold Penguin City merchandise during the holidays, has helped.

“It’s that collaboration with other companies and entrepreneurs that’s kind of nice,” Pontikos says. “It’s the same thing with the craft beer market and the other brewers here. It’s a community.”

This year, Penguin City is collaborating on the national level as well as becoming a member of the Jameson Drinking Buddies program for northeastern Ohio.

As a Drinking Buddy, Penguin City and the distiller of Irish whiskey will host events in area bars, offering discounts on their products.

“[Jameson] approached us in November,” Lyras says. “They thought we paired nicely together in this area.”

In early January, Crickets Bar and Grill in Youngstown hosted the first collaborative event with special deals on Boilermakers – a shot of Jameson dropped into a glass of Penguin City Beer. Other events are scheduled, including one for St. Patrick’s Day, Lyras says.

Pictured at top: Penguin City Beer should be operating in the brewery at the B&O Station Banquet Hall by March, say Michael Pontikos, Richard Bernacki and Aspasia Lyras. The light ale is reminiscent of eastern European pilsners.