By MARK TAKAHASHI Edmunds
With all the developments in the auto industry you may think your next car will be electric, including a new federal target that would mean half of all new vehicles sold within a decade will have zero emissions. This will be a dramatic shift for car shoppers, and perhaps an unsettling one. With the future landscape in mind, the experts at Edmunds have cut through the misinformation and examined some of the most prevalent EV myths.

HYBRIDS AND EVS ARE TOO EXPENSIVE

Hybrid and fully electric vehicles are more expensive than comparable gasoline-engine cars to purchase initially. But there’s more to the story. After your purchase, you’ll pay less to keep it running. For example, consider the front-wheel-drive 2021 Honda Passport SUV and the rear-wheel-drive electric Ford Mustang Mach-E. The EPA estimates that an average American driver will pay $2,050 a year to gas up the Passport versus just $650 in electricity to drive the Mach-E for a year.

Some estimates say it can take as long as eight years to recover the increased cost of a battery electric vehicle compared to a gas-powered one, but that doesn’t take into account available financial incentives that can significantly reduce that time. Many vehicles are eligible for tax credits, and the amounts vary depending on your location. There is additional cost to have a home charging station installed, but here too incentives can come into play.

EVs also have fewer moving parts than internal combustion vehicles and are less expensive to maintain. Regular oil changes will be a thing of the past, and thanks to regenerative braking — using deceleration to generate power to recharge the battery — you won’t need to replace your brake pads as often.

Overall, it’s a good idea to do your EV research and determine your savings before making the leap to electric.

The answer to this one is more nuanced than a true or false answer. Current battery chemistry relies on lithium. Lithium is commonly mined out of the earth in huge pits or extracted from the earth by pumping a brine solution into a bore hole and evaporating the solution in sprawling above-ground ponds. Neither option is environmentally friendly. Additionally, lithium mining will have to expand in lockstep to meet EV demand. But future mining sites could very well improve. One example is the planned mine site at California’s Salton Sea, which its backers promote as one of the least disruptive lithium prospects in the United States.

Oil extraction and transportation has its own issues, as high-profile incidents such as BP’s Deepwater Horizon and Exxon Valdez spills have demonstrated. Refining crude oil into gasoline and other petroleum products comes with its own environmental hazards, both in terms of soil contamination and harmful emissions.

Actually, yes, it is possible to recycle lithium-ion batteries. It’s just not economically advantageous to do that yet. There are several projects underway to make battery recycling more affordable, and it’s very likely that the company that pioneers the technology will reap huge rewards. In the event that lithium becomes scarce, that threshold for economic feasibility will also drop.

WHAT ABOUT CHARGING INFRASTRUCTURE?

Charging stations are becoming more common, and installing a charger in your home or business has also gotten much easier in the last decade. With the development of DC fast charging, many new EVs can replenish 200-plus miles of range in only 20 minutes. The hidden component to worry about is where that energy comes from. More than 60% of electricity in the U.S. is generated using fossil fuels. But the share of renewable energy has doubled since the 1980s, and trends suggest that the pace will accelerate.

With the expected increase in EV sales, power consumption will understandably increase as well, straining an aging power grid. In energy-challenged California, that could spell disaster during summer months when rolling blackouts are already common. For now, it seems that solar on every roof may be the most viable solution.

It’s best to equate electric vehicles to the idea of paying more up front and reaping the benefits after a year or two of ownership, in terms of both financial and environmental impact. The key takeaway is that over the life of a gasoline-powered vehicle — including manufacture — it will produce far more greenhouse gases than an electric vehicle, even in regions where oil and gas power generation is dominant.

This story was provided to The Associated Press by the automotive website Edmunds.

Pictured: This photo provided by Ford Motor Co., shows the upcoming 2022 Ford F-150 Lightning, that is part of a new generation of emerging electric vehicles. Ford Motor Co. via AP) 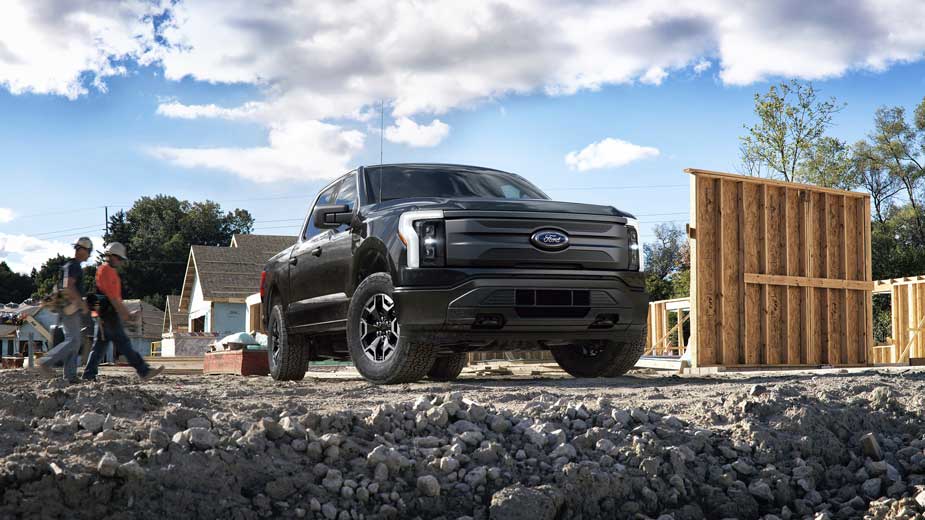