On the Menu: Favorites Feed on Customer Loyalty

YOUNGSTOWN, Ohio – Chrisi Economos takes a quick break from freshening up customers’ coffee cups at The Saratoga Restaurant to field a phone call. The salutation is brief.

The customer on the other end – recognized on the phone’s caller ID – orders the same thing every day, Economos says. She credits the restaurant’s long-time, loyal customer base for its 100-year history in downtown Warren.

“We have a lot of repeat customers, which is good,” she says.

Customer loyalty is the lifeblood of long-standing restaurants like The Saratoga, which has been a mainstay since opening in 1916. Economos’ grandfather, Harry, purchased the restaurant in 1935 with his brother, Nick. Harry’s son and Chrisi’s father, James, came on as manager in 1960. Chrisi Economos started working in the restaurant at 12 years old doing everything except cooking, she says. Now she and her brother, Eric, executive chef, are third-generation owners.

It took about a year to get the finances and the daily operation figured out after her father died three-and-a-half years ago, she says. And while she admits that being a third-generation restaurateur can be scary at times, she says it feels good. Her grandfather, who emigrated from Greece, instilled in his son and grandchildren a strong work ethic.

“He was old school. He came here when he was 15 years old. No money,” she says. “He would say, ‘Work for everything you have and don’t expect anybody to give you anything.’ ”

As the region’s economy rises and falls, keeping a restaurant running through the decades is no small feat. The lean years during the Great Recession took their toll, but restaurants like The Saratoga and Davidson’s Restaurant in Canfield are seeing increased business as cities like Warren and Youngstown develop their economies. Even restaurants well off the beaten path, like The Lock 24 Restaurant in Lisbon, are seeing more business.

Catering accounts for 70% of Saratoga’s overall business, Campbell says, with the company catering events in Warren as well as at the Tyler History Center and Stambaugh Auditorium in Youngstown.

And with businesses filling downtown Warren storefronts, entrepreneurs setting up shop in the Tech Belt Energy Innovation Center and The Robins Theatre restoration project underway, the city is noticeably on an upswing, she says. All of this spells good things for Warren, Economos says, which will ultimately benefit The Saratoga and other downtown businesses.

This summer brought more out-of-town customers too, she says. She met one couple who was driving around the region, eating at different restaurants. Others had been riding the bike trail and were staying at the Best Western Park Hotel downtown. “People riding far. I’m talking Toronto to [Washington] D.C.,” she says. She is seeing the younger generation coming in as well.

“We see people who came in when they were babies and now they’re married with kids,” she says. “The more things open downtown, the more people who will come downtown.”

Economos supports local business as often as possible, whether purchasing a cup of joe from Nova Coffee Co. around the corner, stocking produce for the restaurant or purchasing insurance, she says. For the fourth year, the Economos family is spearheading the annual Light up the Square in collaboration with the Trumbull Neighborhood Partnership.

Meanwhile, about a 45-minute drive south on state Route 11, business is “improving all the time” at The Lock 24 Restaurant, says Missy Campbell, restaurant manager.

“We’ve tripled the income of the restaurant in the last five years,” Campbell says.

That despite a tougher economy in the area, she says. When work in the Utica shale was strong in Columbiana County, business was booming, but as drilling decreased, Lock 24 saw its clientele dining out less often.

“They’re not spending as much as they did because the wells aren’t coming up as fast as they were,” she says. 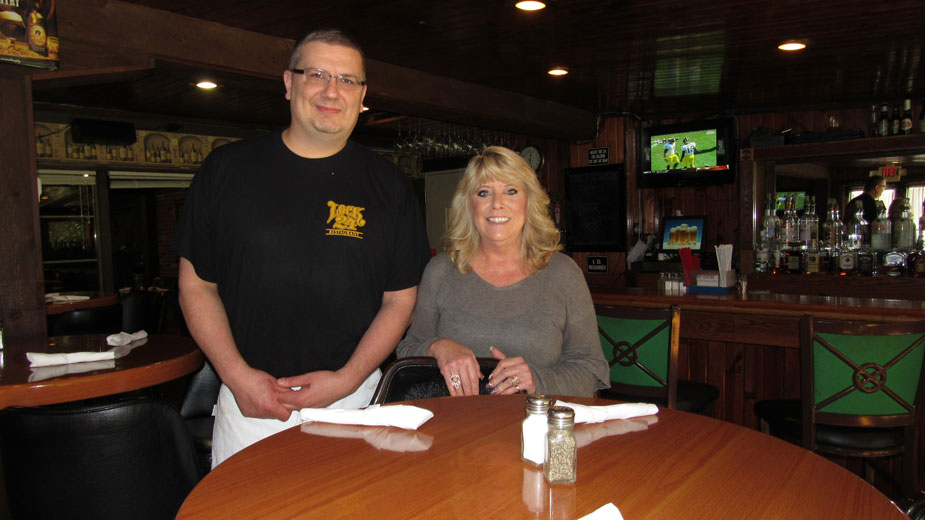 Lock 24, at 42087 state Route 154 in Lisbon, is far from a major population center, which makes attracting new customers a challenge, she says.

The historic nature of the restaurant helps make it a destination, however, and new customers have come as far as Canton, Steubenville or Beaver, Pa.

The original Lock 24 was part of the 33-lock system along the former Sandy and Beaver Canal, which ran from Bolivar on the Ohio and Erie Canal to Glasgow, Pa., where it entered the Ohio River.

In 1897, stones taken from the Lock 24 were used in the construction of a barn on the property that would be converted into the restaurant in the 1970s. The stones today are part of the lobby wall leading into the main dining area. It has since gone through four ownerships, with Randy Perrino being the current owner.

Lock 24 is known for its steaks, ribs and large portions, which have been reviewed well in regional newspapers, says Brian Lauther, executive chef. One of the most popular dishes is its 24-plus-ounce porterhouse steak, and its lobster bisque was given the Taste of Salem award. The hearty soup features chunks of lobster, carrots, celery and onions, simmered in a lobster béchamel sauce and finished with fresh herbs.

Much of the food is locally sourced, including meats and proteins from a local butcher and in-season produce from county farmers and a local orchard, he says. “We support 4-H Club, so we’ll get hogs from there,” he says.

Like The Saratoga, Lock 24 relies on repeat customers, Campbell says. In addition to supporting 4-H, the company donates gift certificates for community fundraisers and school events and tries to engage with the community whenever possible, she says. Maintaining stability with its serving staff is important as well because the employees get to know the regular customers by their first names, she says.

“We’ve kept the same staffing for quite a while,” Campbell says. “So I think that helps. It’s not new faces every time somebody comes in.”

Private dinners for up to 60 people in the banquet room help, although they make about 2% of the overall business. Lock 24 is popular for holiday parties, wedding receptions and weekend baby showers, Campbell says.

Davidson’s Restaurant in Canfield has seen an uptick in private events as well, making up about 10% of its business. The restaurant recently installed doors to one of its dining sections so it can be closed off for private events of up to 90 people, says owner Frank Davidson. Another private dining room can accommodate up to 40.

“Almost every day we have something booked,” Davidson says. “Sometimes we have two or three events in a day.”

Davidson saw more younger customers when he first opened the restaurant 25 years ago, but now the clientele is typically in their 40s to 60s, he says. Years ago, Davidson would try drawing in younger crowds with bands and DJs in the tavern part of the building, but stopped doing it because of the people it drew. During a band night, customers would “tear up the bathrooms and parking lot” and caused too many problems, he says.

“After band night, it was always hold your breath and see what was broken,” he says. “So we quit that years ago.”

Instead, he focuses on maintaining what the restaurant is known for, he says. Fish Fridays are the busiest days for the restaurant, and executive chef, William Fagan, says customers look forward to his Saturday dinner program, which features three or four upscale, creative specials.

“Usually I try to do a filet medallion, chicken dish, seafood dish or a pork dish,” Fagan says. “Last time we had a green peppercorn sauce with the filets.” 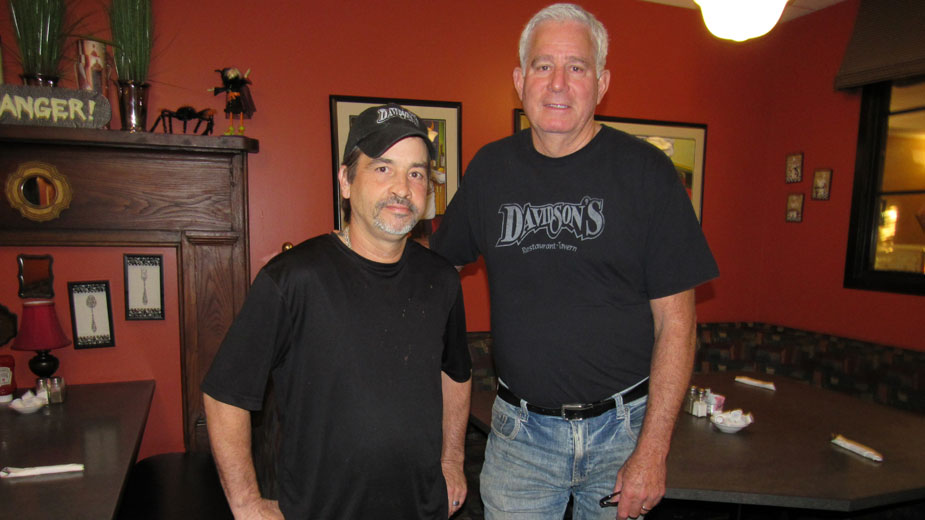 Pictured: Of the 25 years that Frank Davidson, right, has owned Davidson’s in Canfield, William Fagan has been executive chef for 19 of them.

Smoked meats on Saturday are popular as well, including lamb, brisket and chicken wings. This is Davidson’s third year with the smoker, which has proven especially popular during football season. While the Saturday specials are priced a little higher than typical menu items, Davidson tries to keep them below $20 to compete with restaurants on U.S. Routes 224 and 422, he says.

And then there’s the traffic.

With a site close to where Tippecanoe Road becomes Meridian Road, Davidson recognizes that it takes more effort to get to his restaurant, but it’s worth the drive to be away from the hustle and bustle of the busier corridors, he says.

“We’re off the beaten path. It’s a negative in one way but it’s a positive in another,” he says. “You don’t have the traffic here that you’ve got on 224 or 422. Plenty of parking. We are a destination restaurant.”

Davidson and Fagan are gearing up for the restaurant’s busy holiday season, including banquets and buffets. The Thanksgiving day buffet draws as many as 350 people between the two seatings. Reservations are $19.99 and typically sell out, Fagan says.

Overall business is up, with food service at Salem Hills Golf & Country Club and a lunch buffet supporting business at Davidson’s.

Economic development efforts in downtown Youngstown give him some hope for the next 25 years, he says. With good news coming out of the Youngstown Business Incubator and Youngstown State University, the forthcoming TJX Companies Inc. HomeGoods distribution center and the downtown amphitheater and riverfront park project under construction, he expects the restaurant to see increased business.

“It’s always good to hear of new businesses coming in, especially ones that are employing 500 or 1,000 people,” he says. “As far as how it impacts us, I’m sure it does.”

Pictured at top: As the third-generation owners of The Saratoga, Chrisi and Eric Economos keep the memory of their grandfather, Harry Economos, alive. His photograph hangs behind the counter of the Warren restaurant, along with pictures of his 1937 Packard, which is stored at the National Packard Museum, a five minute drive down the road.