By MATTHEW PERRONE and MARION RENAULT Associated Press
NEW YORK (AP) — With coronavirus cases surging and families hoping to gather safely for Thanksgiving, long lines to get tested have reappeared across the U.S. — a reminder that the nation’s strained testing system remains unable to keep pace with the virus.

The delays are happening as the country braces for winter weather, flu season and holiday travel, all of which are expected to amplify a U.S. outbreak that has already swelled past 11.5 million cases and 250,000 deaths.

Laboratories warned that continuing shortages of key supplies are likely to create more bottlenecks and delays, especially as cases rise across the nation and people rush to get tested before reuniting with relatives.

“As those cases increase, demand increases and turnaround times may increase,” said Scott Becker, CEO of the Association of Public Health Laboratories. “So it’s like a dog chasing its tail.”

Lines spanned multiple city blocks at testing sites across New York City this week, leaving people waiting three or more hours before they could even enter health clinics. In Los Angeles, thousands lined up outside Dodger Stadium for drive-thru testing.

“This is insane,” said 39-year-old Chaunta Renaud as she entered her fourth hour waiting to enter a so-called rapid testing site in Brooklyn on Tuesday. Renaud and her husband planned to get tested before Thanksgiving, when they will drive to pick up her mother for the holiday. “We got tested before and it wasn’t anything like this,” she said.

On the one hand, the fact that testing problems are only now emerging — more than a month into the latest virus surge — is a testament to the country’s increased capacity. The U.S. is testing over 1.5 million people per day on average, more than double the rate in July, when many Americans last faced long lines.

Gronvall said the current testing rate “is on its way, but it’s nowhere close to what’s needed to shift the course of this epidemic.” Many experts have called for anywhere between 4 million and 15 million daily tests to suppress the virus.

Trump administration officials estimate the U.S. has enough tests this month to screen between 4 million and 5 million people a day. But that doesn’t fully reflect real-world conditions. The tests used at most testing sites rely on specialized chemicals and equipment that have been subject to chronic shortages for months.

Adm. Brett Giroir, the U.S. official overseeing testing, downplayed reports of lines and delays earlier this week. In some cases, he said, lines are caused by a lack of scheduling by testing locations, which should stagger appointments.

“I’m sure that is going to happen from time to time, but we’re aggressively helping states in any way that we can if there are those kinds of issues,” Giroir said Monday.

Marguerite Wynter, 28, stood in line for more than two hours to get a test Monday at a Chicago site. She plans on flying to see her mother in Massachusetts for Thanksgiving and staying through Christmas. Massachusetts requires visitors to quarantine for two weeks or show proof of a negative test.

“It’s just more to be safe being around my family,” Wynter said. “It’s just to have peace of mind to know that I’m OK.”

In California, health officials have given mixed messages about whether residents should get tested before the holiday.

San Francisco’s Department of Emergency Management warned that people should not use a test to determine if they can travel. But Contra Costa County, across the bay, suggested anyone insistent on gathering with friends or relatives should get tested.

On Tuesday, federal regulators authorized the first rapid coronavirus test that can be done at home. It delivers results in 30 minutes and will cost roughly $50. But the test kit from Lucira Health will be available by prescription only, and it won’t be rolled out nationally until the spring.

As bad as the wait for testing has become, it is still better than in July, when the U.S. was almost entirely dependent on tests that often take two or more days for labs to process, even under ideal conditions. As cases surged past 70,000 per day, many people had to wait a week or more to learn their results, rendering the information almost worthless for isolating and tracking cases.

In recent months, federal health officials have distributed roughly 60 million rapid, point-of-care tests that deliver results in 15 minutes. Those have helped ease some of the pressure on large labs. But not enough.

Since Sept. 15, the daily count of U.S. tests has increased nearly 100%, based on a seven-day rolling average. However, the daily average of new COVID-19 cases has increased over 300%, to more than 161,000 as of Wednesday, according to an AP analysis.

This week, Quest Diagnostics warned that mushrooming demand for testing has increased its turnaround time to slightly more than two days.

The lab company said operations are being squeezed by shortages of testing chemicals, pipettes — the slender tubes used to measure and dispense chemicals — and other supplies. Those items are produced by a small number of manufacturers worldwide.

Facing supply constraints and spiking demand, many hospitals have been forced to send some COVID-19 tests out to large labs like Quest for processing, delaying results for patients.

“If I can do the COVID test in-house, we’re talking a small numbers of hours. If I have to send it to a reference lab, we’re talking about days,” said Dr. Patrick Godbey, laboratory director at Southeast Georgia Regional Medical Center.

Godbey emphasized a stark point that health officials have been making for months: The U.S. outbreak is too large to be contained by testing alone. Americans must follow basic measures such as wearing masks, social distancing and frequent hand-washing.

“You can’t test yourself out of a pandemic,” said Godbey, who is also president of the College of American Pathologists.

On Tuesday, in line outside a Brooklyn urgent care clinic — her second attempt to get tested that day — Monica Solis, 28, echoed that sentiment. “The lines are a reminder we’re still going through this and we don’t have a perfect response yet,” she said.

Pictured: Student nurse Ryan Eachus collects forms as cars line up for COVID-19 testing at a testing site set up the OC Fairgrounds in Costa Mesa, Calif. With coronavirus cases surging and families hoping to gather safely for Thanksgiving, long lines to get tested have reappeared across the U.S. (AP Photo/Jae C. Hong, File) 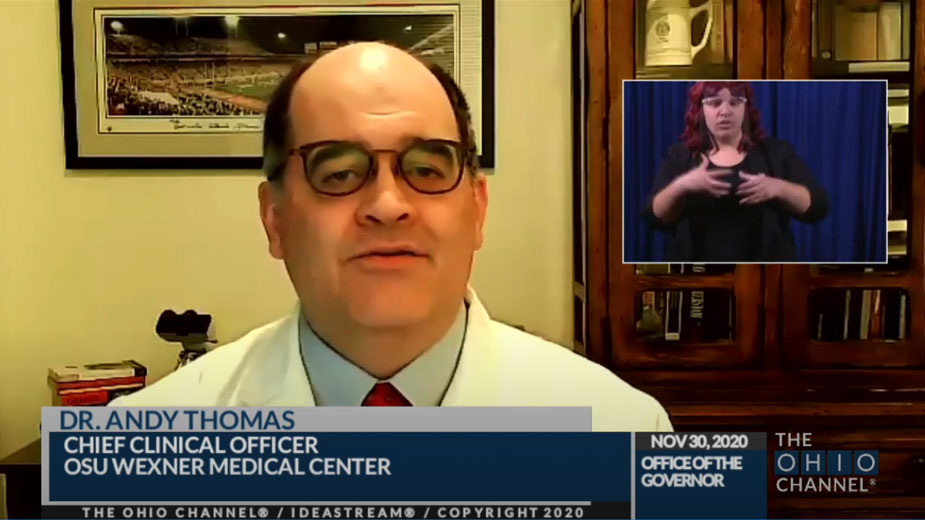 Amid Record Hospitalizations, Providers Urge Ohioans to Pull Back 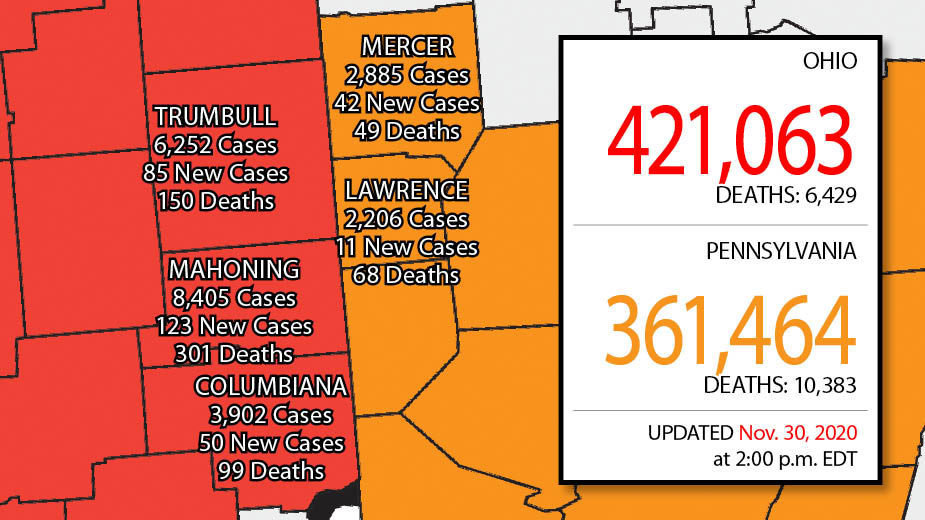 YOUNGSTOWN, Ohio – Coming out of the Thanksgiving holiday weekend, total new cases reported in Ohio and Pennsylvania are down […] 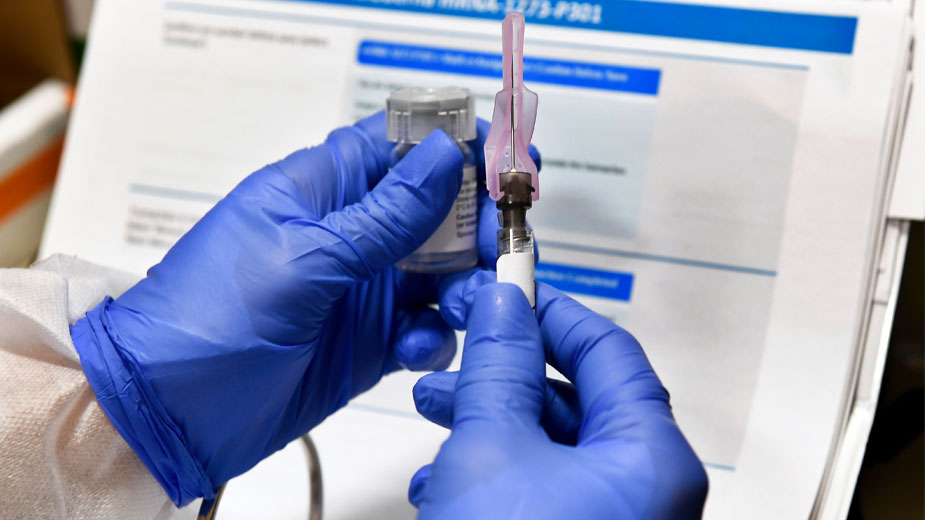 Moderna Asking US, European Regulators to OK Its Virus Shots

By LAURAN NEERGAARD AP Medical WriterModerna Inc. said it would ask U.S. and European regulators Monday to allow emergency use […]