LORDSTOWN, Ohio – Four years in the making, the new Lordstown Energy Center stands as an example of how advanced technology is reshaping the industrial landscape of the Mahoning Valley, officials say.

“This is about what’s coming, about what is next,” says James Dignan, president and CEO of the Youngstown/Warren Regional Chamber. “This is a great day for the Mahoning Valley.”

Dignan was among a host of community leaders and media invited to an open house Wednesday at the Lordstown Energy Center – a $1 billion combined cycle electrical generation plant that began operations earlier this month.

Representatives from Trumbull County, the village of Lordstown, the Lordstown School District, and the chamber were provided with an up-close look at a project that has taken at least four years to reach this stage.

“This was a long time coming,” Mayor Arno Hill says. “Construction started in June 2016, but it took 27 months of work before that.”

Hill says the energy center’s presence is an all-around benefit to Lordstown and its school district. An independent study conducted during the planning phase of the plant determined that the Lordstown Energy Center could result in an economic impact of more than $13 billion over the next 40 years.

The energy center will provide more than $1 million annually to Lordstown schools over the next 15 years, and another $1 million donation helped the schools build a new stadium to support several sports. At the same time, the project created about 900 temporary construction jobs for tradesmen during the building phase.

“We’re all happy that they’re here,” he says.

The plant has the capacity to generate 940 megawatts of electricity, enough to provide power to about 850,000 homes. Lordstown Energy Center generates power and then sells it to the PJM electrical grid, a large electrical transmission network that serves states in the mid-Atlantic region and parts of the Midwest, including Ohio.

Yet the technology used at the new plant is indicative of the new direction of the energy industry is taking. The Lordstown Energy Center is a combined-cycle generation plant, that is, it uses natural gas as its main fuel stock to power two large turbines. The heat generated from those operations is mixed with water and converted into steam, which is then used to power a large steam turbine.

“It’s one of the most efficient in the country,” says Drew Schneider, plant manager. “The big thing is natural gas. There’s a large volume of it, especially in this area.”

The Lordstown Energy Center’s proximity to the Utica shale play in Ohio and the Marcellus shale play in Pennsylvania – together one of the largest natural gas repositories in the world – ensures a steady stream of fuel supply for decades. That fuel supply is delivered to the plant through a single pipeline, which sits on 16 acres along Henn Parkway at the Lordstown Industrial Park. 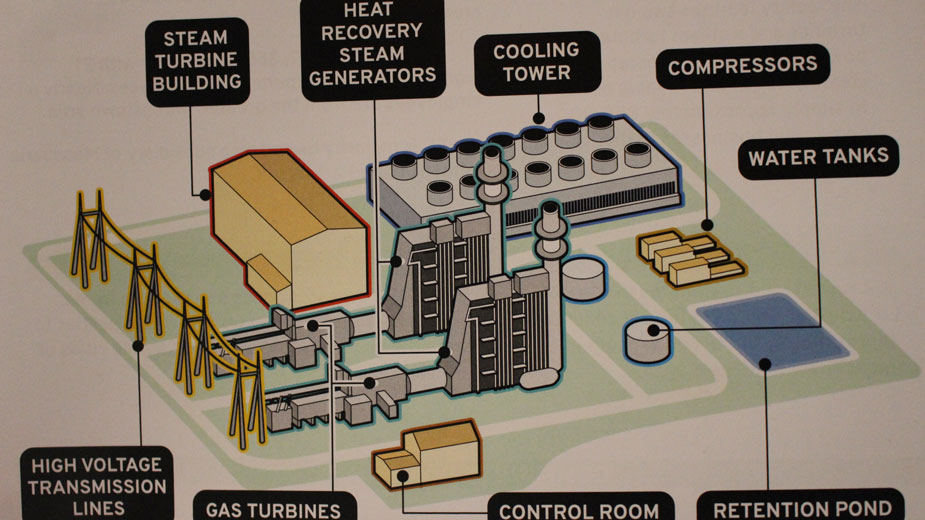 Indeed, with the exception of transmission lines sending power out, natural gas being pipe in, chemicals trucked in, and water supplied to the plant, everything regarding the operation is self-contained with little waste, Schneider says.

Far less efficient are the coal-fired plants that today are having a difficult time of competing in the market. Measured by the plant’s “heat rate,” or the amount of energy used to generate one kilowatt of electricity, the Lordstown Energy Center has proven far more efficient than older plants, he says.

“The efficiencies are in these gas turbines,” he says. “Our heat rate is about 6,500 [British thermal units]. Coal is much more than that.” Moreover, the plant does not have to deal with environmental issues caused by coal emissions and byproducts such as ash and sulfur. And, major transportation and logistical problems are alleviated, since the natural gas is simply pumped into the site via pipeline, whereas coal is carried in by rail car or truck. “We don’t have to worry about piles of coal at the site.”

The Lordstown Energy Center is one of six facilities in the United States that uses Siemens H-class Flex-Plant technology. Natural gas is fed into the site through a pipeline and into a compressor station at the east side of the development. The gas is then transmitted to two large natural-gas turbines, each of them connected to two towering heat recovery steam generators.

“The heat exhaust from the turbines reaches about 1,100 degrees,” Schneider says. A three-stage boiler in the heat recovery system converts water into steam, and the excess heat from the stack is about 180 degrees. “We remove about 900 degrees of the exhaust.”

The plant’s three generators collectively produce about 200,000 volts but that increases to 345,000 volts by the time it moves out of the transmission lines, Schneider says.

A single control room in a small administration building at the site governs most of these operations, he says. There, two operators, Chris Borsic and Matt Wymer monitor 20 different screens that display the real-time conditions of all the operations at the plant. “This is the nerve center of the operation,” Schneider says. “You can pretty much operate every piece of equipment from inside there.” 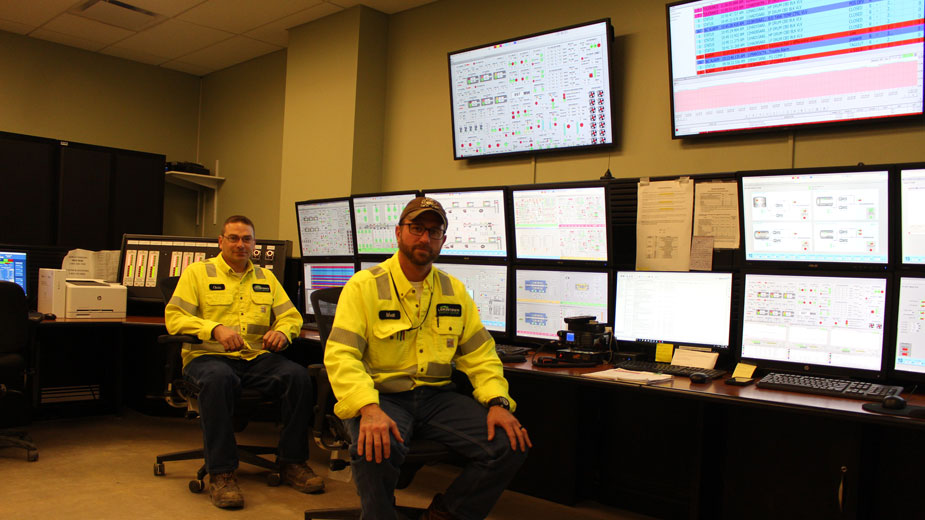 Pictured: Chris Borsic and Matt Wymer, operators of the control room at the Lordstown Energy Center.

Normally, it would take just a single operator to staff the control room, Schneider says. However, the plant is using two at the moment because Lordstown Energy Center is still very early into its operations.

Another employee monitors the equipment from outside the control room, listening for any unusual sounds or looking for any noticeable issues that might become a problem in the future. “Before something happens, we could swap equipment or grease a bearing.”

The new plant employs 21 full-time, Schneider says, and about 100 tradesmen are still on-site placing the finishing touches on the plant.

“They’re finishing up some of the odds and ends,” he says.

YOUNGSTOWN, Ohio – The Ohio Power Siting Board has rejected a proposal by a subsidiary of FirstEnergy to erect six miles of transmission line through downtown Youngstown. FirstEnergy proposed the line to improve reliability of electric service to downtown and…