Sponsored By:
Piggyback Foundation of Youngstown

YOUNGSTOWN, Ohio — By all accounts, Landen Fitzgerald is a typical 8-year-old boy. He plays football during recess at McGuffey Elementary in Youngstown, likes making sandcastles and enjoys playing games with his siblings.

For about four years of Fitzgerald’s life, however, playing at a public park was impossible.

In 2015, he was diagnosed with acute leukemia, which left him immunocompromised, increasing the risk of infection. It also meant missing days at school for treatment and chemotherapy.

While researching ways to help Fitzgerald keep up with academics, his mother, Lisa, discovered The Piggyback Foundation of Youngstown, a nonprofit that supports families dealing with life-threatening illnesses.

While other organizations help to cover medical costs, Piggyback focuses on fulfilling quality-of-life needs that families struggling with the financial realities of serious illness typically cut.

The organization’s founder, Janelle Nagy, says Lisa Fitzgerald contacted her and was determined to bring the park to Landen and his siblings.

“She asked if anyone had a used swing set for sale,” Nagy recalls. “Landen is immunocompromised and can’t go to the playground. And that means that the other children in his family couldn’t go anywhere.”

In May 2016, using funds from the organization’s first Chocolate Fest, Nagy worked with Wayside Furniture in Columbiana to purchase a swing set with siding board, sandbox and look-out tower. Local volunteers helped to move the swing set and set it up in the family’s backyard.

Landen’s family was the first family that Piggyback “adopted,” Nagy says, and received additional support throughout the next 2½ years. This included school supplies for Landen and his brothers, Sylas and Aiden, an all-inclusive long-weekend trip to Kings Island near Cincinnati, pizza nights, bowling, Christmas gifts and tickets to a World Wrestling Entertainment event at the Covelli Centre.

The organization also arranged for tutoring for Landen and helped pay for books and fees for Sylas to attend the Summer Honors Institute at Youngstown State University.

And last July, when the family learned that Landen’s cancer was in remission, Piggyback sent a limousine to take the entire family to the hospital when he had his port removed. A month later, that was followed by a celebration with friends and family at Extreme Air Trampoline Park in Boardman.

Piggyback “helped tremendously” during a time when there was a lot of pressure on Landen’s parents, who both work, says his father, Walter Green.

“It took a big burden off of us financially when Piggyback stepped in,” Green says. “It’s not there just for sick kids. It’s there for the whole family.”

Helping the entire family is at the heart of the mission of the foundation, because it’s important to keep the family strong and supporting each other during an illness, Nagy says.

“Whether it’s a child that’s sick, or parent that’s sick,” she says, “everybody fights together when you have a serious disease.”

Since starting The Piggyback Foundation of Youngstown in 2016, Nagy and her board of 20 volunteers have served 14 families who are struggling with a life-threatening illness.

Nagy structured the nonprofit after the original Piggyback Foundation in Norwalk on which she was a board member two years before moving to the Youngstown area in 2013.

Each family is assigned a volunteer a liaison who checks in regularly to see how they’re doing and if there is anything they need, she says. They also follow the families on Facebook.

“There are families that we’ll see who are having a rough week,” she says. “And just stopping by and putting a gift card for pizza and movies in their mailbox, so when they come home on Friday afternoon they have that, is a big difference-maker to them.” 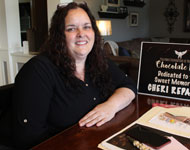 Repasky Supplies the Fun to Those in Need

Serious illness comes with serious costs. Beyond the hospital bills, treatments and medications, even the smallest kindness can bring a lot of value.

It’s something that Janet Repasky knows well. Her mother, Cheri, battled cancer nearly five years. During that time, she recalls the financial strain it put on the family.

“My parents never had any money worries,” Repasky says. “And then my mom got sick.”

Health insurance doesn’t always cover some of the needed treatments and tests, she says. So the money that usually went to quality-of-life purchases, such as going out for dinner, was spent on medical costs. Repasky recalls one Christmas when her mother was in treatment, the nurses at the hospital gave her a Christmas card with $30 in cash.

“You would have thought that they’d given her the world,” she says.

“Something’s got to give and a lot of times it’s the extracurricular activities that give when a family has somebody that has a serious illness,” Repasky says. “So you have to tighten your budget and just do the necessities.”

While Repasky could help her parents through their financial issues, many families lack that, she says. When her mother died in 2017, Repasky wanted to help the families who face the same troubles her parents did.

She took over Cheri’s Fudge & Candy, which her mother started more than 40 years ago, and used the profits to help her father as well as cancer centers. She also volunteered for charitable organizations, including The Salvation Army.

After moving to the Youngstown area 10 years ago from her hometown of Titusville, Pa., she met Janelle Nagy at the Davis Family YMCA in Boardman in 2016. Nagy told Repasky about the Piggyback Foundation of Youngstown, a nonprofit she founded that funds activities for families who struggle with illness, and Repasky wanted to get involved.

“I saw what these guys were doing for families, especially families that had serious illnesses,” she says. “So I thought this was just perfect for me. I think what they do is just amazing.”

When Nagy said she was “in dire need of someone to run a chocolate fountain” for the Chocolate Fest fundraiser of the foundation last year, Repasky brought her own fountain and chocolate, she says. Now as a board member and family liaison, Repasky works closely with families the nonprofit serves.

Last year, she met Brittany Decker and her daughter, Nya Williams. Nya’s father died when she was 2 years old. Two weeks later, she was diagnosed with leukemia, an illness she had fought for a year when the Piggyback Foundation reached out last winter to the family. By the spring, the foundation was working to fulfill one of her biggest wishes.

Piggyback organized a princess-themed birthday party at All the Little Birds in Boardman, including cupcake decorating, food, cake and free rein of the playground. Although the little girl’s compromised immune system was a concern, she proved resilient, Repasky says.

“I remember when we were leaving that night and she said, ‘This was the best party ever,’ ” Repasky recalls. “It was just a fun event.”

Repasky checks in often with Nya’s mother and helps when she can. When Nya feels well enough, she attends cheerleading and dance classes at Miss Dana’s Diamonds in Boardman free of charge. Piggyback will ensure that she has a costume in time for competition, Repasky adds.

To help Nya catch up academically, Piggyback arranged for a tutor to meet with her twice weekly for one-hour lessons.

“She’s learned a lot just in the few months that we’ve been working with her,” Repasky says. “We want to make sure she’s set up to be successful. She’s supposed to be done with treatment at the end of next summer, so they’re hoping to get her enrolled in kindergarten” by fall 2020.

From gift cards and care packages for when Nya is in treatment to a YMCA membership for her mother, Piggyback helps the family entirely through volunteerism.

“Nobody makes anything doing this,” Repasky says. “Everything that we earn and we get through fundraisers goes right back into the families that we support. That’s important to me.”

The organization also helps pay for extracurricular activities that are often halted so the family can pay for medical costs, she says. Piggyback has subsidized anything from karate lessons to dance classes to musical instruments for students.

Families are referred by social workers or can directly apply for assistance at PiggybackYoungstown.com. To be eligible for support, a family must have a member fighting a life-threatening illness, which is confirmed by a doctor, and must have a child younger than 18. Board members vote on each applicant.

Because some medical costs are not covered by insurance, even a family with means can still face financial hardship resulting from a serious illness.“You can be completely financially stable and the cost of medicine, the cost of care can change that whole world for you,” Nagy says.

On average, each family receives about $2,500 in goods and services and is adopted for at least a year, she says. Others are kept on longer if they face ongoing illness.

All funds are raised through grassroots efforts, including special events hosted throughout the year, the signature event being the Chocolate Fest. The first festival drew 90 people and raised about $1,800.

“We were overjoyed,” she says. “We were thrilled. By all accounts it was a success and we adopted our very first family the next week.”

Since then Piggyback has hosted four Chocolate Fests, with last year’s event raising more than $15,000, Nagy says. A list of upcoming events is on the website of the organization.

The foundation is staffed entirely by volunteers, so all money raised goes right to the families that Piggyback supports, she says.

In addition to funds raised, Piggyback receives a few small grants from organizations such as the Community Foundation of the Mahoning Valley and Akron Children’s Hospital, as well as corporate donors such as Continuing Healthcare Solutions, Nagy says.

“The money is not raised to sit in the bank,” she says. “So we try to use up most of our money with a small nest egg to turn over to the next year.”

Looking to the future, Nagy hopes to emulate the retail store of the Norwalk branch, the aptly named When Pigs Fly, which sells donated home goods and other products.

“They increase their awareness in the community unbelievably just by having that store downtown,” she says. “And it’s a steady stream of revenue all the time; because it’s all donations and they sell everything.”

For Landen Fitzgerald, he’s looking ahead, too. This July will mark one year in remission, and he has his sights set on starting third grade and facing his next challenge.

Community members can make a contribution to The Piggyback Foundation of Youngstown by volunteering their time, making a donation or attending one of its events.

The Piggyback Foundation is operated by a board of volunteers who partner with community organizations and businesses as well as donors. Volunteers work to refer families to the foundation and execute services.

Volunteers also serve on committees to help plan and execute events throughout the year. Anyone who wishes to volunteer can contact the foundation at its website, PiggybackFoundation.com/contact or by calling 248 200 8032.

For monetary donations, the guide is at PiggybackFoundation.com/donate. Donors can contact the foundation or mail checks payable to Piggyback Foundation of Youngstown at P.O. Box 3184, Boardman, Ohio 44513.

Anyone interested in applying for services through the foundation can do so by filling out the form on the Services page of the website.

Messages of Gratitude Outside Trumbull Regional

Trump Sees Limits of Presidency in Avoiding Blame for Virus

After Virus, How Will Americans’ View of the World Change?