Rent’s Due, Again: Monthly Anxieties Deepen as Aid Falls off

By RUSS BYNUM Associated Press
Another month passes. The coronavirus pandemic marches on. And Americans struggling amid the economic fallout once again have to worry as their next rent checks come due Aug. 1.

Many left jobless by the crisis are already behind on payments. And the arrival of August brings new anxieties. A supplemental $600 in weekly federal unemployment benefits that helped many pay their bills is set to expire as July ends, with Congress bogged down in disagreement over a new round of aid.

Also set to end, unless lawmakers intervene, is a federal moratorium on evictions that has shielded millions of renters — though some Americans remain protected by similar state and local actions.

The Associated Press reconnected with renters first interviewed ahead of their April payments. Four months later, some have returned to work. One saw her church step in to cover her rent. Some found landlords willing to negotiate, while others are still looking for relief.

Sakai Harrison moved to New York to try to make it as a personal trainer and designer – but his gym shuttered early in the pandemic, and after weeks of struggling to both pay the rent and put food in his fridge, he knew what he had to do.

He moved back to Georgia for greater stability.

In May, he left his Brooklyn apartment and its $1,595 monthly rent for Atlanta. When the first of the month rolls around, his new place costs about $400 less – and it’s larger.

“This is the biggest silver lining I’ve ever seen,” he said.

He’s training with a few one-on-one clients, and he’s launched a boot camp with a dozen more.

This week, he met four of them at a park, where they did lunging squats, pull-ups, and a military-like crawl. Harrison then led them into a gym for dumbbell exercises. They didn’t wear masks for virus protection – Harrison says they take precautions, but pointed out that the state doesn’t mandate face coverings.

Harrison modeled the proper form and pace, corrected the men when needed, and gently teased when they tired or slowed down. Some shot barbs back, and Harrison smiled.

He’s charging clients slightly less than he got at Blink Fitness in New York, but that amount’s helping him develop an apparel brand. He’s taking orders for a line of shoes, T-shirts and hats.

Financial challenges keep piling up for Roushaunda Williams months after she lost her job of nearly 20 years tending bar at the Palmer House Hilton Hotel in downtown Chicago.

Potential reopening dates for the hotel have been pushed back, Williams said, and hospitality jobs remain scarce. She anticipates being unable to pay her $1,900 rent by September — especially if Congress doesn’t reauthorize the weekly $600 in additional unemployment aid as part of a new relief package.

Williams, 52, said she asked the management company that owns her apartment for a rent reduction or other help. So far, she’s been told her rent will just accrue if she can’t pay.

The Illinois governor recently extended a moratorium on evictions into August. Still, Williams worries about debt piling up while she’s unemployed.

“I’ve exhausted my savings,” she said. “So I don’t have a safety net at all now.”

Jas Wheeler once hoped to ride out the pandemic and return to work at a Vermont bakery. Not anymore.

Wheeler, 30, is immunocompromised and fears going back to the bakery would increase risk of infection. The former social worker started working at a small grocery store that pays less but allows more room for social distancing.

Wheeler took the gig in anticipation of losing the $600 weekly unemployment aid. That money ensured Wheeler and their wife, Lucy, could afford their $850 monthly mortgage payment.

The couple closed on their house in Vergennes the same day Wheeler was laid off in March. Wheeler’s wife kept her jobs, but money remains tight. They’ve sold a car and are growing some food.

“The unemployment without the enhanced benefit is not enough to live on at all,” Wheeler said. “We’re broke.”

Though the pandemic took away Itza Sanchez’s two incomes, it has strengthened her faith. The mother of two says the generosity of her Richmond, Virginia, church has saved them from hunger and eviction.

Sanchez fell behind on rent when she stopped selling homemade tamales and collecting scrap metal over fears of contracting the virus. By mid-July, she owed about $950 in unpaid rent. That’s when Sanchez got a notice to vacate the mobile home where her family lives.

She was spared when her church sent $800 directly to the landlord.

Now she’s trying to scrape together $460 for August’s rent. She gets food donations from church. The school system delivers lunches for her children, 11 and 7.

An immigrant from Honduras, Sanchez isn’t eligible for unemployment benefits.

“In this crisis we have moments of anguish, and one feels desperate, Sanchez said.

“But I have been blessed so far.”

She lost her sommelier job in mid-March, when restaurants closed in Nashville, Tennessee. She was just getting by on unemployment, but worried about choosing between losing benefits or going back to an unsafe restaurant job.

Then a former boss offered her a spot at a new restaurant – the White Limozeen, named in tribute to a Dolly Parton song and decorated in over-the-top kitsch.

While Larson still fears the virus, she appreciates that her employer “spent a lot of money to make sure people are extremely safe.”

At her duplex, a plumbing disaster forced her to live in a construction zone for a couple of months. But she counts that as luck: She didn’t have to pay rent.

Jade Brooks and her family have counted on an eviction moratorium in Massachusetts to get them through the pandemic. Still, 22-year-old Brooks worries: How long will it last?

Her family had an August eviction hearing scheduled in court after they refused to pay the $265 increase. Then the governor extended the eviction ban until mid-October, giving temporary relief.

“It kind of gave me extra hope to figure things out, instead of jumping into the fire,” said Brooks, who lives with her mother and an 8-year-old cousin.

Brooks hopes the extra time gives her mom a chance to find work, and perhaps they’ll negotiate a new lease rather than go to court.

After two months of missing payments as part of a “rent strike,” Neal Miller and his housemates heard from their landlord.

Miller, 38, said his landlord gave the impression that he’d prefer some income from the house over nothing at all.

Miller’s last stable job was as an adjunct professor at Loyola University. During the pandemic, he’s patched together odd jobs — dissertation editing, bookkeeping for a psychiatrist’s office.

He said lower rent cuts the pressure: “We are definitely in a unique situation by the response we got.”

Tnia Morgan’s family has grown by one since the pandemic upended their lives. The birth of a grandson, her youngest daughter’s first child, June 25 was a rare blessing during a spring and summer otherwise filled with stress.

“I love his smell. I love his smile. I love everything about him,” said Morgan, who shares a townhouse in Baltimore County, Maryland, with her newborn grandson, her daughter and a nephew.

She needed something to celebrate. Her income plummeted after she lost her hotel banquet-hall job in March. Bills pile up monthly.

Four rent checks have come due since then. Morgan’s landlord lets her pay what she can. She estimates that’s been nearly half what she’s owed since April.

Food stamps help feed her family. She says she’s tried in vain to sign up for unemployment benefits. Her only income comes from working for a food delivery service.

“It’s not much,” she said, “but it’s better than not having anything.”

Ruqayyah Bailey has lost much of her independence and wants to get her life back on track.

Bailey, 31, has autism. Until March, she lived in her own apartment, worked part time as a cashier at a St. Louis cafe, and attended college.

The coronavirus tossed all that structure out the window. Bailey could no longer get the one-on-one tutoring that helped her thrive in college. The cafe closed. With no money coming in, she moved back in with her mother.

The cafe reopened in June, but Bailey now works just four hours a week. She’s signed up for seven hours of college classes but isn’t sure she’ll get tutoring. She uses savings to pay bills and worries about losing her weekly $600 in extra aid.

“I am completely stressed,” Bailey said. “I don’t know how to pay my bills. I’m not sure how I’m going to able to get back into my apartment.”

Jason W. Still spent nearly three months without work before he went back to cooking at a high-end restaurant in Spokane, Washington.

Still, 30, returned to the kitchen at Clover when it reopened in early June. Before then, his wife’s job in Washington’s legal marijuana industry and Still’s unemployment checks helped assure they never missed a rent payment.

Still is back to working 40 hours a week. But he wonders whether that’ll last, as COVID-19 infections surge in the U.S.

“It’s terrifying to me to be in a service industry that can just shut down again at any time,” he said.

Tinisha Dixon scraped money together to cover her $1,115 monthly rent for April and May. Since then, she’s been unable to pay.

Dixon, 26, shares a downtown Atlanta apartment with her partner and their five children. Before that, Dixon was homeless. Now she worries daily about her family ending up on the street.

Dixon’s partner works as a security guard, but reduced hours have shrunk his earnings to about $800 a month. Dixon said she worked briefly at a coronavirus testing site outside the city, but relying on her partner for rides interfered with his job.

Before the pandemic, Dixon says, her landlord had begun taking legal steps to evict them.

“I’m pretty overwhelmed trying to get everything situated, not knowing how long I can hold out here,” she said.

Eli Oderberg of Denver remains out of work. He lost his job at a Colorado energy company in a wave of mid-April layoffs sparked by the pandemic’s economic fallout.

Oderberg, 36, once worked on apps to track spills and leaks. Now he receives unemployment benefits as he sends out resumes and interviews for new jobs. He said he’s been a runner-up for several positions but hasn’t been hired.

Oderberg and his wife, Katie, have been making their mortgage payments. She’s on unemployment after losing her retail job. She’s also pregnant, and the couple fears running out of money after the baby arrives. They also have a 5-year-old daughter.

“I’m trying to get a good balance so I can enjoy my family,” he said. “And I keep reminding myself there are a lot of people in a much worse situation.”

Pictured: Sakai Harrison poses for a portrait after leading his clients through a rigorous workout on Wednesday, July 29, 2020, in Atlanta. Harrison moved to New York to try to make it as a personal trainer and designer – but his gym shuttered early in the pandemic, and after weeks of struggling to both pay the rent and put food in his fridge, he knew what he had to do. He moved back to Georgia for greater stability. (AP Photo/Ron Harris) 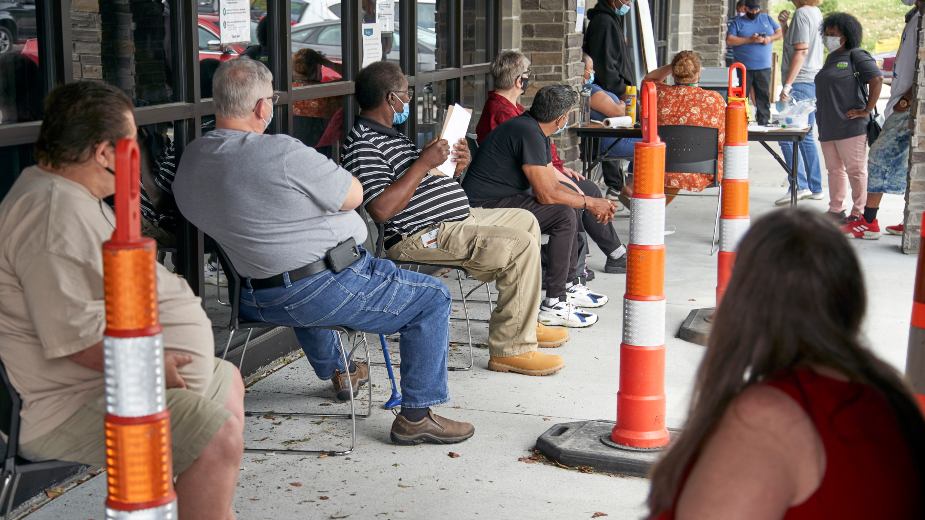 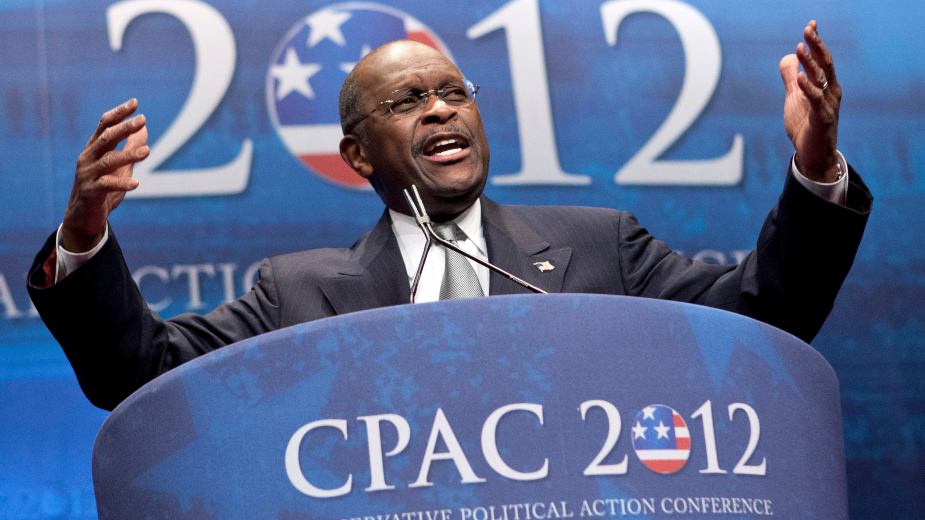 Herman Cain to be Mourned at Private Funeral in Atlanta 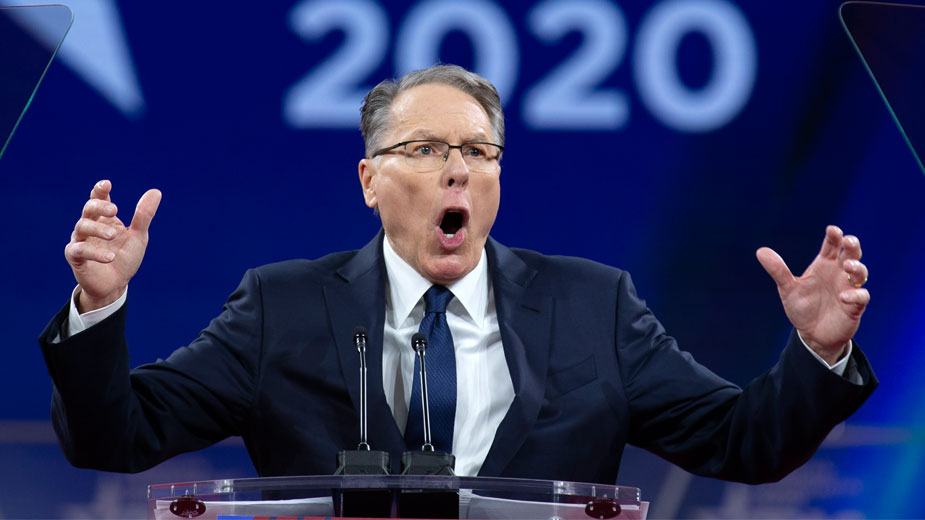