POLAND, Ohio – The owner of Stone Gate Condominiums development plans to have the new model for condos at the development completed by summer.

So far, the development has 24 units, four of which include up to 1,800 square feet of space on average, said Colette Anderson, new home consultant at Stone Gate. The new Rosewood floor plan design will offer four, two-bedroom units in each quad of approximately 1,900 square feet. All are one-story, open-concept units with a two-car garage attached, she said. 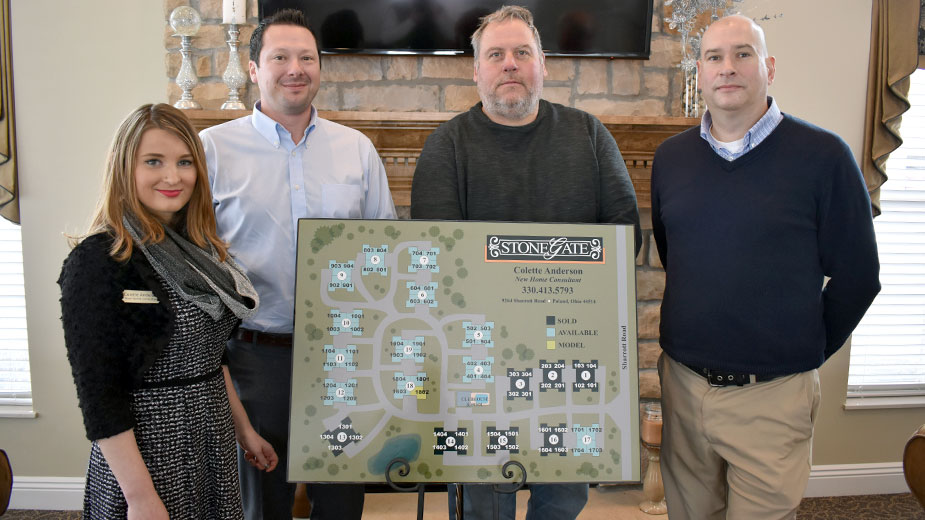 Once completed, Stone Gate will have 76 units.

“It is a regular house. It is an attached product, but it doesn’t give that feel when you’re in it,” Henn said. The units will sell for $245,000 each, plus homeowner association fee, which covers exterior maintenance such as landscaping, mowing and plowing.

Construction is underway now on the model for the site. “It’s hard to tell because of the snow but we have actually poured the footers,” Anderson said.

“My challenge right now is the elements, trying to go through the snow and get this building erected,” said Steve Greenhill, production supervisor, who heads the construction team at the site. “We’re waiting for concrete we can put in there so we can start framing. Hopefully, in four to six months, we’ll have the building up.”

Henn is optimistic that the unit should be up and running in the next six months, he said. “Hopefully, we can get it sooner.”

In addition to the amenities of the units themselves, Stone Gate also offers a clubhouse with fitness room, outdoor pool and a pond. The development is “minutes away” from shopping, dining and entertainment options in Boardman, she said.

“It’s a really great area to be in,” she said. “At the same time, it’s peaceful and relaxing in this community.”

Pictured above: Steve Greenhill, Tim Henn, Colette Anderson and Jason Burdette say the footers are poured, and with the snow, the model should be erected within the next six months.