US Schools Prepare Summer of Learning to Help Kids Catch Up

By HEATHER HOLLINGSWORTH Associated Press
MISSION, Kan. (AP) — After a dreary year spent largely at home in front of the computer, many U.S. children could be looking at summer school — and that’s just what many parents want.

Although the last place most kids want to spend summer is in a classroom, experts say that after a year of interrupted study, it’s crucial to do at least some sort of learning over the break, even if it’s not in school and is incorporated into traditional camp offerings.

Several governors, including in California, Kansas and Virginia, are pushing for more summer learning. And some states are considering extending their 2021-22 academic year or starting the fall semester early. Many cities, meanwhile, are talking about beefing up their summer school programs, including Los Angeles, Hartford, Connecticut and Atlanta — the latter of which considered making summer school compulsory before settling for strongly recommending that kids who are struggling take part.

“People are exhausted right now, but they know that it is really important for our kids,” said Randi Weingarten, the head of American Federation of Teachers, who has been calling for what she described as a voluntary “second second semester” and for districts to start recruiting for it.

The new $1.9 trillion coronavirus relief package should help, as it allocates $122 billion in aid to K-12 public schools, including $30 billion specifically for summer school, after-school and other enrichment programs.

The influx of money and increase in summer offerings has come as a relief to parents of kids who struggled with remote learning during the coronavirus pandemic. Among them is Ashley Freeman, of St. Paul, Minnesota, who quit her nursing assistant job when the pandemic began so that she could help her kids learn from home and because a frightening past bout with the H1N1 flu that landed her on a ventilator.

Freeman, 32, is eager to get back to work after having to rely on food stamps and other benefits to get through the pandemic. She feels her kids have fallen behind academically and is hoping they’ll catch up over the break — her district recently extended its summer program by two weeks.

“I need something where they keep their education going because they have lacked this entire last year,” she said late last month about an hour after her 11-year-old daughter and 6-year-old son returned to in-person classes for the first time in nearly a year. “I feel like the kids have struggled tremendously.”

Keri Rodrigues, a co-founder of the education advocacy group the National Parents Union, said her kids have floundered with remote learning even though she transformed the family’s suburban Boston living room into a classroom and hired them a tutor. She said her family isn’t unique.

“We don’t have any time to waste here,” she said. “We need to access where our kids are, determine what they need, and then get to work right away and not just put it off for three months for no apparent reason while our families continue to deteriorate and our kids continue to suffer.”

Engaging poor children should be a priority, educators say. Summer has traditionally been one of the most inequitable times in education, with kids from upper and middle income households getting to attend camps or take part in other enrichment activities that often aren’t an option for poorer ones, said Aaron Dworkin, the CEO of the National Summer Learning Association, a nonprofit focused on increasing investment in summer learning.

“This has been an epic aha! moment for the country to understand what lower income families have to struggle with over the summer,” Dworkin said. “Everything we are all dealing with in COVID is what they deal with every summer: ‘I am working. My kids have nowhere to go. I need to figure out how to do it.’ Now other people are seeing it.”

Connecticut Sen. Chris Murphy, himself the father of a third- and sixth-grader, said in a tweet that it was a “big win for kids” that the summer learning money can be used for camps and recreational programs, too. He had argued in seeking the funding that “if we simply assume that kids will be able to ‘snap back’ when things return to normal, we are fooling ourselves.”

Dworkin envisions summer programs offered through the YMCA or municipal park districts using the federal funding to expand their typical offerings of swim lessons and crafts by blending in academics.

That’s what the Boys & Girls Clubs of Central Minnesota plans to do, said Geri Bechtold, the group’s vice president of operations. It will combine music, dance, theater and other fun activities meant to lure students from two low-income St. Cloud elementary schools with academic help the district will provide.

“We find that kids eat up all of that,” she said of the mixed approach.

There will be more scholarships this year to help lower income students attend camp, said Tom Rosenberg, president and CEO of the American Camp Association. He said more than two-thirds of camps already have science, technology, engineering and math components. But he said camp also provides nonacademic benefits that are particularly important after a year of social distancing.

“I think there is a lot of anxiety right now about just being near their peers,” he said.

Parents also have raised concerns, with 62% saying they think their children are behind where they would be during a normal school year, according to a survey conducted by the National PTA and Learning Heroes, a nonprofit that helps parents support their children’s learning.

“It has been really painful for parents,” said Bibb Hubbard, founder and president of Learning Heroes, which also conducted focus groups with parents. “Literally parents say, ‘My child won’t take the blanket off of his head. They won’t get out of bed. They are in their pajamas all day.’ The worlds between home and school have just so blurred that the kids are just having a really hard time finding the motivation to stay present and stay in it.”

Pictured: Students wear protective masks as they arrive for classes at the Immaculate Conception School while observing COVID-19 prevention protocols in The Bronx borough of New York. Schools and camps across the county are making plans to help kids catch up academically this summer after a year or more of remote learning for many of them. (AP Photo/John Minchillo, File)

By MICHELLE CHAPMAN and ALEX VEIGA AP Business WritersCoinbase made a rousing debut on Wall Street Wednesday, with shares of […] 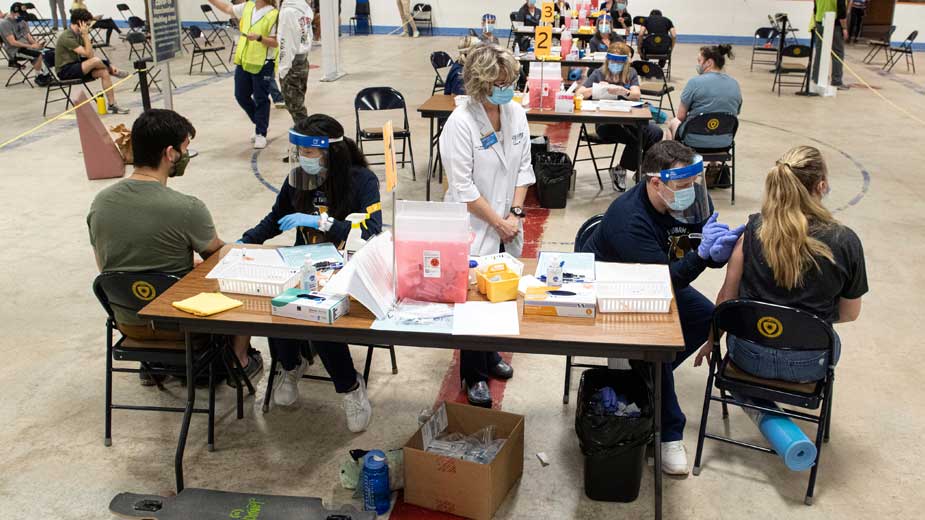