YOUNGSTOWN, Ohio – After 18 holes of golf, nothing sounds as relaxing as a cold drink and a sandwich while tallying up your score from a long game.

At the restaurant of Knoll Run Golf in Lowellville, many of its patrons are doing just that. But not all of them have just played golf.

“Our customers love the bar and restaurant because it’s a great place for them to hangout,” says Jenny Gaffney, manager of Knoll Run.

The golf course operated as Countryside Golf Course until the Gaffney and Marucci families purchased it in 2006. After months of renovation, it re-opened in 2007 as Knoll Run and included a restaurant and bar.

“Our customer base ranges from groups of golfers we have here, our corporate and charity golf outings,” she says, “and nongolfers who are just looking for a dinner.”

The menu at Knoll Run’s “19th hole” is based on “what goes well with a round of golf,” Gaffney says. It has a full list of appetizers, soups and salads, wings, sandwiches, wraps, flatbreads, pizzas and burgers.

Popular menu items include the Albatross Burger with roasted red peppers, onions and melted blue cheese, and the Wedding Soup Sandwich with grilled chicken, Italian greens, sausage and melted provolone served on a ciabatta bun. Both are plated with freshly cut fries.

In April, Knoll Run expanded its restaurant by adding a patio room and outdoor seating with views of the first, ninth and 10th holes.

The patio is covered and heated so it can be used year-round and has garage-door-style windows on three walls, allowing a breeze in the summer. A second bar was built for the patio, which has 11 drafts on tap, as well as wine and liquor.

Similar renovations took place at the Albatross Bar & Grill at the Mahoning Country Club in Girard, which replaced the snack bar two summers ago. The full-service restaurant was something the 120-year-old golf club needed, says co-owner Dave Ezzo.

“We thought the golfers would really appreciate it,” he says. “The clubhouse was old and dated. So we upgraded and wanted to make things nice for them.”

The restaurant was built next to the course and has three large windows for customers to watch golfers finish the front nine. The name of the restaurant, “Albatross,” comes from the term for a score of three under par, Ezzo says.

Favorites on the menu are the “double bogey” burger, which is piled high with barbecue-smoked pulled pork and clubhouse sweet and spicy coleslaw, and the Steak Clubhouse Special sandwich, sliced filet mignon grilled and smothered with sautéed peppers, onions and melted provolone on a toasted hoagie bun.

Since opening Albatross, “We have had a very good response. People come in who say they haven’t been here for a couple of years and they love what we did with it,” Ezzo says. “We’re hoping the restaurant will bring new golfers to the course.”

Two new customers who frequent the Mahoning Country Club, Girard, since Albatross opened are Dineen and Michael Kempe, owners of Dineen’s Jewelry & Gifts, a few streets away from the course.

Although the Kempes aren’t big golfers, the couple enjoys going to the restaurant for dinner and for holding private events.

“We started going there and I was impressed with the food and the look of the place,” Dineen Kempe says. “They did a beautiful job with it.”

Beyond the menu, 19th holes also offer a scenic setting for a relaxing evening. Off Western Reserve Road in Poland sits Another Round Bar & Grille at Reserve Run Golf Course.

The course opened in 1999 and the restaurant a couple of years later on the second floor of the clubhouse. It offers indoor and outdoor seating that overlooks the course, as well as the quarry lake that existed before the course was built.

“It’s a phenomenal view from up here,” says the general manager, Michael Ferranti. “We’re fortunate enough that the area we have here is unique with one of the best views in town.” 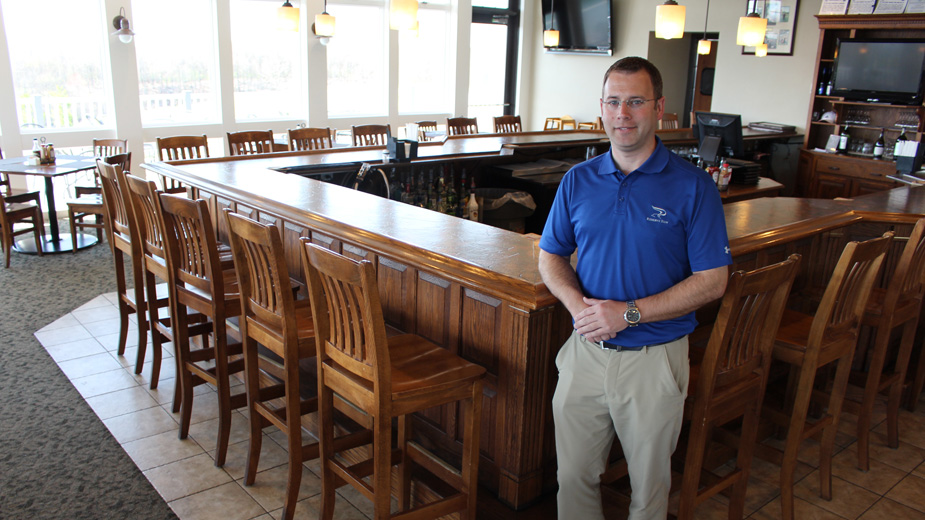 Pictured: Michael Ferranti is general manager of Another Round Bar and Grille at Reserve Run’s.

Ferranti says it’s common for golf courses to have a restaurant because, “It works well with the golfers. After golfing you can meet the group upstairs and have a bite to eat or drink with a great view.”

The restaurant also serves a lot of business people during lunchtime who want to enjoy the outdoors while eating, he says. Another Round is open from March through November and for private parties during the holiday season.

Starting this summer, the bar will have mixed-drink specials that change weekly and will feature beer on tap from Birdfish Brewing Co.

Chef Dan O’Bryant organized the menu, which ranges from casual items such as salads and sandwiches to dinner specials of pork chops, and ribs with homemade sauce and fish.

“Dan does dinner specials that are out of this world,” Ferranti says. “Our Friday fish is one of our most popular nights. The salmon has been very popular over the past year so we’re going to have a Norwegian salmon in both a salad and dinner entrée.”

Starting after Memorial Day, Another Round will have live music on its patio on every Wednesday night for the summer. “We tried it for four weeks last year and the response was overwhelming. So we geared up for it this summer,” Ferranti says.

“When you think of things to do outside, it’s golf and having something to eat on the patio,” he says. “We’re ready to go for the season.”

Pictured at top: Jenny Gaffney, manager of Knoll Run, shows items of food and drink on its new patio.