WARREN, Ohio – A once-thriving steel mill in Trumbull County played a significant role in what authorities say was an international fraud conspiracy orchestrated by one of the most powerful oligarchs in Eastern Europe.

On Aug. 4, federal agents raided the Cleveland and Miami offices of Optima Management Group, a collection of companies owned in part by Ihor Kolomoisky, a billionaire businessman in Ukraine who holds real estate and business interests across the United States – among them Warren Steel Holdings LLC in Champion Township.

According to a complaint filed Aug. 6 in U.S. District Court for the Southern District of Miami, the federal government alleges that Kolomoisky and three associates masterminded a complex plot to launder millions of dollars it says were pilfered from PrivatBank, a Ukraine institution that Kolomoisky once controlled.  That money – issued through lines of credit intended for legitimate business purposes – “functioned instead as slush funds” that Kolomoisky and business partner Gennadiy Bogolyubov used for “whatever purpose they wanted,” court documents say.

Federal prosecutors charge that funds were misappropriated from PrivatBank and then laundered through a labyrinth of shell companies overseas before being sent to the United States.

Some of this money was used to acquire assets in this country, including real estate in Cleveland, Texas and Kentucky and businesses such as Warren Steel, authorities say. These assets in turn served as base collateral to secure additional loans for the Ukrainian businessmen, prosecutors say.

In the end, Warren Steel was gutted and shut its doors in 2016, taking with it more than 150 jobs and leaving Trumbull County with a tangled mess of environmental problems and delinquent taxes. Today, an empty rusting carcass stands near the entrance gate of the sprawling complex, its smokestacks idle as weeds choke much of the property.

Vicki Anderson, spokeswoman for the FBI’s Cleveland office, says agents conducted searches at Optima’s Miami and Cleveland offices, but did not execute searches in Warren. The complaints filed in Miami relate to forfeiture actions against Optima properties in Dallas and Louisville, Ky., because of the alleged conspiracy.

Anderson declined to comment further because this is an ongoing investigation.

Kolomoisky is among the most politically influential figures in Ukraine. He is believed to be the driving force behind the election of Ukraine President Volodymyr Zelensky and owns a conglomerate of media, real estate and energy interests there. Zelensky once starred in a comedy show broadcast on a Kolomoisky-owned television channel.

The oligarch drew national attention last year when it was reported that Kolomoisky briefly met with two Ukrainian nationals engaged in a back-channel effort to uncover dirt on Joe Biden – now the Democratic nominee for president of the United States. Kolomoisky abruptly ended the conversation after he refused the pair’s request to set up a meeting between Zelensky and President Donald Trump confidant Rudy Giuliani.

Kolomoisky was also responsible for raising an army of Ukrainian fighters to stand against Russian influence in that country and is an avowed political enemy of Russian President Vladimir Putin.

During the 1990s, Kolomoisky and Bogolyubov established PrivatBank, one of the largest private lenders in Ukraine. In 2016, authorities discovered a $5.5 billion shortfall and regulators moved to nationalize the bank, effectively seizing it from Kolomoisky’s control.

Kolomoisky has since challenged the state takeover of the bank.

In May 2019, PrivatBank filed a civil action in the Court of Chancery in Delaware that alleges Kolomoisky, Bogolyubov and three associates operating in the United States – Mordechai Korf, Uriel Laber and Chaim Schochet – treated the institution as “their own personal piggy bank” fleecing billions of dollars from average depositors.

According to court documents, Kolomoisky and his associates laundered $622.8 million worth of fraudulently obtained loans into their U.S.-based interests, including at least $9 million directly to Warren Steel Holdings, between 2010 and 2013. At one point, Kolomoisky’s companies had emerged as the single-largest commercial landlords in downtown Cleveland.

Other loans to Warren Steel were directed through the partners’ other interests, according to the U.S. government’s complaint filed in August. Court papers say on one occasion, Korf directed that Optima Acquisitions lend $19 million to Warren Steel. When that loan came due, Korf, with the approval of Kolomoisky and Bogolyubov, procured new loans from a related entity to cover the Optima debt, federal authorities allege. A second example points out that another loan to Warren Steel from Optima Ventures was covered by a loan derived from a Kolomoisky business, Felman Trading Inc., the government says.

These transactions allowed “Kolomoisky, Bogolyubov, Korf and Laber to launder the money, to promote the continued misappropriation of funds from PrivatBank, and to disguise the ownership, nature, and source of funds,” the government says.

Calls to the attorneys known to represent Kolomoisky and PrivatBank were not returned.

Warren Steel Holdings was formed in 2001 to purchase a portion of CSC Ltd., formerly the Copperweld Steel Co., which was liquidating its assets through U.S. Bankruptcy Court.  Just two years earlier, CSC had invested about $100 million in a new continuous caster and melt shop. But a downturn in the steel bar market saddled the company with deep financial problems.

During its heyday, Copperweld employed more than 2,000 at its works just off Mahoning Avenue in Champion Township.

Ukrainian businessman Vadim Shulman formed Warren Steel Holdings through a partnership with Kolomoisky and Bogolyubov under a company called Halliwel Assets, a shell firm based in the Virgin Islands, according to a lawsuit Shulman filed in Trumbull County Common Pleas Court in 2015. Shulman alleges that his partners swindled him out of nearly $30 million that he initially put up to acquire the mill.

In his complaint, Shulman says that by 2012 he became suspicious over the activities of his business partners and instructed his attorneys to investigate.  Court papers show that Shulman later became aware of at least $18 million in loans passed on to Warren Steel from other Kolomoisky-controlled entities. Korf, who was based in Miami and then president of Warren Steel, executed documents on behalf of both the lenders and the company, according to the complaint.

In October 2013, the Champion plant began to institute reduced hours for its employees, which by that time had shrunk to 130 from 200 when the plant became fully operational in 2009.

By 2014, the company had idled the mill completely, and then petitioned the Public Utilities Commission of Ohio for reduced electricity rates so it could restart operations there. At the time, Warren Steel warned that the mill would shut down permanently if the new rates were not approved.  In return for the reduced rates, the company pledged to bring employment to a full-time equivalent of 374 workers.

U.S. Sen. Sherrod Brown, D-Ohio, and U.S. Rep. Tim Ryan, D-13, came to bat for the steelmaker, urging the PUCO to consider the lower energy rates. In July 2014, the PUCO approved the reduction, allowing the steelmaker to restart operations in August of that year.

But the renaissance was short-lived. In November 2015, the company announced it would temporarily shutter its operations by the end of that month. In January 2016, Warren Steel Holdings announced it would close the mill for good, citing “unforeseen business conditions.”

Still, records show that as of 2018, Kolomoisky was still active in pursuing business interests in the United States through lobbyists in Washington and Philadelphia.

In 2017, records show that Kolomoisky paid $100,000 in lobbyist fees to petition for an E-2 visa and “business issues related to investments in the U.S.”  Among the lobbyists was Phil English, former U.S. Rep. from Pennsylvania’s 3rd District, which includes Mercer County.

English said he could not comment on his work with Kolomoisky because it would violate attorney- client privilege.

English’s firm, Arent Fox, based in Washington, received $40,000 in fees during the first quarter of 2017 and another $10,000 related to the E-2 visa during the second quarter.  An E-2 visa allows an individual from certain countries to enter or work in the United States based on the amount of investments held here. Depending on the country of origin, these visas can range between three and five years.

During the second half of 2017, Kolomoisky secured the Philadelphia firm SMW Partners LLC to pursue business issues related to investments here.  Records show the firm received $50,000 over the last two quarters.  Kolomoisky retained the firm through the first quarter of 2018, paying $10,000 during the period.

The wreckage of Warren Steel has left Trumbull County with a site that is today environmentally compromised and saddled with more than $258,354 in delinquent property taxes. In 2016, Ohio Attorney General and now Gov. Mike DeWine filed a complaint in Trumbull County Common Pleas Court for injunctive relief and civil penalties associated with contamination at the location.

Hannah Hundley, spokeswoman for the attorney general’s office, said that the parties are acting in accordance with a consent order signed in November 2019 to begin cleaning the site, but the case is still in active litigation. It is scheduled to go to trial Oct. 26.

Nic Coggins, assistant director for the Trumbull County Planning Commission, says the property remains in private hands and the matter is still before the Ohio Attorney General. An updated 2020 view from Google Maps shows the site pocked with orange liquid in several lagoons along the 380-acre site.

“There are still contaminants there,” Coggins says. “There’s little we could do unless they agree to do it.” 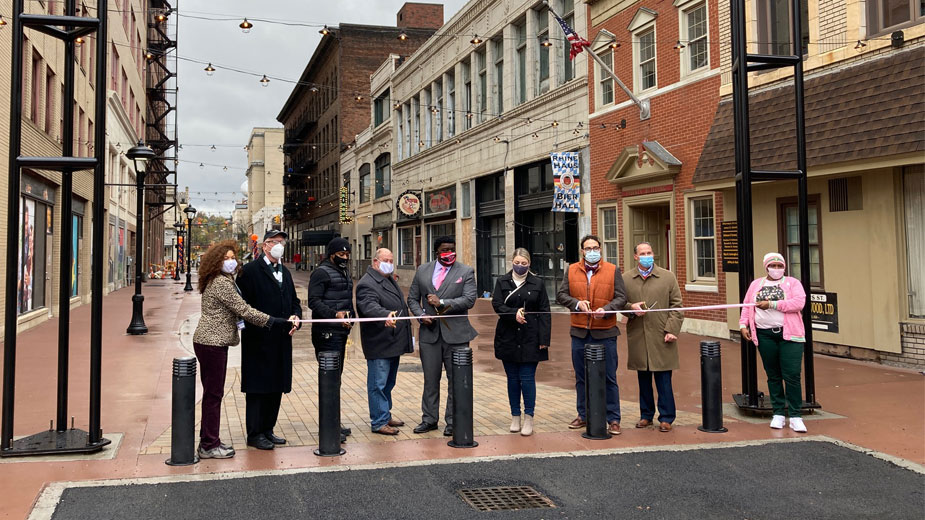 Transformation of Phelps Street into Walkway Is Complete

COITSVILLE, Ohio – Aqua Ohio, the Mahoning County Board of Commissioners and Coitsville Township trustees today announced their collaboration to […]

NILES, Ohio – The Mahoning Valley’s newest events center is a flexible and state-of-the-art facility that can accommodate everything from […]