CANFIELD, Ohio – With the inaugural class of the Mahoning Country Agricultural Hall of Fame now in the books, attention will turn to creating a permanent site.

The Mahoning County Agricultural Society inducted eight men and one husband-wife couple into the hall Wednesday morning in a ceremony at the Canfield Fair.

The society runs the fair, which opened Wednesday and is now in its 176th year.

Despite the society’s long history and the county’s legacy of farming, there has never been a Mahoning ag hall of fame until now.

George Houk, director of the hall of fame, acknowledged the oversight and vowed to grow the institution.

“A bit of wisdom my dad instilled in me years ago is, ‘the best time to plant a tree is 20 years ago. The next best time is today,’” Houk said.

“I can’t explain it, and we’re not going to dwell on why this important recognition program wasn’t started years ago… But we now have a Mahoning County Agricultural Hall of Fame.”

Many rural counties in Ohio have long had agricultural halls of fame. Mahoning’s was announced earlier this year.

Houk called to the podium the children and descendants for seven of the inductees and presented them with a plaque.

Only one inductee is still alive: William B. Phillips of Canfield, 98. Phillips was unable to attend the ceremony, so his wife, Susan, accepted his award.

Every inductee was a prominent member of the farming community, either as a business owner, Extension agent or a farmer.

Susan Phillips said the creation of the hall of fame was way overdue.

“We’ve had so many great farmers and agriculture has been so important over the years,” she said. “I hope people continue to send in [nominations].”

Susan is also a longtime member of the agricultural community and remains very active.

“I have no title [at the fair], but I just enjoy helping out,” she said. “They call me an ambassador of agriculture. I have a lot of roots. My father, grandfather and brother have all been directors of the fair. I was raised at the fair.”

Her husband, William, began a 32-year career as an Ohio State University Extension agent for Mahoning County in 1956.

Susan said she is glad her husband was able to see the creation of the hall of fame and his own induction. “So many of Bill’s friends were also inducted,” she said. “They are looking down on us now.”

Bob Jarvis, president of the Canfield Fair board, said there has already been a lot of discussion as to where on the fairgrounds a permanent location will be installed to house the hall of fame and display the plaques of its members.

“We will be adding on to the events center, and one idea is to put [the hall of fame] in the main foyer of the building,” Jarvis said. “We’re also talking about putting in a museum.”

Wherever it goes, the primary goal of the board is to make it a special place.

“We feel these men and women are among the most special this community has,” he said.

Jarvis called for the agricultural community and the general public to continue to nominate people for the hall each year.

“There are so many people out there who deserve this honor,” he said.

A nomination form will be available at Canfieldfair.com. Deadline for nominations will be the first Friday of June of every year, with the induction ceremony taking place at that year’s fair.

Here are biographies of each inductee, as compiled by the fair board:

Darrel A. Bacon: A successful grain and dairy farmer, he was also the co-founder of Green Meadows Soil Service in New Springfield. Bacon was the head advisor for the Springfield Booster Boys 4-H club for 62 years, and a founding member of the market livestock club in Mahoning County. He served on numerous Farm Bureau committees and served 22 years on the Canfield Fair Board.

Vernon E. Crouse: Born in 1894, Crouse grew up on his family’s Beaver Township farm. He was a member of the Canfield Fair board for 28 years and is credited with many ideas that have preserved the agricultural heritage of the fair.

J. Paul Good: Born in Beaver Township in 1930, he grew up on the family farm located on U.S. 224 at South Avenue. After college, Good joined his father running Good Farm Equipment in Canfield. In 1963, Good started his career as the executive director for the Agricultural Stabilization and Conservation Service in Mahoning County. Later his position was enlarged to add Columbiana County to his office. He also produced “The Good Report,” a daily radio show about the farm scene.

Elden R. Groves: Born 1909 in Green Township, Groves was a dairy farmer . By 1934, Grove’s talents in agricultural journalism were showcased in the Farm & Dairy newspaper in a column titled “Seems to Me.” He was later named editor of the newspaper, holding the position until 1982. He was also the farm reporter for WFMJ for 25 years and wrote a column for Ohio Farmer magazine for over 40 years.

David and Joanna Witmer: The Witmers Witmer’s Feed & Grain in 1978. They grew their grain handling business, which today handles well over 2 million bushels of grain per year and manufactures over 100,000 tons of feed.

Paul D. Witmer: Born in Columbiana in 1906, Witmer started farming and selling farm equipment in the 1920s. In 1929, Witmer and his father, I.B. Witmer, purchased a farm on Green Beaver Road in Green Township. It was on this farm that Witmer began a dairy operation as well as the John Deere dealership that would become one of the largest in the state.

Pictured at top: Those who accepted plaques for the inaugural members of the Mahoning County Agricultural Hall of Fame pose for a photo. All but one of the inductees is deceased. 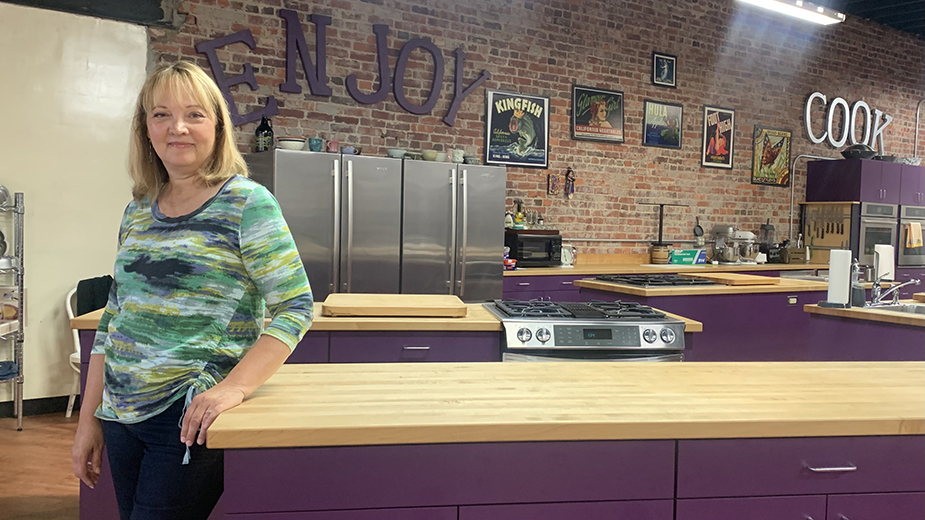 SHARON, Pa. – Pat Evans felt inspired by some of the cooking classes she took when she was living in Pittsburgh. After moving back to her hometown of Sharon, she decided to shift from her career in health care and…