AKRON, Ohio — Passengers flying out of Akron-Canton Airport (CAK) to Houston this morning were treated to something unexpected at the gate – a piece of cake and a cup of coffee.

It was to celebrate the inaugural flight out of Akron-Canton to George Bush Intercontinental Airport in Houston by way of United Airlines Inc. The refreshments and ribbon-cutting took some of the travelers off guard, said the airport’s president and CEO, Rick McQueen.

“A couple people didn’t realize it was the first flight,” McQueen said. “So they got cake and free coffee. It was a nice way to kick off a nice, new service.”

Forty-eight passengers boarded the 50-seat aircraft set to depart at 6:54 a.m. Eastern Standard Time and arrive in Houston at 8:55 a.m. Central Standard Time. Return flights leave Houston at 6:45 p.m. CST and arrive at Akron-Canton at 10:36 p.m. EST, McQueen said. As is tradition for a new flight, the aircraft passed under a water cannon salute as it taxied toward the runway.

“We had a pretty full airplane,” he said. “All the passengers were waving at us as they went past.” 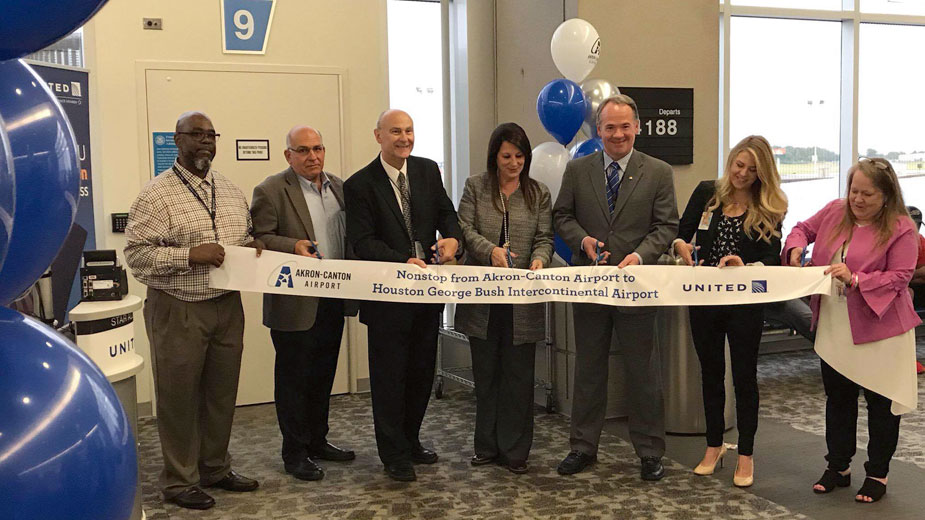 McQueen expects this service to do well amongst business travelers, particularly those in the oil and gas industry, he said. For executives of Texas-based oil and gas companies as well as local businesses like Goodyear, the nonstop flight “is a nice connection for those folks to get back and forth,” he said.

“You can go down there, get in a full day of business and come back and sleep in your bed at night,” he said.

The service is Akron-Canton’s first to Houston, and United’s eighth daily flight out of the airport. It adds to the carrier’s five daily flights to Chicago and two to Newark. United will offer one flight to Houston to start, but indicated that it may add a second daily flight if the business is there, McQueen said. 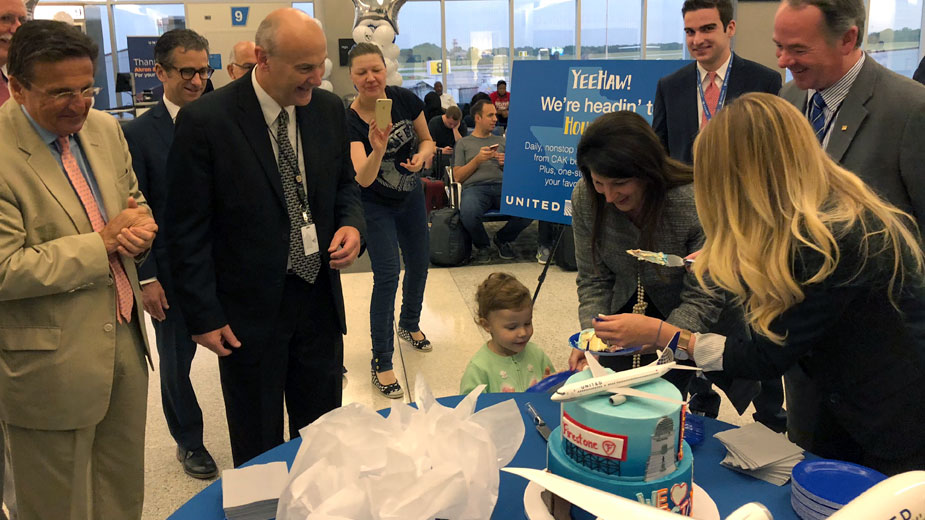 Pictured: Passengers were treated to cake at the gate.

Along with direct service to Houston, business and leisure travelers now have another option to connect to national and international destinations, said a United spokesman, Jonathan Guerin. Passengers can connect to more than 100 destinations including the West Coast, Southeast and Latin America, he said.

United continuously monitors demand in all of its markets, he said. In the 70 years that the carrier has offered service out of Akron-Canton, it has seen increased demand for daily travel between northeastern Ohio and Houston, he said. Much of the demand is among business travelers flying to Houston as a final destination or connecting to flights to other business centers.

“This service will greatly complement our existing flights from the Cleveland and Akron-Canton area by offering customers nonstop options to Houston and easy connections to points beyond,” he said. “Additionally, this nonstop service will save customers nearly two hours of the current travel time to Houston.”

When the airport first opened in 1946, United and American were two of the first carriers to move in two years later – the others being Eastern Air Lines and Capital Airlines, the latter of which merged with United in 1961. While American has offered service at Akron-Canton off and on, he said United is the only carrier that has provided continuous service.

“It’s a point of pride for our community that we can support them all those years and keep them here,” he said. “Everybody knows what they can expect with an airline like United. The longevity that United has had here speaks volumes for our community and support for it.”