YOUNGSTOWN, Ohio – When visitors walk through the gates of the Youngstown Foundation Amphitheatre for the first time June 14, they’ll take the first steps into a new phase of downtown revitalization.

The riverfront venue, a companion to the Covelli Centre that opened in 2005 and recast downtown as the setting for an entertainment district, will attract even more people from throughout the region to the city.

“It’s going to be another shot in the arm for the economy, for people to buy, to eat and to have a great time,” says Mayor Jamael Tito Brown. “It’s another step forward for Youngstown and a great opportunity to shine as an example of a private-public partnership. That’s one of the key elements to this project. We have private investment as well as public investment.”

And that investment by the private sector will only continue to grow as more business sponsors sign on, and the operators of bars and restaurants prepare for the jump in business.

To attract more patrons and keep them downtown longer after viewing a concert or show, Rinehart is adding more entertainment at his restaurants, including axe-throwing at Rhine Haus.

“It’s a rising tide,” he says. “We built Rhine Haus toward the age group they’re specifically going after with the concerts.”

Mark Canzonetta, owner of Bistro 1907 on the ground floor of DoubleTree by Hilton Downtown, plans to operate a taco truck at the amphitheater for certain events – and serve even more guests at his restaurant.

“It will be a gem for the Valley and all of the businesses around it,” Canzonetta says of the outdoor venue. “We are all going to see a positive business surge on event nights. It’s going to be a big plus.”

Canzonetta says his Bistro 1907 is “doing well and many big things are coming to the city that the amphitheater is going to kick into play. It’s going to attract more businesses. People are becoming more and more confident.”

Kimberly Patrone, director of sales at the DoubleTree, believes concerts at the amphitheater will draw visitors from the Pittsburgh and Cleveland areas, and many will stay overnight.

“The tourists will be coming here and using other restaurants, businesses or banks, grocery stores, gas stations – even the little places throughout,” she says. “It puts our name on the map. We’re a small town, yet we’ll make a big impact.”

Already, the hotel is booking reservations related to amphitheatre events, Patrone says. Bookings tend to surge in the week leading up to an event, she adds, and likely will fluctuate with the weather.

Just down the street, The Federal manager Sophia Martini says she and her staff hope the amphitheater will bring as much traffic to the downtown bars and restaurants as the Covelli Centre does.

“People are going to be able to get outside and enjoy themselves,” Martini says. “The growth of Youngstown has been tremendous over the years.”

Adds Charles Shasho, the city’s director of public works, “The amphitheater’s impact downtown is just another step in our renaissance. Our potential is unlimited.”

“It is another opportunity for us to bring world-class entertainment to the area and have it right in people’s backyards,” says Ken Bigley, vice president of JAC Management Group, which operates the amphitheater and Covelli Centre.

Events during the opening weekend include a “First Look” June 14 sponsored by Home Savings Bank, a free community event with entertainment by The Sensations, Geo C and Tha Storm and more, and entertainment by Michael Stanley and The Resonators and Donnie Iris and The Cruisers on June 15. Other acts this summer include Gucci Mane on June 22, Chicago on June 28 and Earth, Wind & Fire on July 5.

The concerts will bring people together from inside and outside the city, which is just as significant as bringing more business downtown, according to Derrick McDowell, city community engagement and inclusion coordinator.

“One of the greatest things that we have in this community is access,” McDowell observes. “Having a complex and facility like this that’s state-of-the-art enhances the access that we can give to the community.”

Planning for the project began in February 2015 when then-Mayor John McNally said the city would explore the creation of the amphitheater.

With the most recent additions and reductions, final cost of the project is around $7.9 million. Separately, an 84-inch sewer line that ran though the amphitheater and park property was relocated and then replaced, an $8 million-plus project.

Funding for the amphitheater includes a $4 million Section 108 loan to be repaid from a share of the city’s annual Community Development Block Grant disbursement and a $3 million donation from the Youngstown Foundation that secured naming rights for the building – its signature gift in celebration of its centennial in 2018.

“Out of all the projects we reviewed and evaluated, we felt this one would have the greatest impact for the entire community,” says Jan Strasfeld, executive director of the Youngstown Foundation. “It will drive economic development as well as quality of life. And it will be leveraged to increase the downtown economy.”

By the opening of the amphitheater June 14, work on the adjacent riverfront park should be mostly complete except for final “greening of the site,” says the city’s Shasho. “If they hydro-seed it, I think they’ll be mowing grass in a month,” he says. 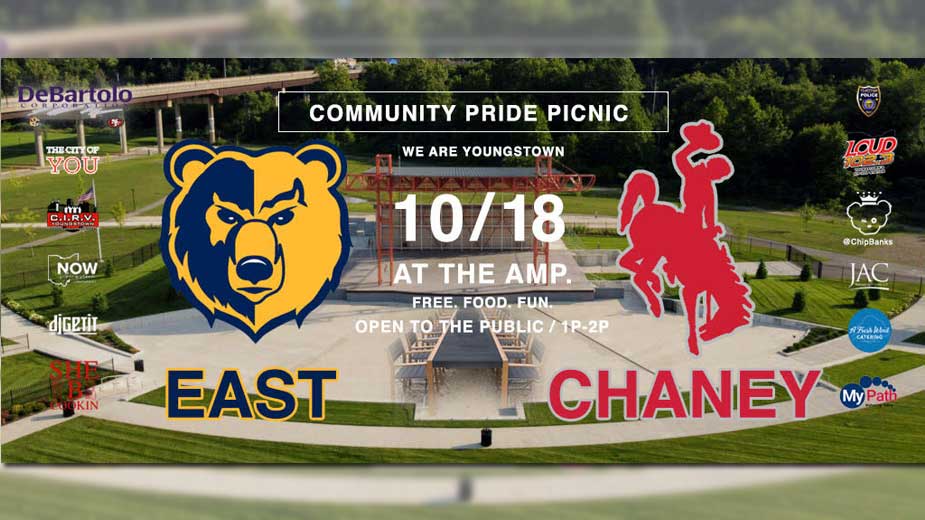 YOUNGSTOWN, Ohio — Youngstown State University’s Gary Sexton, director of WYSU-FM 88.5, is taking a 65-mile run later this month as a part of the radio station’s Support WYSU Month. Sexton, a ultra-marathoner from way back, will run 65 miles…

by Sasse Sisters Society - 1 week ago