BOARDMAN, Ohio – As a freshman in high school during the early 1940s, the founder of the George Mitchell Co., Boardman, would hop on his bike after classes let out in the morning, pedal to the next bus stop and ride from Salem to his part-time job at Crescent Machine Co. in Leetonia. “I was 14 when I started,” George Mitchell recalls, while also attending adult education courses in the evening. “I didn’t have time to get a complete college education.”

It was the first chapter in a career that spans eight decades in manufacturing and one that would take the engineer all over the globe. “I’ve traveled pretty much around the world,” he says.

At 91, Mitchell shows few signs of slowing down. In January, he stepped down as president of the company, making way for a new generation of leadership under President Paul Russo.

Still, Mitchell shows up for work every day, just as he has done since 1963 when he founded the company. On a morning in early February, Mitchell walks the shop floor as workers fabricate machines used in the pipe and tube industry.

From the start, Mitchell knew that he had a knack for making things. Considered too young to serve in the armed forces during World War II, Mitchell found himself teaching engineering to veterans recently returned from the conflict. “They were at least 10 years – maybe 20 years – older than me,” he says.

In 1950, Mitchell joined Lombard Corp. in Youngstown, which manufactured extrusion presses for the pipe and tube industry.

“It was a major manufacturer of aluminum extrusion presses, and that’s where I started getting a taste for tubing,” he says. Yet he was an anomaly within the profession. Just about everyone he worked with had obtained a professional engineering, or P.E., license. At the time, a college degree was not a prerequisite to sit for the exam. 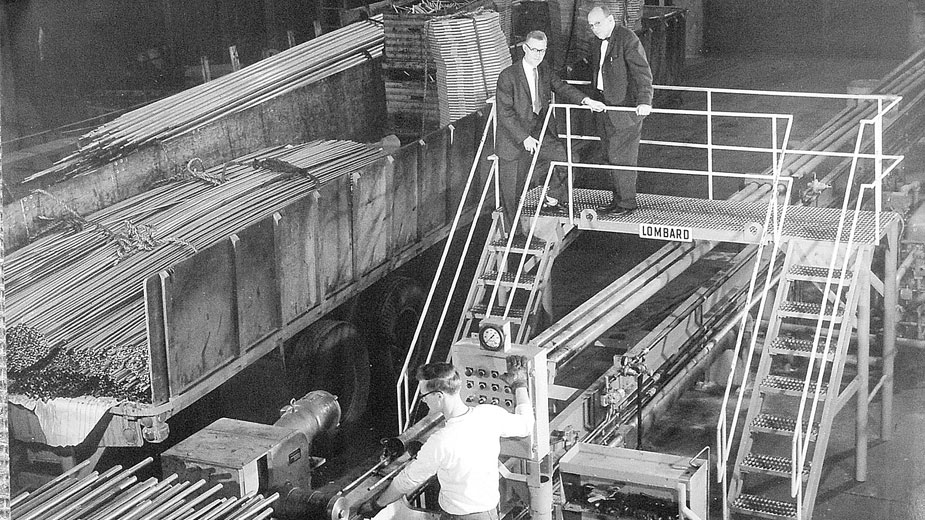 Pictured: Mitchell is pictured top left with Byron Halstead, who would later help finance his venture. Here, the two inspect equipment manufactured at the Lombard Corp., where Mitchell worked during the 1950s and 1960s.

The test called for completing it in two parts, Mitchell recalls. The first part was a two-day process, followed by another two days administered four years later.

“I convinced them to let me take all four days in succession at one time,” he says as he laughs. “I ended up in the top 10% in the state. I’m probably one of the few people left who works as an engineer but doesn’t have an engineering degree,” he says.

While Mitchell lacked an engineering degree, the license did open doors. At Lombard, he moved into sales and traveled the world, connecting with customers in more than 30 countries.

In 1963, Mitchell decided to start his own firm, the George A. Mitchell Co., and put his self-made education to work. From the outset, Mitchell saw the need to improve the machines used to form and cold-draw metal tubes. Conventional manufacturing processes at the time were both expensive and slow. Mitchell, however, improved “push-pointing” technology and designed machines that hold the tube in place while drawing dies are forced over the end of the part, reducing its diameter.

As a result, Mitchell machines are used to manufacture pipe and tube components for just about any business – from automotive parts to aluminum baseball bats, even superconductors used in the medical industry. All of this equipment is manufactured at the company shop on McClurg Road in Boardman, which opened in 1968.

Since then, the company has built seven additions to accommodate its workload, he says.

“Automotive should constitute a large chunk of our business this year,” says Russo, the new president. “It’s looking to be a pretty strong year.”

One of the more interesting projects this year is building two machines for a company that uses a complex manufacturing process that forms specialized products from “memory metal.”

Memory metal is material that can be bent or stretched, but then returns to its original form or shape when it comes in contact with warm liquids. The material is used mainly for medical devices, such as stents that are placed in a patient’s arteries to improve blood flow. 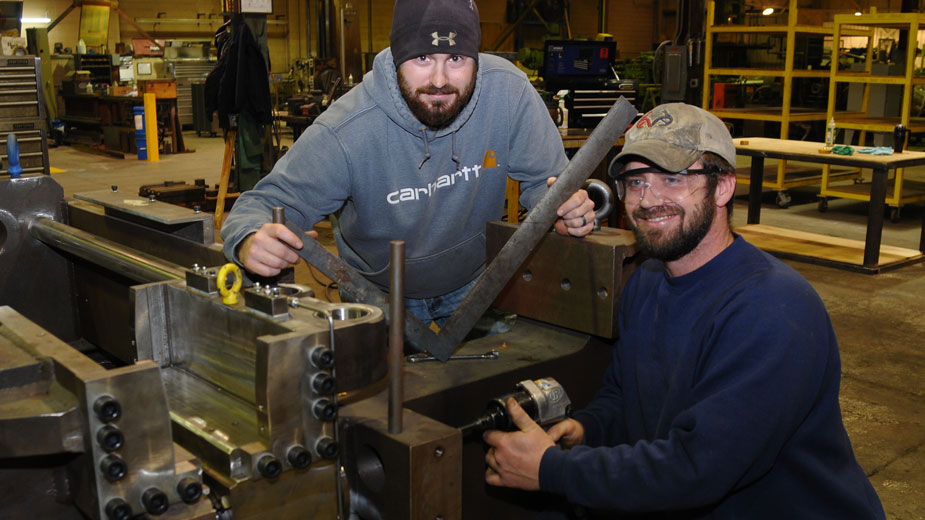 Pictured: Machinists Aaron Colvin and Chris Walters work on a piece of equipment used in the tube industry.

George Mitchell Co. sells its equipment in 33 countries, Russo says. “The one industrialized country that hasn’t purchased one of our machines is Germany,” he says. Since 1963, the company has built more than 700 machines.

Russo has been with the company 35 years and has helped the company adapt and expand. “We did a lot of machines for Vallourec and the oil and gas industry,” he says.

Four of the company machines are at the Youngstown campus of Vallourec, five are at its plants in Brazil, three are in Houston, three others are in France and a single machine is operating at a Vallourec plant in Mexico.

“We were probably one of the smallest vendors they used,” he says.

Although small – the company employs 15 – it does business with some of the best-known names in the metals industry, Mitchell says. “We deal with all of the major manufacturers of metal tubing,” he says.

All of the engineering design and fabrication is done at the Boardman location. Additional machining work is performed with an associated but separate company in Tennessee, Mitchell says.

After 77 years in manufacturing, Mitchell now says it’s time to scale back slightly. 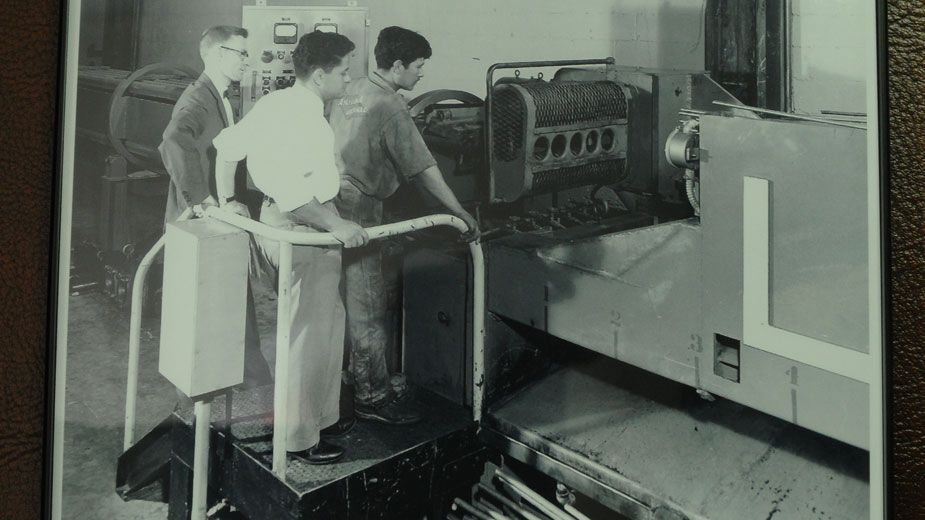 But “I should’ve given up a while ago. I’m trying to catch up on a lot,” he says. He’s planning a scenic trip by train through the Canadian Rockies this year and just nine years ago was still an avid skier at age 82.

“I do come to work every day, but I think my wife has better ideas,” Mitchell says with a smile.