YOUNGSTOWN, Ohio – After a local businesswoman was attacked in Mill Creek Park, she’s turned the negative incident into a positive motive to share her story and bring awareness to the measures that can be taken to prevent a similar incident.

The 51-year old woman, who doesn’t want her name printed due to safety concerns, has been going to Mill Creek Park for 30 years, whether to run, walk, bike or kayak.

Around 8 p.m. April 26, she was walking on the road between the first parking lot off Sheban Drive and the Wetlands parking lot. She recalls passing multiple park-goers and people in their cars who drove past her.

As she listened to an e-book through headphones, a man attacked her from behind, she says. She was dragged into the woods and beaten by the man, receiving injuries to her head, neck and wrist. Some of her teeth were knocked out as well.

“I won’t be the same, but I won’t stop living,” she says. “I love the park and I want people to enjoy the park.”

She’s returned to the area since the frightening attack, but with some precautions.

She always tries to bring a friend with her, she wears a whistle around her neck, and she carries a handheld self-defense device, such as pepper spray or a TigerLady self-defense claw, which is modeled after a cat’s retractable claws.

Among other precautions, she says, is making eye contact with people, standing straight, keeping aware of your surroundings, knowing where your exits are, having someone walk you to your car if its dark out, and if attacked, be able to “stun” or “startle” the attacker by blowing a whistle, having a self-defense device to use, or poke them in the eyes.

After staff and members at Creekside Fitness & Health Center in Boardman heard of the attack, they decided to host two self-defense seminars and they’re looking to hold more in the future.

“You never think it will happen to you or someone you know and when it does, it shakes you up,” says Courtney Angelo, assistant manager at Creekside. “We are a close-knit community and wanted to not only help raise awareness but also educate women on what to do in these types of situations.”

The businesswoman who was attacked attended the seminars held May 23 and 24 to recount the story of her attack. “I spoke with them and shared what happened to me so they‘ll be more conscious,” she says.

Gay is retired from the Mahoning County Sheriff’s Office and is a fifth-degree black belt who has been studying martial arts for 50 years. For the past 20 years he’s also been teaching self-defense to various organizations.

“Unfortunately with the world you live in today you need to know self-defense,” Gay says. “It’s something that’s needed more and more in society.”

Gay started holding self-defense classes after one of the woman at his church was assaulted. The pastor came up to him and asked if he would teach a class. “If I could help one person then its worth it,” Gay recalls thinking when he started the class.

For the two seminars at Creekside, 100 women signed up, he says. The first half of the class is lecture-based on awareness and common-sense tips.

“[Things like] not to go shopping at 10 p.m. at night because you need something at the mall and always have a buddy,” he says. “Then we get into weapons. The women want to carry mace or a knife or a gun. I tell them, ‘That’s fine if you’re trained in it, but if you carry a weapon it can always be taken off of you and used against you.’ ”

The other half of the class is spent doing hands-on training.

“They love when I bring the kicking bags out and I have them kick and punch,” he says. “You have to train and practice.”

However, the most important thing a person can do for defense is paying attention to their surroundings.

“You want to be a hard target and the biggest thing is paying attention,” says Scott Weamer, Canfield assistant police chief. “Criminals look for the person that is timid or has their head down because that is a signal you’re an easy target or a victim.”

Weamer has 15 years in the police force and has trained at Creekside Karate Club with Gay in the past. He helped Gay teach the self-defense seminars in May. When training a new police officer, he says that one of the most challenging skills to develop is being aware of your surroundings.

“We want to perceive a threat as soon as possible to avoid it,” he says. “Put the phone down and start paying attention to what’s going on around you.”

If someone is serious about learning how to defend themselves, a martial arts school is a good place to start. “You can take a three-hour class and do nothing but hands-on techniques and you won’t remember anything when you need to,” Weamer says. “To be a martial artist, it takes years.”

“I teach that muscle has memory,” Young says. “Every time you drive and you see a red light you stop. I condition their mind a different way with physical altercations.”

Young is the owner of Efficacy Training Systems and he is a licensed massage therapist, a personal trainer and he provides self-defense training.

“My sister was raped at gunpoint. That’s why I do this,” he says. “I couldn’t be there for her so every woman that comes to me, that’s the type of intensity that I’m putting into their training.”

Young works with both men and women who want to learn self-defense training. Some have had attempted rapes or assaults, he says, and others are teenagers sent to him by their parents who are concerned about their kids going off to college and being on their own for the first time. 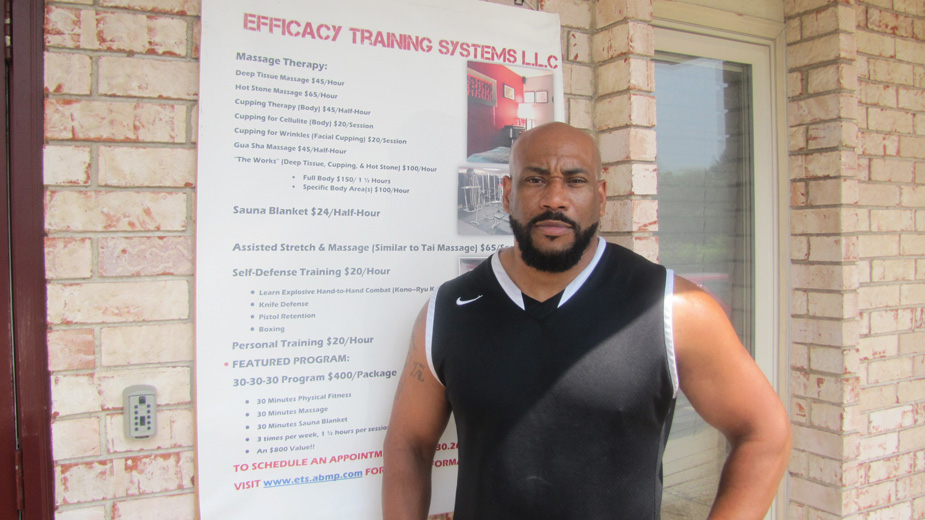 One of his clients, Nichole Taylor, says she’s been in several abusive relationships, but training with Young since October has helped her with her confidence with the added benefit of knowing how to defend herself.

Young creates a foundation of self-defense techniques based on a combination of methods he’s learned from shorin ryu, aikido, jujitsu, western boxing and Chinese martial arts.

“Every time my students walk away from here, I make sure that they have some sort of technique that they can work,” he says. “When they come back we refresh that and then we build on that.”

Once Young thinks his client has a good technique, he creates a hostile environment to “stress test” what they learned.

“I create the scenario for my students to use the technique and I drill my students on it over and over again,” he says. “If you’re technique isn’t right, that might be death.”

Among the scenarios he simulates are somebody punching them or grabbing them and how to break that hold, how to strike and create a gap, and how to recognize a threat.

“I don’t teach women to punch somebody in the face because they can’t generate enough force sometimes to knock the person out if they don’t hit them correctly,” he says. “My random martial arts [training] teaches the only places you attack are the throat, soft tissue and the collarbone.”

Young also offers training to business owners, showing staff how they can set up a defensive position if they’re attacked and how to fight their way out of it.

“People spend hundreds of dollars a year on car insurance but never get into an accident. So why are you doing that? You’re doing that in case something does go wrong,” Young says. “It’s important people learn to protect themselves because sometimes there’s no one coming to save them.”