Like many professionals, he begins his day with a workout at the Central Branch of the YMCA. But before heading to his law office in Canfield, he stops at the Smarts Community Art School downtown to work an hour or so on a nine-foot-long canvas, on which he is painting an iconic Canfield scene – the annual Fourth of July Parade at the Green.

Johnson, partner and owner of Johnson & Johnson Law Firm, is a prolific painter who enters art shows in New England and New York, and is represented by several galleries there, he says.

He has been drawing since his youth and began painting in his 40s. Last year the attorney became artist in residence at Smarts. He started work on the mural in May. 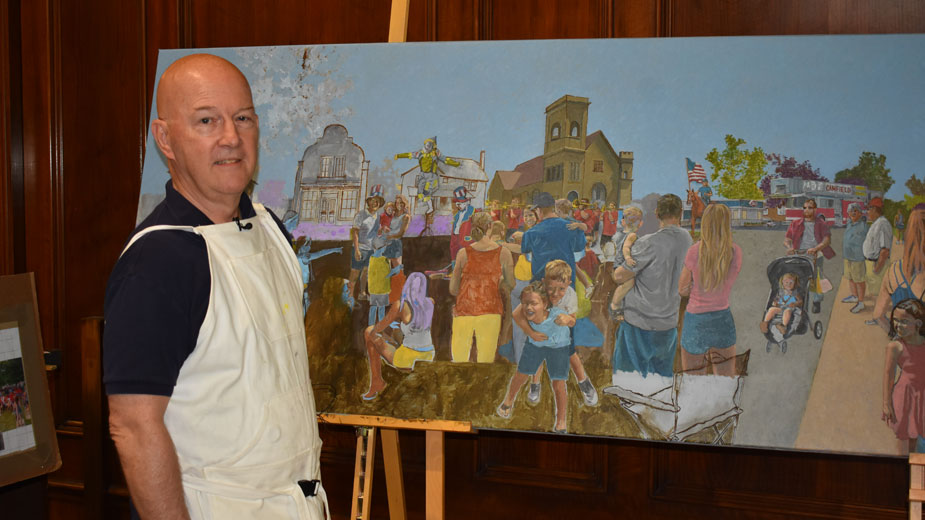 The subjects in Johnson’s painting are from photographs taken by his daughter, Molly.

About three years ago, his daughter began taking photographs during the parade for the painting, which will show a panoramic view of the parade and green. Johnson began work on the painting itself in May, sketching out the streetscape and buildings in pencil from the photo reference.

On a separate easel from the canvas is an enlargement of the panoramic view of the streetscape Johnson shot on his cell phone. His daughter arranged the figures cut from her photos on the streetscape photo to reflect their intended locations on the painting.

Johnson begins by painting what he calls a “color negative” on the canvas, a technique that takes advantage of how the eye works. Staring at a red object for about 20 seconds and then shifting gaze to a white wall produces a bluish “ghost image,” he says.

Using this technique, Caucasian figures are painted in blue, for example, and blonde hair starts out as purple.

“By over-painting that but not completely covering up the under painting, your eye blends them in a really interesting way,” he says. “It puts people or whatever object you’re painting in space in a way that I believe is unique.

“It means that you’ve got to paint the thing twice, but it’s worth it,” he adds.

For the mural, Johnson is taking a different approach in terms of what the painting depicts.

Normally, the focus would be on the happenings of the parade itself from the view of the pedestrians observing the spectacle. “I was more interested in the interactions of the people watching the parade,” he says.

Among the characters being depicted in the painting are two women engaged in conversation, with a young child tugging on the arm of her mother, two boys engaged in horseplay and a father pushing a stroller toward the foreground.

“One of the challenges in doing a crowd scene is that you’re looking at the backs of people, which would be boring,” Johnson says “It was important that I wasn’t just showing the backs of everybody but that I have people facing this way so they’re facing the viewer.”

To help balance the images in the painting, which has “no verticality,” Johnson says, he included a clown mounted on a unicycle and a girl riding a horse holding a flag.

Another challenge he faced was dealing with the shadow patterns for the different figures – the first year his daughter took photographs, for example, was overcast, while the sun was out for the following two.

“This is a panorama, so this is a distorted view,” he says. “That makes for a lot of problems for the artist.”

A shadow of someone standing on the right side of the painting is going to cast a shadow to the right, while someone on the left will cast one in that direction, while someone in the middle will cast one toward the viewer. Johnson uses common objects like bottles of creamer to find the correct angle for the light.

“That gives you a headache, but that’s what you’ve got to do,” he says.

Figures in the painting include Canfield Councilman Bruce Neff, who Johnson went to high school with; Johnson’s daughter’s best friend and her family; two nieces; and his wife and grandson.

Johnson acknowledges he took some artistic license. He removed trees from the Green to show the bandstand and the old courthouse. In addition, that woman the painting depicts with the daughter was actually holding on to the leash of her dog. “I thought it told a better story,” he says.

Becky Keck, Smarts executive director, calls Johnson “a remarkable kind of renaissance man.” Not only is he a respected attorney and painter, he is a jazz pianist who plays in a trio with his son.

In addition to working on the painting at Smarts, the school’s artist in residence recently taught art classes at Liberty High School. “The kids were so wonderful and enthusiastic and have no inhibition,” he says.

Seeing a “living, working artist” is great for the children who come to Smarts, but it’s also empowering for the adults who come to the school, Keck says.

“Some people say that art is enrichment,” she says. “If you ask Nils, he would say that art making – whether it’s painting or music – is critical to his lifestyle and who he is. That’s really good for adults to see.”

Once the painting is completed, which Johnson anticipates will be in early October, he will donate it to the city of Canfield.

One location being discussed for display is the Public Library of Youngstown & Mahoning County’s “wonderful” Canfield Branch, Johnson says. The branch was rebuilt about three years ago. “More people could see it that way,” he says.