Austintown Forges Ahead with Commercial Development

AUSTINTOWN, Ohio – When discussing economic development across the Mahoning Valley, two areas jump to the forefront: the U.S. Route 224 corridor in Boardman and the area around the Eastwood Mall Complex in Niles.

But as a slew of projects throughout Austintown work their way through various stages of commercial development – some a few years down the road, others a few weeks – those in the township see their community as one of the area’s big players, even beyond the main artery of Mahoning Avenue.

“When you look at places like Boardman and Niles, they’re starting to get landlocked. They don’t have big room for growth,” says Austintown Township Trustee Jim Davis. “You can drive down Route 46 and see all the commercial property for sale.”

Along that road alone, the past year has been a busy one. A new Sheetz gas station opened at the interchange with Interstate 80, while the gas stations at the intersection of Mahoning Avenue at Route 46 – Sheetz and BP – were recently renovated. On Jan. 3, Victoria House Assisted Living was sold for $5.9 million, the area’s largest real estate transaction that month. Later this year, DCMD Holdings will start work on a two-story, 14,000-square-foot medical office at 1440 S. Canfield-Niles Road valued at $2.4 million, according to the township’s zoning inspector, Darren Crivelli.

Elsewhere in Austintown, Woodlands Family Care Centers is nearing completion on its $2.2 million expansion at Austinwoods Nursing Center on Kirk Road. Just off state Route 11, the former McQuaid’s gas station will reopen as a Mobil. It was sold last summer for $210,000.

The project drawing the most attention in the township is the Meijer superstore, which Davis says is still on track. The Michigan-based chain purchased the former Austintown Middle School for $2.6 million in February 2016. The site has been cleared, although construction isn’t expected to begin until 2020 and the store open the year after.

“We know they’re coming. They’ve invested over $3.5 million in the demolition of the school, the acquisition of the property and getting the property ready to be built,” the trustee says. “They also needed to find other locations in the area so that when they’re sending a truck loaded with goods, they’re not just coming to Austintown. They have to make it worth their while to send a truck.”

Elsewhere in the area, Meijer is planning on building stores in Boardman and Niles, sites that were purchased after the Austintown development and are expected to be open before the township’s store.

On Raccoon Road, Barry Dyngles barbecue is advancing on its addition and has plans for a 6,600-square-foot, $1.1 million banquet center, Crivelli says, while the new owners of Sam’s Wedge Inn at the intersection of Raccoon and New roads have renovated and expanded the restaurant.

“We saw an opportunity to renovate a place with a tremendous amount of history. It opened in February of 1967 and was always a staple of the community. We saw a chance to bring back the history of a place that meant a lot to so many people,” says Marc Presley, who owns the Wedge Inn alongside business partner Don Sherwood. “This is more of the neighborhood side of Austintown versus the commercial Mahoning Avenue.”

Presley isn’t alone in that sentiment. As they talk about the developments around them, many business owners point to the community as a reason for their success.

“We’ve been here a long time. That support is cumulative; it doesn’t happen overnight,” says Greg Greenwood, owner of Greenwood Chevrolet. “We got the lucky hand because if you drive up and down the Mahoning Avenue corridor, there aren’t many representations of foreign [automobile] manufacturers. This is a great area for people who want to support domestic brands.”

In 2018, Greenwood Chevrolet was the top Mahoning Valley dealer for combined new- and used-car sales with 3,310 delivered. This year, he recognizes that the loss of the Lordstown-built Chevy Cruze will have an impact on business because of the area’s “disproportionate” support of the model.

“We are eliminating a particular segment of the General Motors lineup – the fuel-efficient, sub-compact car – that we did disproportionately well with in this Valley,” the dealer says. “We did really well with that car. The scramble now is what we do with those customers. How do we keep them in the General Motors fold?” 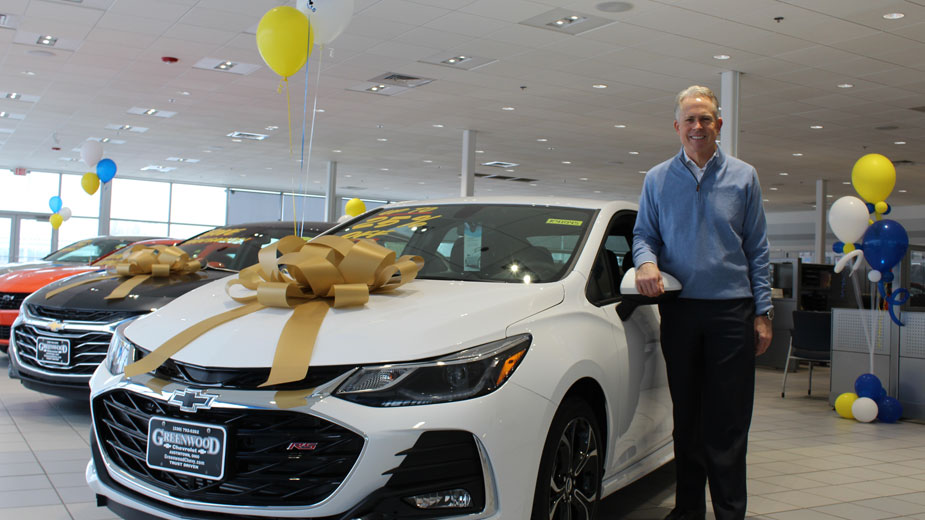 Greg Greenwood, owner of Greenwood Chevrolet, is concerned about how to keep Cruze loyalists in the fold.

In late February, with the final day at General Motors Lordstown Complex fast approaching, it was a thought that was at the forefront of plenty of minds in Austintown.

“I hope and pray that we see more businesses open up and employ 20, 30, 40, 50 people to make up for some of those losses we’ll suffer when GM Lordstown closes. I hope we can keep building and keep people here,” says Mark Cole, owner of the Mark Cole Agency. “I want to see some manufacturing sites. Even if they’re small tool and die shops, that’s what I want to see.”

The insurance group, a representative of American Family Insurance, is this year pushing into the commercial insurance field, Cole says, and hiring two producers as well as “a few new agents.” While the push comes from the national company, it comes during a surge throughout the Mahoning Valley, but especially in Austintown.

“I look at Austintown as a hub of small business. There’s a lot of opportunity here,” Cole says, noting that he’s talked to landlords about bringing in new tenants and how they can invest in their buildings to attract them. “A lot of people from Warren don’t want to go to Boardman and vice versa. But they will come to Austintown. We are filling up. We’re close to doing numbers like the 224 corridor.”

It’s been quite some time since Austintown has seen a flurry of commercial development like this. In 1982, brothers Chris and Don Johnson moved their parents’ bicycle and utility vehicle shop to Fitch Boulevard from Glenwood Avenue in Youngstown, renaming it Austintown Glenwood Cycle to reflect their new site.

Back then, a substantial chunk of business came from providing utility vehicles to industrial and commercial clients. But as those companies closed their doors, that business went away.

“We did a lot of industrial and commercial work, but that market’s died off with everything closing. We did business with Packard Electric, Van Huffel Tube, the Lordstown plant and everybody up in Warren,” he says.

Already with workers transferring from GM Lordstown to other plants out of the state, Austintown Glenwood Cycle has lost between 20 and 30 customers, the brothers estimate.

Today, much of their business falls to bicycles and accessories, spurred on by the activity’s rising popularity in the fitness world and by the nearby Mill Creek MetroParks Bikeway, which has a trailhead just over a mile away on Mahoning Avenue.

“Luckily, the bicycle and fitness industry has gone up,” he says, though “it doesn’t make up for what we used to have.”

While the loss of GM Lordstown will hurt, Davis sees bright spots ahead for the township.

“It’s crazy thinking about General Motors and what it means to this area,” the trustee says. “It’s sad to see them go but on the other side of the same token, it’s nice for people who want to stay here,” as homes in the township sell quickly and developments continue.

The next phase for Austintown, he continues, is to attract retail to the area, either on or off the Mahoning Avenue corridor. With two tenants going out of business – Payless ShoeSource and Pat Catan’s art supply store – in the Austintown Plaza, Davis expects there to be a push to fill those spaces quickly, either by national chains or local businesses.

His focus, though, is on Route 46, where he foresees a big retail draw – Davis points specifically to the idea of an outlet mall – spurring the next big wave of projects in the township.

“Something like that in the Austintown community, with our location right off the interstate, would be a huge success,” he says. “You’re not going to get a Chick-fil-A or an Olive Garden or an Outback Steakhouse if you don’t have that retail development around it to support it. Once we get that piece of the puzzle, that would really spark this community.”

Pictured: Chris and Don Johnson moved Austintown Glenwood Cycle to the township in 1982.