WARREN, Ohio — AutoParkit has selected Siemens PLM as its technology partner that will provide advanced automation hardware as well as electrification and digital tools for the company’s automated parking garage systems.

AutoParkit is a division of Dasher Lawless Automation, whose president and founder is Christopher Alan, a native of Warren. The company owns the former General Electric plant here as well as the former Delphi Packard plant, 402 Dana St., where it plans to house what’s described as the operational expansion for AutoParkit.

In October 2015, Alan announced his plans to transform 500,000 square feet of the former Delphi Packard plant at 402 Dana St. to house his company’s warehouse and assembly operations, possibly bringing 1,000 jobs to his hometown. At the time, he was seeking financial incentives and attempting to acquire the property. Delays followed, centering on the property owner’s bankruptcy.

AutoParkit also operates an office near Los Angeles, where one of its automated parking structures opened last February.

In Marina del Rey, Calif., the company is completing construction of a subterranean parking garage with two levels at INclave, a new live-work-play development. The system will allow residents to park and retrieve automobiles with the additional flexibility to store bicycles, motorcycles, water-sports equipment or even personal storage units. The garage will also feature 19 automated electric vehicle-charging stations.

In announcing its partnership with Siemens, AutoParkit said the technology provides an “integrated portfolio, from power distribution and digital factory to building automation. … [It] achieves a 2-to-1 space savings at approximately the same cost as a conventional approach, as well as cost efficiencies in construction, and a 40% reduction in operational costs.”

The AutoParkit system is the integration of 12 subsystems, orchestrated together to park and retrieve vehicles. The architecture is modular and can be scaled, so each site can be custom-fit with the proper amount of equipment to deliver peak-hour-demand.

Siemens hardware and software is used throughout the system, including switch gear, breakers, disconnects, contactors, relays and power supplies for managing the electrical load. And it is used to move vehicles vertically, horizontally and in some cases, rotationally.

AutoParkit has been working with Siemens since 2016 and Alan recently addressed a Siemens sales conference in Nevada.

“As we continue to chase an estimated $100 billion market, it is important that our systems offer seamless integration,” Alan said. 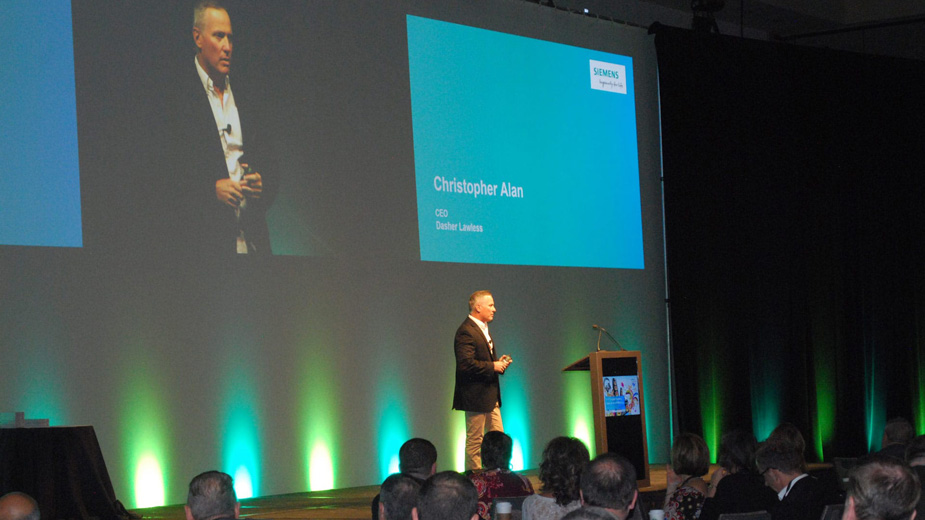 Christopher Alan speaks at a Siemens conference in Nevada.

“The Siemens portfolio is helping us realize the pivotal role advanced automation and software will play in shaping the future of commercial development by addressing the megatrends that challenge our cities, including urbanization, population migration, changing vehicle transportation demands and increasing environmental regulations,” the CEO said.

“We are proud of our partnership with AutoParkit, and this is an excellent example of adapting industrial automation to solve a complex commercial need,” said Raj Batra, president of Siemens Digital Factory Division, U.S., in a prepared statement. “This is a best-practice example of how advanced automation and digitalization will be a disrupter in our society; and AutoParkit is a true innovator in how they challenge the market and existing trends.”

Pictured at top: Interior view of the AutoParkit garage near Los Angeles.