YOUNGSTOWN, Ohio – Who is elected governor of Ohio next week will be a major factor in determining who wins the White House in 2020, former Vice President Joe Biden said Monday at Youngstown State University.

Biden, who served as vice president from 2009 to 2017, spoke in support of Richard Cordray, the Democratic candidate for Ohio governor, capping a series of speakers at the rally that included Cordray and members of the statewide Democratic ticket.

The man voters put into office as governor of Ohio “is going to tell a lot about the country,” the former vice president told approximately 500 people in YSU’s Chestnut Room.

“The next president of the United States is not going to be president without Ohio and Pennsylvania,” he said, adding that governors in 2020 will determine “if we’re going to correct this awful gerrymandering we have.”

Cordray, a former state treasurer and attorney general, served five years as the first director of the federal Consumer Financial Protection Bureau. President Barack Obama “couldn’t figure out why I was so enthusiastic about him,” Biden recalled.

The reason, he said, was that Cordray was “the finest man” he’s ever known. Biden’s late son, Beau, who was Delaware’s attorney general when Cordray was Ohio’s, knew and admired his counterpart. “Beau knew character when he saw it and Rich didn’t let us down,” Biden said.

The “sheriff of Wall Street,” as Cordray was known, returned $12 billion to people who had been cheated by banks, payday lenders and other businesses in the financial services sector, Biden said.

“Rich has character, and boy do we need character,” BIden lamented.

In Beau Biden, Cordray said he saw someone like him who “almost instinctively stood on the side of working people, to give them a voice and see that they’re treated fairly.” He also said he sees many of those same qualities in the elder Biden.

Cordray credited Obama and Biden with steering the country out of the Great Recession but acknowledged Ohio still faces problems. During his campaign travels across the state, he hears from people who tell him they feel left behind and their voices are not being heard and respected in Columbus.

“They don’t see anybody fighting for them and they’re right,” Cordray said. 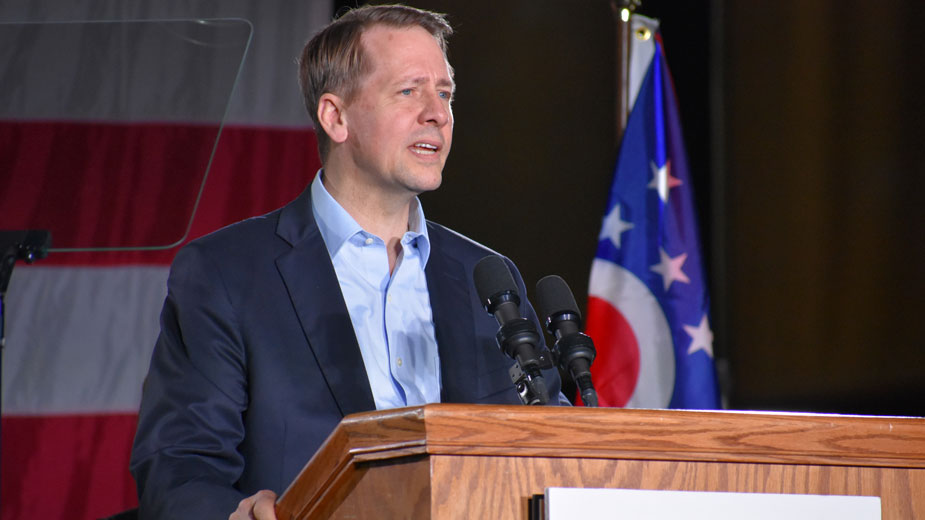 The reason they have been able to do this for so long is because of their efforts to make it harder to vote in Ohio, she continued. Republicans have introduced 38 such bills, 13 of which were signed into law, and have gerrymandered congressional districts for 30 years, she said.

As secretary of state, much can be done “on Day One to make voting easier in our state and to stop the purging of eligible Ohio voters,” she said. The secretary of state also is part of the panel that redraws congressional districts, she said.

Monday’s event came eight days before the midterm election Nov. 6 and followed a week of harrowing events attributed to racism, anti-Semitism and violent opposition to Democrats.

Last week, two black customers at a Kentucky grocery store were shot in an incident being investigated as a hate crime and a gunman killed 11 people during a service Saturday at a Pittsburgh synagogue. And after being arrested on Friday, a Florida man has been charged with sending more than a dozen pipe bombs to prominent Democrats including Biden, Obama and 2016 presidential nominee Hillary Clinton, as well as CNN.

Some critics blame the heightened tensions on the often-harsh rhetoric of President Donald Trump, who has demonized opponents and characterized news organizations that don’t provide flattering coverage of him and his administration as “the enemy of the people.”

“Our political opponents are not our enemies. The press is not the enemy of the people,” Biden countered.

“I know sometimes these days anger, hatred and viciousness seem like they’re going to overwhelm us,” he continued. “It’s on our leaders to set the tone and dial down the temperature.”

Americans from both parties “want desperately” to change the nature of today’s dialogue, Biden continued. “We can overcome this moment,” he said.

“We do not need bullies,” said Betty Sutton, Cordray’s running mate. “We need leaders who will take the pain, the anger, the frustration, the sadness that we have bottled up inside and channel it into concrete action so that we never have to face another week like that one again.”

During the event, Biden also took special note of U.S. Rep. Tim Ryan, D-13 Ohio, calling the congressman, who had spoken earlier, back up to the stage.

Biden, who is considering a 2020 run for president, said Ryan was someone “who I want to make sure is on my side” and “one of the guys that did the most” to help Obama and him in the 2008 and 2012 elections.

“This is the guy who I want in my foxhole,” he said.

People in powerful positions are intentionally trying to divide the working class because then they get to pass huge tax cuts that primarily benefit the wealthiest Americans, Ryan said.

“They get to cement a system that’s already rigged and it’s our job to fix it,” he said.

U.S. Sen. Sherrod Brown, D-Ohio, said Cordray was “always willing to take on the rich and the powerful” while his Republican opponent, Ohio Attorney General Mike DeWine, has sided against consumers and with Wall Street, payday lenders and pharmaceutical companies. On his first day in office as attorney general, DeWine joined a lawsuit opposing the Affordable Care Act.

Among those attending Monday’s event was Margaret Chiarella of Warren. Chiarella, who held a “Women Against Trump” sign, said she is “100% against Trump and everything he represents,” including his support for white nationalists. 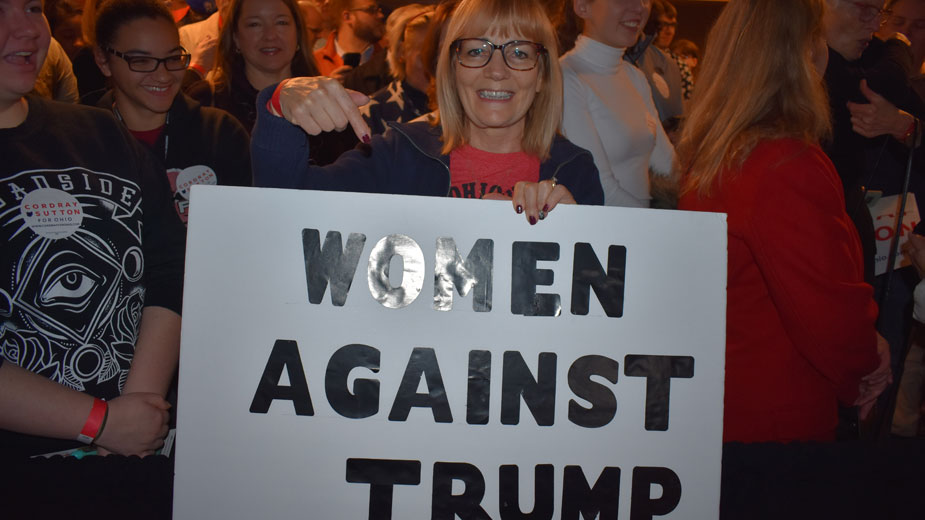 Gov. John Kasich, Aurilio acknowledged, at least sits down with autoworkers, even if they don’t always agree. With DeWine, he is concerned about health care, “which is one of the biggest burdens on us,” he said.

“He had a lot to say about the state of America and how we can improve,” Ash said. “His words were very inspiring.”

Mitchell Wilson of Hartford, a YSU sophomore studying long-term health care administration, characterized himself as a conservative. He said he thought the speakers were passionate, and was struck by their calls to unite the country.

“This is a really divisive time in America,” Wilson said. He acknowledged that Trump’s rhetoric “contributes” to divisiveness in the country but doesn’t think that rhetoric can be “fully blamed” for violence.

Outside Monday’s rally, Mark Munroe, chairman of the Mahoning County Republican Party, joined the party’s vice-chairwoman, Tracey Winbush, and others to remind voters that there is “a better choice” for Ohioans than Cordray, who he called a “typical tax-and-spend liberal Democrat.”

Munroe warned that Ohioans “don’t want to go back to the days” when former Gov. Ted Strickland and Cordray ran Ohio during the recession, when the state lost 400,000 jobs and its rainy day fund was drained to 89 cents.

“We just want to remind folks that, under Republican leadership in both Washington and in Columbus, Ohio is the most rapidly growing state in the Midwest in terms of job creation,” Munroe said. “Ohio wages are up 20% compared to the national average.”

YOUNGSTOWN, Ohio – U.S. Rep. Tim Ryan’s campaign for U.S. Senate raised $17.2 million during the third quarter of 2022, the campaign reported this morning. The Q3 haul was nearly double the $9.1 million that Ryan, D-13 Ohio, raised during…

WARREN, Ohio – U.S. Rep. Tim Ryan kicked off a stateside bus tour Tuesday morning to support his campaign for U.S. Senate in the leadup to the Nov. 8 general election. Ryan, joined by his wife, Andrea, debarked the bus…