YOUNGSTOWN, Ohio – There’s plenty of work to be had by the region’s architectural firms. Medical and assisted living centers are popping up throughout the area. Schools are looking to bring their classrooms into a new era of education. Buildings are being repurposed and new-construction projects are churning.

Not all of the projects are glamorous. Something as simple as adding a wheelchair ramp requires checking and double-checking that it follows code and fits with the rest of the structure. Those are the projects that make up much of an architect’s work.

But that’s not to say their work is all mundane and monotonous. Every so often, a project springs up that allows architects to play with new ideas, improve on older methods and have fun.

“It’s why you keep doing it. I love doing this and I’ve been doing it for a long time. I personally love doing medical projects because there are so many reasons to do and try things,” says Rodney Lamberson, principal at Strollo Architects.

“This project was driven by the changing nature of health-care delivery. We’re going from small, private practices of two or three physicians to being centralized,” Lamberson says.

The center features plenty of technology, including check-in kiosks not all that different from what can be found in airports. But what Lamberson enjoyed most on the project was how the building itself contributes to the treatment process.

Going to a hospital can be stressful. Sterile, white hallways lead to section after section that looks the same. Rooms can feel sealed off from the outside world.

“The most salient point to the building is the relation of patients and staff to the outside, giving them as much a sense of place and calm as possible,” the architect explains.

In the examination rooms, the windows are set high on the walls so patients inside can see out, while in the physical-rehab suite, windows are glazed so outsiders can’t see in, but those inside can take in the landscape.

“Every place you go, you are oriented to the outside,” he says. “You always know where you are. We’re forever trying to get rid of that sense of fear or trepidation.”

While not everything on the building was perfect, he concedes, post-opening meetings with Mercy Health staff showed Lamberson and his team at Strollo Architects what can be improved.

“It’s an iterative process that we’re always going through, trying to refine it both from the inside and outside,” he says.

With that kind of information, the Howland Medical Center has informed similar projects at Strollo that have come after it, such as one in Kentucky that recently began construction.

“You learn from everything you do. You always find something that didn’t work as well as you hoped and you always find things that are worthy of repeating,” he says.

Crucial to that process are the people who will be using the building. Across the state line in New Castle, Pa., Eckles Architecture President David Esposito was part of the firm’s team tasked with designing a new Steam – science, technology, engineering, art and math – hub for South Fayette Township School District southeast of Pittsburgh. Part of the year-long design process was meeting with teachers to find out what students would need.

“The educators know what spaces they need to do this,” Esposito says. “We’ve had enough experience doing this with different school districts that we’ve learned the tricks of the trade. We work with consultants and vendors that sell this equipment; they stay on top of these trends.”

The hub, part of an 80,000-square-foot expansion, features a MIT-certified fabrication lab outfitted with equipment plucked from the list of MIT’s approved components, including computer-controlled routers and milling machines.

“This is a hybrid of a traditional wood shop or metal shop with sophisticated computer equipment,” Esposito says. “The room is surrounded by computer labs for students to generate instructions for these machines to manufacture.” 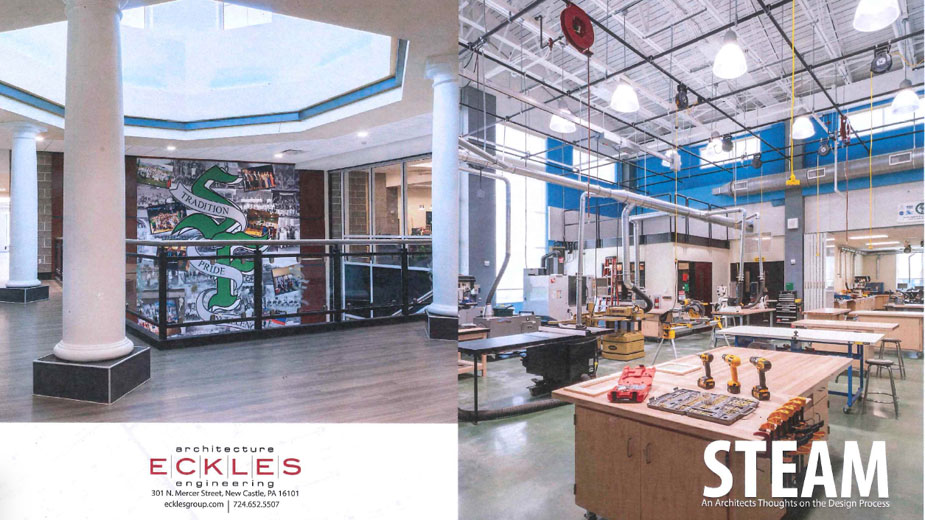 Part of the design process was developing a ventilation system that would help keep the lab free from dust and metal shavings that accompany students’ work.

“When you turn on a machine, it’s interlocked with the collection system so when you start making something, it fires up and sucks up dust,” he says. “It keeps everything clean.”

South Fayette has several corporate partnerships, including with cookware company All-Clad Metalcrafters and Bayer’s material science spinoff, Covestro. Both are based in the Pittsburgh area and work with students, giving them real-world problems to work on in the lab.

“If you go to the lab, you’ll see stuff laying around that’s from All-Clad and these kids are working on problems,” he says. “It might be packaging or figuring out how to insulate a handle. They’re giving these kids actual problems.”

Also included in the school project was a performance space equipped with technology to allow students to film, edit video and record music. Elsewhere, Eckles developed kivas, circular rooms with whiteboards wrapping most of the way around. Accommodating up to 20 students, the rooms are designed to encourage group brainstorming sessions.

“You have multiple disciplines coordinated for education and solving problems and doing projects in groups,” Esposito says. “Students are learning collaboration. They’re learning to communicate.”

The South Fayette innovation hub, as the architect calls it, is representative of a larger change in primary education. The school district starts teaching students how to code in third grade and throughout its system has varying class types close together.

Like his counterpart at Strollo, Esposito says the South Fayette project has influenced Eckles’ later work in the education field, including elements that have been brought to the Sharpsville and Sharon,Pa., school districts.

A short jog down U.S. Route 422 from the Eckles Architecture office in New Castle, Golden String Inc. has laid out a vision for a new camp at Farmer Casey’s Ranch. While still early on in the design phase, Olsavsky Jaminet President Tracie Kaglic says she and the rest of the firm are having fun with these early days of the project.

Spread out over 43 acres, initial plans call for cabins, a lodge, an amphitheater and a pasture for horses.

“There’s discussion about a horse barn that could be used for a therapy facility. It’s all just sketches on paper at this point, but it’s very interesting,” she says. “Normally, we’re dealing with public buildings or private buildings that aren’t ‘fun.’ ”

With horse barns outside the realm of everyday work at Olsavsky Jaminet, Kaglic says the research part of the project has brought in some additional enjoyment.

“Right now, they take clients to other locations across the state and spend a weekend or a couple nights. They want to recreate what they experience at other sites on their own property,” she says. “As a part of Austintown Rotary, I knew there’s a woman in the North Jackson area who has an equestrian facility and does therapy. There are local people to talk to.”

The downtown Youngstown company is also leading Campbell Schools’ Community Literacy, Workforce and Cultural Center project, which broke ground over the summer. Among the features are the city’s branch of the Public Library of Youngstown & Mahoning County, an urgent-care center, a wellness center and a meeting space that can be subdivided.

“It’s a large competitive gym with basketball courts, volleyball courts, pickleball courts, batting cages. It has a four-classroom STEM school,” Kaglic says. “There are so many uses and functions all morphed into one project. And because you’re working with grants and school funding, you have limited resources.”

But being able to develop something that touches on so many uses can be reinvigorating, providing a break from designing another wheelchair ramp.

“You can get stuck in the monotony and design the same thing over and over again. For the size firm we are, I think we’ve been fortunate to have a realm of different projects,” Kaglic says.