BOARDMAN, Ohio – In the not too distant future, Boardman residents could walk on natural winding trails suited for hiking, even horseback riding.

Boardman Park has put in motion its ambitious plans to incorporate the Southern Park Historic District into its operations.

Other proposed amenities such as the preservation and renovation of landmarks like the Southern Park Stables, the Smith Family Homestead and introducing new educational programs add up to an exciting future for the park and the township, officials say.

“Keep in mind, a lot of this is conceptual right now,” says Dan Slagle, executive director of Boardman Park.

The major thrust is to preserve the historic integrity of the area, Slagle says, while returning the land and its buildings to productive use.

The stables, for example, are listed on the National Register of Historic Places. They once served as stalls for the Southern Park racetrack – built in 1908 by H.H. Stambaugh, David Arrel and Ohio’s Civil War governor, David Tod.

The stables, built four years later, are the sole remaining structure related to the racetrack and were last owned by the late Janie S. Jenkins, former columnist for The Business Journal, and for 43 years, a reporter and features writer for The Vindicator. In 1993, Jenkins donated the property to the park district, Slagle says. The land is north of Washington Boulevard and east of Tod Avenue.

“She was a naturalist, a horse lover, a dog lover, and a bird lover,” Slagle says. “We’d like to see this land used for equestrian sports and use her living quarters for an educational component.”

The Mahoning County 4-H Club uses the stables, Slagle says, but they require some renovations. And, the land could be converted into a competitive equestrian ring replete with a judge’s stand and bleachers.

Other plans call for a restored orchard, community gardens and a habitat for waterfowl.

“Washington Parkette is a beautiful piece of property and there’s a garage there that we’d like to turn into an open-air pavilion,” he says. 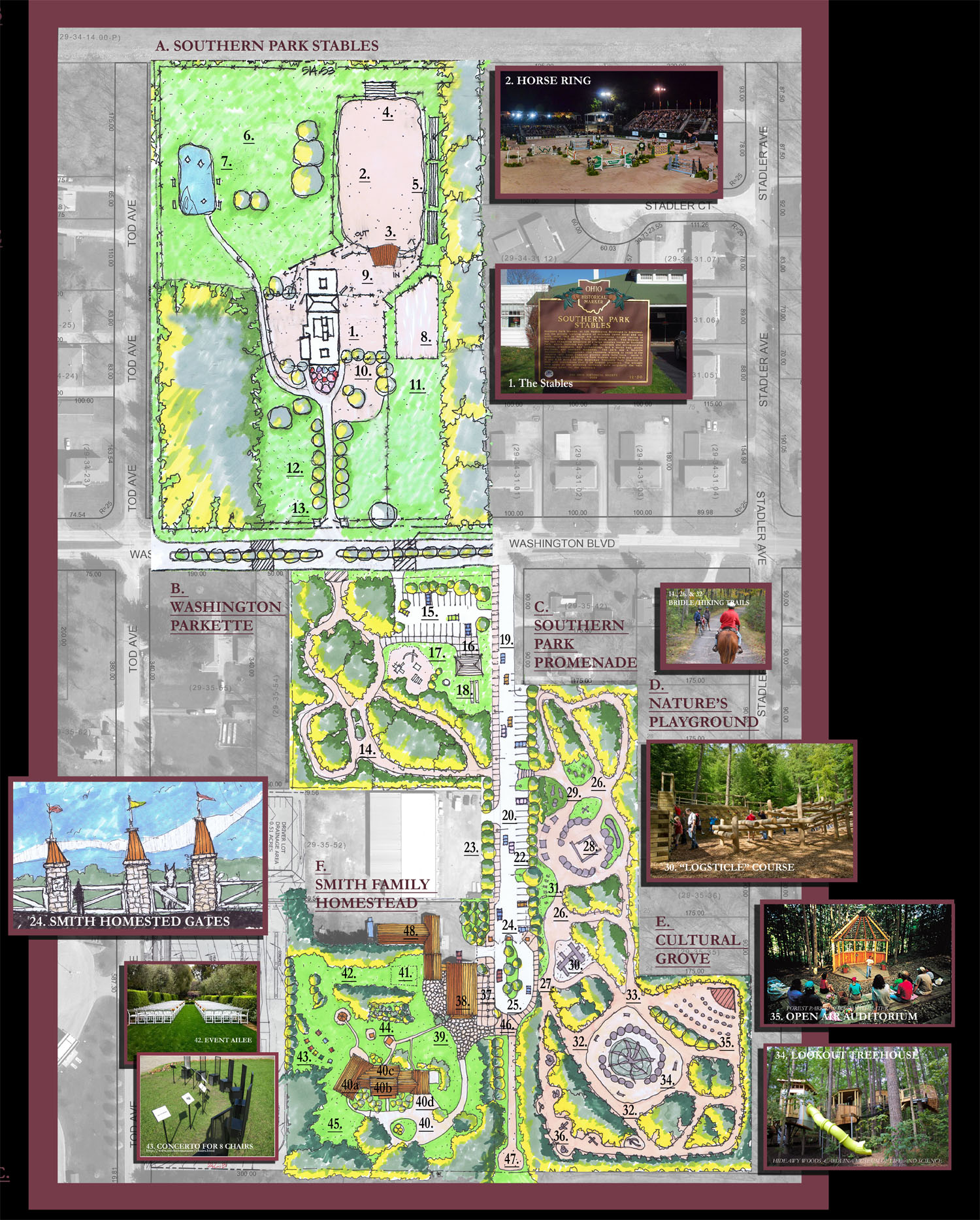 Slagle says special emphasis is on developing new trails to establish Boardman as a “walkable community.” The trails would connect with the major southern trail that extends from Boardman Park.

Washington Boulevard borders the Parkette to the north and Raupp Avenue to the east, while land for the promenade, Nature’s Playground and Cultural Grove is farther east across Raupp.

Plans for this area would offer additional trails and an interactive “nature’s playground” where amenities such as play sand areas are integrated into natural wildlife, streams and trees, Slagle says. “It’s a fun learning experience,” he says.

One of the crowning proposals of the new plan, Slagle says, is the preservation of the Smith Family Homestead, established by Clarence Smith Sr., the founder of Diamond Steel.

“This was a vision my father had for a long time,” says Clarence Smith’s son Greg, chairman of Compco Industries. “He thought we really needed to make a statement as to what Boardman is.”

Slagle says the Smith Homestead houses a majestic barn that can be used for social gatherings, receptions or weddings.

“It’s in beautiful shape, and we’d like to use it as an activities center,” the executive director of the park says.

Over the last two years, Ron Faniro, principal of Ron Faniro Architects in downtown Youngstown, helped design the plans based on ideas generated through the park commission and public. The Smith Family residence, for example, could be used as an educational forum and the indoor pool converted into a community room.

“There’s nothing in Boardman that is a freely open community space,” Faniro says.

It was important to draw a direct connection to the history of this area, the architect says. “This was a lot like Idora Park,” he notes. “It was used as a place of recreation.”

The racetrack, Faniro says, was among the big local draws of the early 20th century and regarded as a destination venue for people of the Mahoning Valley.

“We wanted to take this and capitalize on its history,” he says. “It was important to intermingle history, recreation and interactive education. All of that was very well received. It meshed with their vision of what Boardman could be.”

The plan is still in its infancy, Slagle says, and no price tag has been attached to precisely how much the project would cost.

“There really aren’t a whole lot of details yet,” he says. “So there are no cost estimates.”

Once those costs are determined, the park would seek support through sponsorships, donations and partnerships with other not-for-profit organizations, Slagle says.

No deadline or schedule for work of the multi-faceted project has been set, either.

“I’d like to be optimistic,” Slagle says. “Once we know what we’ve got and what the cost is, then usually you’d want to do things in five years.”