WARREN, Ohio – Development specialists from across the Mahoning Valley on Friday presented Gov. Mike DeWine with a bold new strategy to enhance the quality of life in the region: consider the Mahoning River Corridor as a state park,

“We’re just kicking the tires right now,” said Jim Kinnick, executive director of the Eastgate Regional Council of Governments. “We’ve got a consultant studying the entire river, looking at pockets that we can develop.”

Kinnick said several targeted areas along the river could meet state park status – Lowellville, downtown Youngstown or Warren, for example – and then perhaps at a later stage connect these nodes with trails or roadways. “Or, we could just capture a single area,” he said.

The objective is to draw more attention from the state to the importance of the Mahoning River, Kinnick said.

DeWine and Lt. Gov. Jon Husted attended the first quarterly meeting in 2019 of the Mahoning River Corridor Mayors Association, held at the headquarters of Covelli Enterprises. The organization is made of up mayors of nine communities in Mahoning and Trumbull counties that line a 26-mile stretch of the river between Newton Falls and Lowellville. 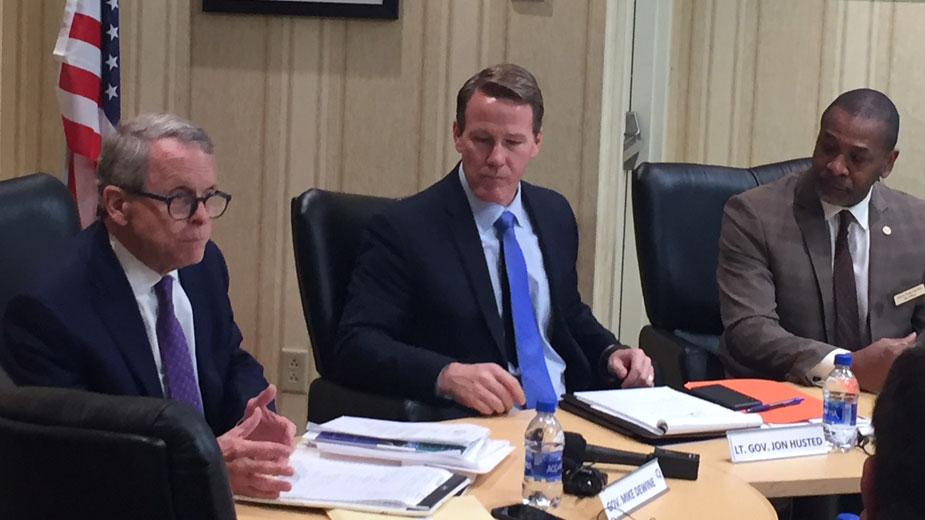 “I like the idea of a Mahoning River State Park,” DeWine told reporters after the meeting. “I’m very excited about what’s already been done with regard to the river.”

Meanwhile, the effort continues to remove nine dams along the river, Kinnick noted. Work has started on the Lowellville dam removal, and the Struthers dam is slated for removal this summer, while three others along the river could be gone the following summer.

Conceivably, Kinnick said that the entire nine-dam removal project could be completed in 18 months.

Then, the Ohio Department of Natural Resources would have a better handle on how to proceed with a state park designation, he said. “We’re exploring our opportunities right now,” he said.

The meeting was attended by a large delegation of Mahoning Valley elected officials, including commissioners from Mahoning and Trumbull counties, and the area’s delegation to the Ohio legislature.

DeWine noted that he was first there to listen, but he took some time to explain some of his administration’s early initiatives, such as a proposed gas tax that would offset a projected $1.5 billion shortfall at the Ohio Department of Transportation.

The governor told attendees that should the General Assembly agree to the proposal, it would mean “significant money to not only ODOT, but other communities.”

Under DeWine’s plan, the state would impose an 18-cent tax on every gallon of gas sold in the state, generating about $1.2 billion. This money would be used to fund critical highway improvements, while also using 40% of the revenue to road improvement projects in local communities.

“Without this, there will be no new projects at all,” he said. “This is about economic development and safety.”

DeWine also listened to ideas from the mayors and elected officials attending the meeting, and the discussions ranged from early child education to General Motors Co.’s Lordstown plant.

The governor and lieutenant governor made it a priority on the second day of their administration to travel to Detroit to speak with GM CEO Mary Barra about Lordstown. GM announced in November it would idle the plant and not allocate a new product to the facility, costing 1,500 jobs.

State Sen. Sean O’Brien, D-32, Bazetta, asked DeWine about any updates regarding the fate of the Lordstown facility.

DeWine said he was in contact with GM officials as recently as Friday morning.

“There’s really no new update,” he said. “But I want them to know that we are very concerned, and very interested.”

The governor told GM executives Friday that should the company decide to reinvest in the plant and place a new product there, the state would be eager to provide any assistance the project needs.

“If that’s not going to occur, and another company is going to come in, then we would be helpful to that company as well,” DeWine said. “We want jobs here in the Valley.”

The governor added that he is under the impression that GM is talking with other companies in relation to the plant, and said he wants the state to become involved in the process as early as possible to provide any assistance. “We have to know what a company would want from the state and what we could do to help.”

DeWine then clarified that GM officials did not confirm that the automaker was talking with other companies to occupy the plant. “They didn’t tell me that,” he said. “But, I would surmise that there are some discussions going on.”

Other topics of conversation included issues related to economic development.

Mayor Jim Melfi of Girard suggested to the governor that the state revisit its brownfield redevelopment program in order to accelerate the pace of cleanup efforts at former industrial sites. Businesses, he cautioned, can’t wait for these sites to be cleaned, leaving communities such as Girard with old, abandoned properties where busy factories once stood.

“My heart aches to see that we’re not where we used to be,” he said. “We have to think about where we came from.”

Husted emphasized partnerships between technology and manufacturing initiatives, and praised efforts such as Youngstown State University and its work in additive manufacturing. He said that one of his goals is to see that those already working in manufacturing or tech, for example, receive additional training during the course of their careers so the can be better prepared for the future.

“We’d like to free up more training dollars that already exist and use them in a more proactive way,” he said.

DeWine said that the meeting proved helpful, and was most impressed with the level of cooperation between the counties, villages, cities and economic development agencies.

“If there’s one takeaway, it’s that the Mahoning Valley speaks with one voice,” O’Brien said.