YOUNGSTOWN, Ohio – Chris Sammartino has his work cut out for him. On a Wednesday in late August, the vice president of The Lake Club in Poland and his team are preparing the club’s banquet space for three weddings that weekend as well as a dinner and corporate gathering on the club’s lawn that week.

It’s business as usual for the club on Paulin Road, which has every Friday and Saturday booked solid this year, Sammartino says.

“We’re obviously known for our weddings,” he says, crediting the club’s layout and view of Lake Evans. “We’ve created an atmosphere here that you can’t just go and create somewhere else. You don’t have to put a lot of money into decorating this place.”

While weddings make up much of the business for banquet and event centers from late spring through early fall, some are finding ways to boost business during the off season as well as during the week year-round. Graduation parties have become one of the ways to accomplish that goal.

For instance, Boardman Park has seen graduation parties increase about 40% since 2010, says its office administrator, Angela Davis. Graduations typically dominate reservations during the first part of the summer with reservations being made well in advance, she says. For the summer of 2019, most weekends are already booked.

Davis credits the park’s accessibility as a key reason for the increase in graduation parties. Situated off U.S. Route 224, the park is a short drive from Interstate 680, state Route 11 and the Ohio Turnpike.

“Many hosts invite people from out of the area,” Davis says. “People say, ‘I have people coming in from everywhere,’ and this is a central location.” 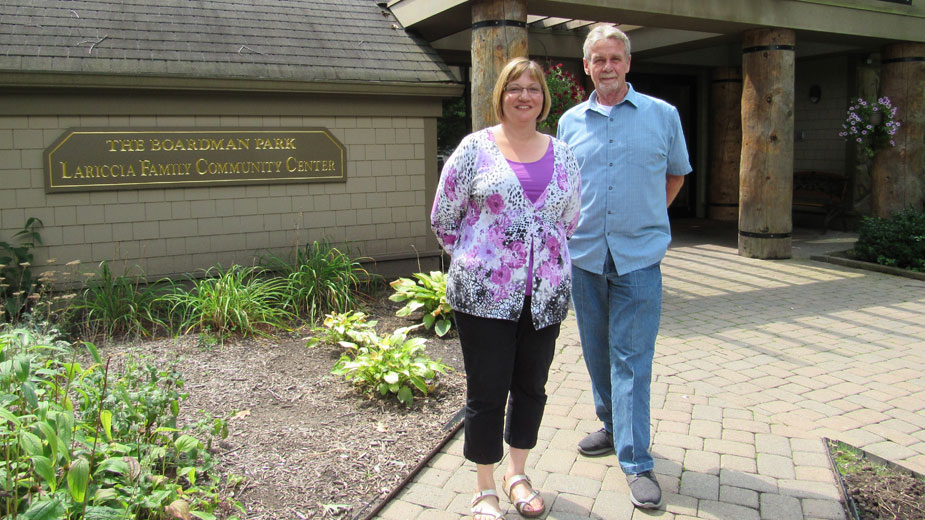 Angela Davis and Dan Slagle say graduation parties at Boardman Park are up 40% since 2010.

Parents also appreciate the ability to bring their own caterer or cook themselves. All rooms for rent at Boardman Park are equipped with a kitchen, including the Lariccia Family Community Center, which holds up to 232 people.

“The rooms are all set up for them,” Davis says. “They don’t have to set up or tear down.”

The Links at Firestone Farms in Columbiana hosted 18 graduation parties last spring and fall, and is on track to match those numbers this year, says its general manager, Mike Ferranti. Most graduation parties are held in the 100-year-old barn on the property, but The Links caters off-site parties as well.

“We reached out to a few of the schools, had some proms here and that got the teachers involved,” Ferranti says. “Coaches called to book sports events and they booked the sports banquets.”

The barn helps The Links capitalize on the trendy barn weddings, which have increased there by 10% to 20% from five years ago, he estimates. The Knot, an online wedding-planning resource, reports that last year, 15% of couples held a barn wedding, up from 2% in 2009.

Ceremonies are typically held in the barn, which sits up to 70, followed by a reception in the main banquet hall that holds up to 300.

“It’s something different. In the area, there aren’t too many barns you can hold a ceremony in,” Ferranti says. “It’s a simple, elegant place, but not overly country. You can decorate it a hundred different ways.”

For The Lake Club, it’s common to see wedding ceremonies take place in the rose garden area or near the lake. Receptions are typically held in the main banquet hall, which can hold up to 500 when used with the Sky Room, says Vice President Sammartino. The club’s banquet space is open to the public as well as members, and its capacity for events incorporates the entire grounds.

Sammartino recently hosted a two-day business meeting and dinner for 14 guests from Miami, Chicago, Atlanta and Pennsylvania. The dinner was a success and it intrigued other members who were at the club that evening, he says.

“One of our members happened to be sitting in our grill room having dinner, and he said, ‘How do I get that table down there?’ So he’s doing a corporate event tonight on the bocce courts,” he says.

The Lake Club hired a third sales and event coordinator, Betsy Bresnahan, to focus specifically on corporate customers and outside sales.

Over the last three to four years, corporate functions there have increased 10%, specifically Christmas parties, which dipped after 2008 when the economy forced companies to cut back, Sammartino says. But as business improves, companies are now looking to give back to their employees and clients.

“They realize that if they give a little back, they’re going to get more back in return and it’s going to help them for years to come,” he says. “We have some Christmas parties that companies will book two to three years out to make sure they continue to have the same dates or the same time frame.”

The club is booked well into 2019 and is already taking deposits for events in 2020 and 2021, he says. Additionally, staff is working to increase weekday business by tying in rounds of golf with meeting packages.

It’s a tactic The Links has successfully used in the past and looks to increase next year, Ferranti says. Depending on the size of the group and the reservation time, The Links builds a package by pairing a lunch meeting with golf afterward “to make a day out of it for your employees,” he says.

Ferranti says this spring, a group of 60 booked a lunch-golf package in lieu of their usual reservation at a hotel conference room, he says.

“Combining it with golf made it more exciting,” he says. “They said they got more attendance because of the golf.”

Boardman Park’s natural surroundings and wooded hiking trail attract companies for team-building events, Davis says. And other amenities, such as the bocce courts and volleyball courts, are well within walking distance.

“A lot of businesses do scavenger hunts here,” she says. “They’re able to use the grounds however they like.”

Corporate events make up about 10% of the park’s overall business, but bookings are increasing because the hours are more flexible during the week, Davis says.

It’s also cost-effective because all businesses get the discounted rate offered to Boardman residents, she adds. And with the park’s close proximity to Boardman restaurants, many companies get their events catered.

Being alcohol-free adds to the popularity of the park for graduations, says its executive director, Dan Slagle, because it gives parents peace of mind that no minors will be served alcohol. Whether that is a hindrance to booking other types of events, such as weddings or family reunions, “based on our popularity, it doesn’t look like it,” he says.

In 2017, Boardman Park booked 2,500 reservations for meeting places with an average attendance of 105. Adding that total to the number of casual visitors and attendees of annual events, such as Independence Day fireworks, Oktoberfest and others, the park set an attendance record of 542,870.

The Links at Firestone hosts about 200 people every Sunday for brunch, and gets “a lot of traffic” for its Friday fish dinners during Lent, Ferranti reports. These types of weekly events account for about 20% of its business, he says, which allows him to keep his staff employed through late fall, winter and early spring.

“It’s important as a business to keep that cash flow coming in during the lean times. We like to keep people employed year-round,” he says. “When you have good people, you want to keep them and make sure they’re well taken care of.”

Pictured above: Chris Sammartino, vice president of The Lake Club.