Borough of Mercer Retains Its Charm

MERCER, Pa. – Mercer Borough Mayor Ross Vernon talks admiringly about the Mercer County Courthouse, which sits in the center of the square downtown.

People regularly drive to the square to look at and take pictures of the courthouse built in 1909. It’s the third – or fourth – depending on whether you count the temporary courthouse that served as the seat of government while the original was constructed.

The borough is the seat of Mercer County, which might seem an anomaly, given that its population – just under 1,800, based on the most recent U.S. Census Bureau estimate – is an eighth of the county’s largest city, Hermitage, which lies to its west.

Roughly a nine-mile drive from the Grove City outlets, the borough has close access to interstates 79 and 80.

“We do get a lot of traffic through here. A lot do stop, particularly in the summer and on the weekend,” Vernon says.

“The town is really unique,” says Dotty Pintar, executive director of the Mercer Area Chamber of Commerce the past seven years. “It’s small. The courthouse is in the center of town but it’s beautiful in the summertime.”

Among the major industries are Imperial Systems Inc., International Timber and Veneer and East Coast Chair and Barstool, Pintar notes.

“Then we have what’s called the Mercer Area Boomtown Initiative,” she continues. The initiative, launched in 2014, is modeled on a similar program in Grove City. “A group of people is looking to get different activities going in town,” she says, that are related to the arts.

(For more from Pintar and Mayor Vernon, watch the Our Towns: Mercer video.)

A major project was the installation of a mural that depicts the old train station, she says. Other initiatives are the Brews, Bikes and Bands event and a youth committee that participates in spring and fall cleanups within the borough.

Mercer hosts an array of businesses, small retail shops, restaurants and professional offices, many on or near the square. “In the last year, believe it or not, we have had five businesses opening in the Mercer area here,” Pintar says.

Businesses range in age from less than a year to more than a century in operation.

The firm sells real estate, performs appraisals and manages property, Stitt says. Although the business still gets work from the telephone, most comes via the internet, she says. 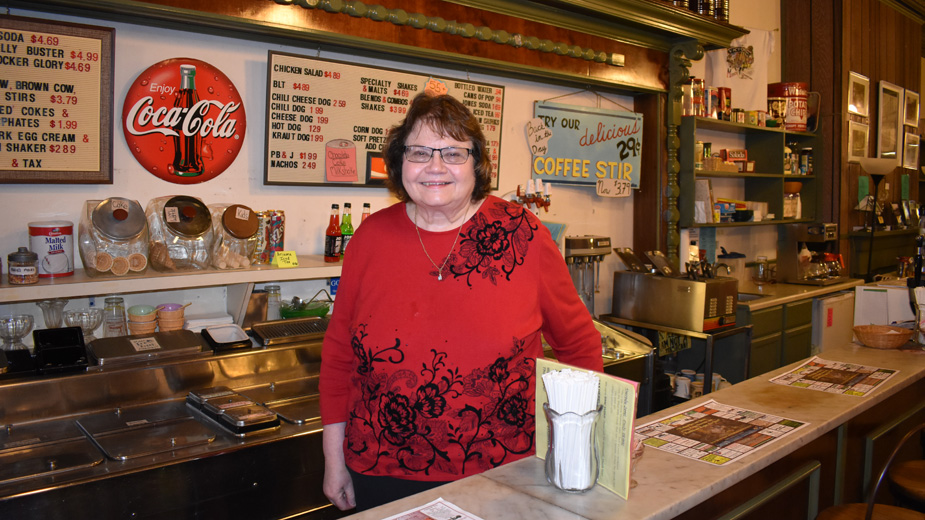 “It was a drugstore from 1880 through probably the 1950s or 1960s, and then it was a shoe store for a while,” Boggs says. Pharmacist Sue Baker moved her drugstore there in 1985, bringing the soda fountain with her.

Baker was Boggs’ first paying client, and when she decided to sell, Boggs bought it. “It had more meaning to me than just a store because she had done so much work in it,” she says. “And she was a friend.”

In a nearby building more than a century old, J. Hicks on the Square, 127 N. Diamond St., will be open four years this June, owner Jim Hicks says. Hicks, who has “always been in the restaurant business,” was once a disc jockey in the restaurant and was eager to buy it when he learned it would be for sale.

“We thought the location was fabulous, which it is, and we decided to make the move and purchase it,” he says. Daytime business, driven in part by the courthouse, accounts for at least half of his sales. “Then on the weekends we have music here, so we get people in here form the outskirts,” he adds.

Operating a restaurant in the borough of Mercer is “a very tough business,” says Mark DiSilvesri, who with his wife, Debi, runs Debi’s Diamond Street Bakery, 110 S. Diamond St.

The bakery and restaurant opened nearly five years ago, he says. Because Debi didn’t like where she was working, they opened in a downtown building they own.

“There are 27 places to eat in this town, if you count the convenience stores, the clubs” and even the local grocery store, Walt’s. The restaurant draws some lawyers, judges and other business from the courthouse, but most remain loyal to the places they’ve patronized for years. “But we also have our really loyal customers,” DiSilvesri says.

Among the newest businesses on the square is Peterson’s Music Shop, 110 N. Pitt St., which opened nine months ago, owner Mike Peterson says. Laid off from his last job, he and his wife – both musicians – saw a good opportunity to do something different. 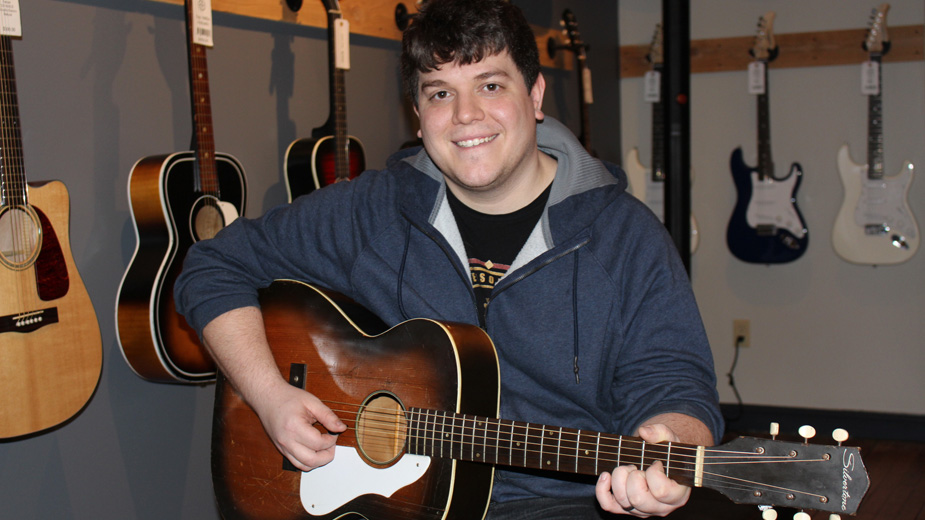 The shop sells musical instruments and supplies and the Petersons offer music lessons. “We’re not really business people but we’re making a go of it here,” he says. “We’re definitely far away from other stores like ours, so we’re filling a need in our area.”

Lord – who operates the shop with her husband, Frank – had been a calligrapher and a watercolor artist. The couple had operated a custom framing and gift shop.

With the popularity of the internet, “people thought they could do calligraphy with all the different typefaces out there,” she says. “We decided we would change directions. I love to quilt so it was a natural transference.”

The Gallery sells material, patterns, books and even equipment for quilting, and also offers classes. Most of its customers are women, but there are some male quilters, “and some of them are fantastic,” she says. Most of her customers are 55 or older but she does get some younger mothers interested in making baby quilts, placemats, table runners and other smaller items. 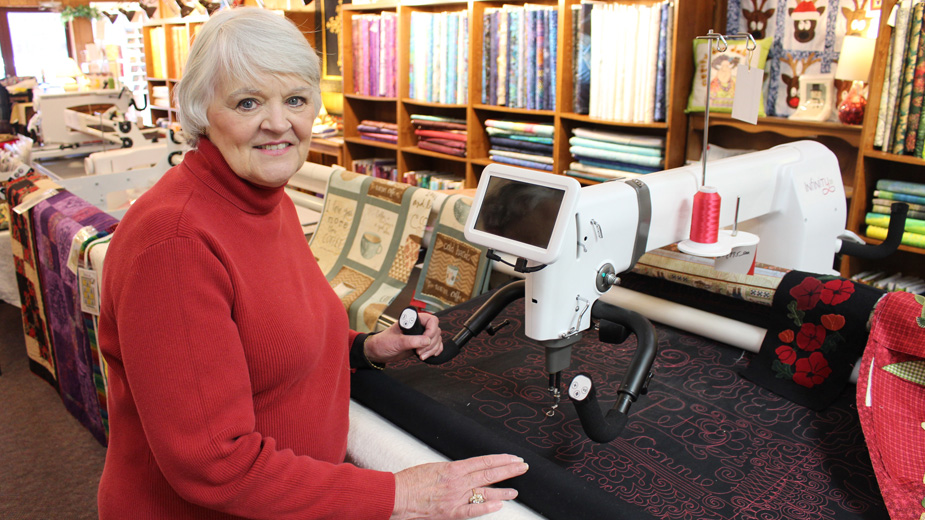 Pictured: Sandy Lord has operated Gallery of Fabric for 22 years.

The Gallery draws from as far as Canada, although most come from within a 90-mile radius.

Like Peterson, Ron Rafferty Jr., owner of Rafferty’s Printing, 106 S. Diamond St., says he benefits from no competition nearby. “There’s no other print shop here,” he says.

The print shop, which has operated downtown the last seven of its 23 years, offers an array of merchandise that ranges from business cards, envelopes and letterhead to vinyl banners, printed shirts and window decals.

The shop gets much of its business from people who imagine they can use their computer to do what he does, only to learn they can’t. “Then they’ll get mad at you because you want to charge them for [fixing their mistakes],” he says.

Off the square, Shannon’s Kandy Kitchen, 225 N. Erie St., is gearing up for Easter. The factory and retail store, founded in 1962 by Ruth Shannon, moved to its address in 1978 when the property became available.

The production line supplies confections in-house as well as at satellites at Slippery Rock and Grove City, says Larry Shannon, Ruth’s son. Shannon and his wife took over operations in 2001.

Perhaps surprisingly, neither Easter nor Valentine’s Day candy account for the bulk of the business, Shannon says. That distinction goes to Christmas, which accounts for about 45% of annual sales.

Christmas has “the longest running season,” beginning at Thanksgiving and supported by office parties and corporate gifts, he reports. Easter business lasts a week.

Further out from the downtown, Ben Bissett Chevrolet Inc., 595 Perry Highway, has operated 65 years, 44 of which owner Benjamin Bissett has been involved. He has sold cars to the children of his first customers, he says, their grandchildren and even great-grandchildren.

Trucks make up three of each of the dealership’s four sales. “We do sell quite a few online, especially pre-owned, that go wherever the buyer happens to be,” he says.

Pictured at top: Dotty Pintar is the executive director of the Mercer Area Chamber. Ross Vernon serves as the borough’s mayor.