CORTLAND, Ohio – When talking to students in her role as the reigning Miss Ohio USA, Deneen Penn emphasizes the importance of being worker bees in their communities.

It’s a concept that the 20-year-old Cortland woman takes to heart as she operates her own business, the Ohio Queen Bee Honey Co., founded last winter.

“I love agriculture and business,” she says. “Beekeeping is just another aspect of business and it helps the environment as well.”

Penn’s inspiration to enter the honey business came at last year’s Cortland Street Fair. While attending the fair with her mother, they met a woman selling honey and Penn’s mother joked that they should do it too. The honey vendor agreed.

Penn, a business major at Kent State University at Trumbull, received her certification as a beekeeper last winter.

At the end of 2017, Ohio had 6,046 active registered beekeepers, according to the Ohio Department of Agriculture. Last year, operations with fewer than five colonies produced 599,000 pounds of honey, down 22% from 2016, and operations with five or more colonies that year produced 148 million pounds, the U.S. Department of Agriculture reported in March.

In Ohio, operations with five or more colonies produced 1.1 million pounds of honey in 2017, down from 1.2 million the year before.

Penn has three hives, each containing three types of bees: the queen bee, of which there is one in each hive; drones, males whose only purpose is to reproduce with the queen; and worker bees, who pollenate plants and collect nectar, from which the bees make honey to support their colony. 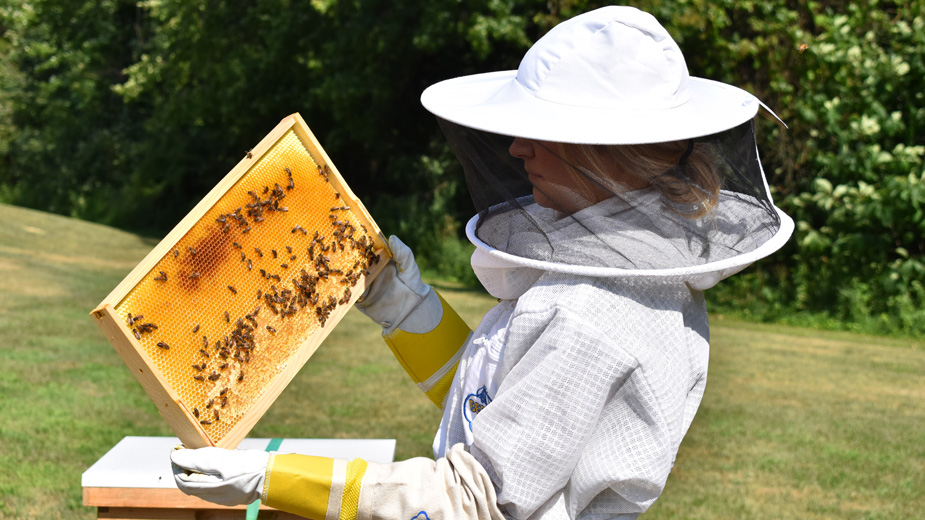 “I teach students the importance of being the worker bee in your community. Be the one who goes out and works for everything that you want to achieve,” she says. “Just like it is with the entrepreneurial spirit that I have, I hope to place those seeds in those students as well.”

Penn started keeping bees in March and expects her first harvest in early fall. In mid-July, she had to replace one of the queens, but the other hives were doing well. “Sometimes they don’t like the queen simply because she has a broken wing or her foot is messed up. Maybe they don’t like her smell,” she says.

Setting up the business cost about $800, Penn says. Her grandfather built her frames and hives, mitigating some of her expenses. An auditor certified that the hives are safe and the bees are being treated humanely.

“These are friendly little creatures, but we need to make sure that we’re treating them with respect,” she says.

When tending her hives, Penn wears a white beekeeper suit complete with veiled helmet – not exactly the tiara and evening gown associated with the pageant circuit.

At harvest, Penn will take each frame off the hive, cut off the wax, put the wax in a barrel, and spin and filter it to produce honey. She is working with her father on the company, and receives help from Ed Freel, president of the Trumbull County Beekeepers Association.

“[Freel] has been coming over, helping me with little bits of tips and tricks, and helping me figure out my first year’s hive,” she says.

Many people don’t realize that the honey they buy in larger stores is imported indirectly from China, Freel says.

“There is a large market for people who want honey that they know that heavy chemicals and pesticides and such are not being used in the hives. They want to know where the honey is coming from,” he says. “The market is growing and will continue to grow.”

With a large following on social media because of her pageant competitions, Penn says she will set up an Instagram page to promote Queen Bee once she’s closer to harvesting. Her goal is to sell enough honey to pay for college. Once she receives her bachelor’s degree, she plans to pursue a master’s degree in architecture.

Her professors at Kent State Trumbull have guided her in marketing and managing the company, she says. If demand grows enough, she might set up at the Cortland Street Fair or sell at one of the boutiques her family owns in the Shops at Andover Square.

In addition, she looks to expand beyond honey sales to include products such as unprocessed honey, beeswax, mead and small jewelry.

“It’s definitely something I see in my future because I’m very passionate about it,” she says.