CANFIELD, Ohio – From public works infrastructure projects to plenty of residential and commercial development, Canfield Township is “a busy place to be,” says the chairman of its board of trustees, Brian Governor.

Evidence of activity can be seen while driving the U.S. Route 224 corridor that leads into the township. Workers prepare the five-acre lot at the corner of Raccoon Road and 224 for the return of Do-Cut Sales & Service Inc.

The outdoor power equipment company sold the property after its store was destroyed by fire in September 2011, “and now they’re moving back as tenants,” Governor says.

7 17 Credit Union is building a new branch office off 224 as well, and the township’s new 160-foot-tall water-supply tank welcomes motorists arriving from Boardman or exiting state Route 11. The 500,000-gallon tank was completed this year in a joint effort by the township, Mahoning County Engineer’s Office and Aqua Ohio. When it’s in operation by the end of August, it will provide water to customers in the area outlined by portions of 224, Western Reserve Road, state Route 46 and Tippecanoe Road.

DiCioccio Construction “is probably half of our single-family permits right now,” she says. Another developer just purchased 106 acres off of Gibson Road and looks to build houses there in the price range of $180,000 to $225,000.

Brownstone Construction is seeing more interest now than in the last decade from customers building new in the Westbury Park development, says its home consultant and design specialist, Allison Sedoris. Brownstone is working with customers on seven lot deposits to potentially build new homes there, she says.

The company built the first model house in 2014, and “things really kick-started from there,” she says. Sedoris attributes the increase to the employment rate going up and a shortage of existing homes, as well as the attractiveness of building in Canfield.

“Canfield is a very desirable city and township to be in,” she says. “People admire the school system and a lot of people are trying to get into the school district.”

Westbury is a Stonebridge Neighborhoods development and includes a section of carriage homes. With just over 75 homes built, Westbury still has 30 lots ready for construction and more land to develop, Sedoris says. Customers are moving into the Stonebridge neighborhood and Saybrook Pointe Villas as well, she adds. 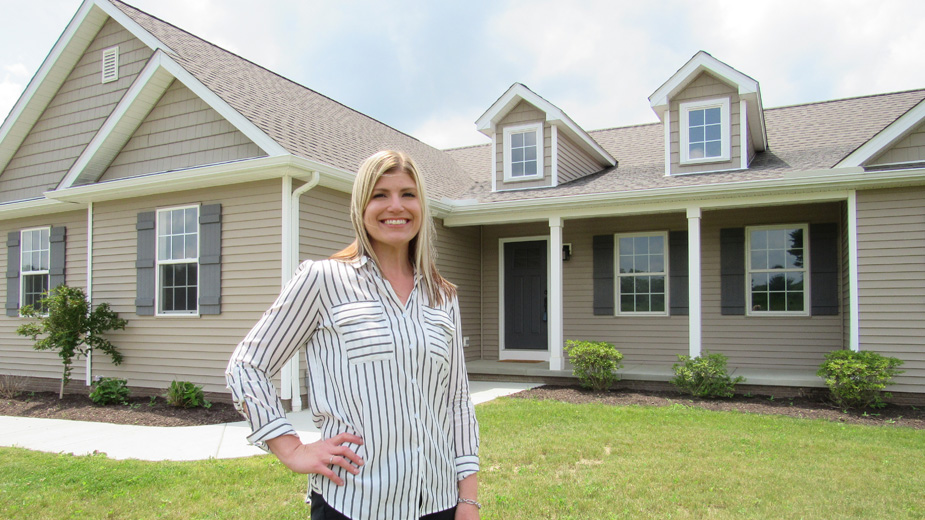 Allison Sedoris is a home consultant and design specialist for Brownstone Construction.

Demographically, the zoning department’s DeCapua says she sees a mix of new residents, from families moving into the area for work to younger couples to retirees who are downsizing to a villa or smaller property.

Zoning recently approved a permit for CTW Development Corp. to build a 26,000-square-foot banquet center in its Westford Lifestyle Community, connecting it to the Courtyard by Marriott hotel there. CTW looks to break ground in the coming weeks and be open for business by spring of 2019, DeCapua says.

Developing commercial and residential property is something of a balancing act for the township. Commercial properties are kept to specific corridors typically on the outskirts of residential areas, she says.

“What we call our 224 corridor is technically on the outskirts of our township,” she says. “And if you go west, we still have area out there that can be developed that would be prime for commercial business.”

In an effort to plan development the next five years, the township is including implementation of its land usage plan in this year’s budget, Governor says. The plan determines which corridors will remain residential and which will be zoned commercial. The project costs $50,000, he says.

“We don’t want factories everywhere and shopping centers everywhere,” the township trustee says. “We plan on making an initial spend on that this year.”

Residents will have an opportunity to contribute to the plan by forming committees that will take part in the process.

“And at the end of that five years, we’ll re-evaluate and start over again,” DeCapua says.

The township also is engaged in its second proposed JEDD, or joint economic development district, project with the city of Canfield, says Marie Izzo Cartwright, township trustee. Last year, Mahoning County commissioners delayed annexation of 18.83 acres in Canfield Township to the city until the possibility of a JEDD was discussed.

The land is part of 111 acres situated at the corner of South Palmyra Road and Route 224 – the former Lanterman Farm property. The proposed JEDD – a proposed project on the site named Millennial Moments – includes mixed-use development of commercial and multifamily residential structures, as well as landscaped buffer areas, according to documents.

Negotiations are in the final stages and the proposal is scheduled to be voted on by the township and the city on Aug. 14 and 15, respectively, Cartwright says.

Cartwright has been the township’s representative throughout the negotiation process.

“Hopefully, after all this work, it will turn out to be as good a project as the first JEDD in Canfield, which is the Canfield Community JEDD,” she says.

The Canfield Community JEDD resulted in construction of the $12 million Windsor House at Canfield skilled nursing and rehabilitation center, she says. For both JEDDs, the township heldpublic meetings to discuss negotiation with residents.

“We need their support. We’re not going to do anything that our residents aren’t comfortable with,” she says. “And if we don’t do the JEDD, the developer can still go to the city, get the land annexed but all of the extras that we’ve been able to get – such as the buffering, such as the tie-ins if necessary – will all go away.”

Meanwhile, a joint effort dubbed the “Mercedes Project” has the township working with the ABC Water and Stormwater District on an embankment stabilization project, says Keith Rogers, township administrator. Drainage from the turnpike has caused some erosion at the embankment and is threatening some apartment complexes, he says.

“They lost about five feet of the embankment, which is getting dangerously close to a patio,” he says.

The township secured a $145,000 grant from the state to cover construction costs, Rogers says, while the stormwater district handled the engineering work. Work began in late June and should wrap up this month.

The work had to be outsourced because “it’s a little bit bigger than what the township has as far as equipment goes, and manpower,” Rogers says. The township employs two full-time and two part-time public works employees.

“We assess each project as they come in,” he says. “If it’s something too large for our public works department to handle, then I bring that to the board and we try to find funding sources to help defer the cost.”

A second project on Pheasant Run, was completed in-house, which saved the township some money, Governor says. The project involves replacing two 18-inch culvert pipes that are starting to rot and collapse, which threatens the road above them.

“It’s a one-way in and one-way out, so it does need to be replaced before it collapses,” he says. “It’s a safety concern more than anything.”

In 2019, the township hopes to secure enough funds through the Ohio Public Works Commission to expand its paving program, Governor says. Because of budget constraints, the township is behind on paving.

“We pave every year, but we can’t pave as much as we want to,” he says. “We’re probably a good two or three years behind where we should be.”

Pictured at top: Among the projects along U.S. Route 224 in Canfield is the construction of a new plaza and store for Do-Cut Sales & Service.