CANFIELD, Ohio — There’s a certain charm – and some would even say a haunting appeal – about the Olde Courthouse Building in Canfield, a steadfast example of 19th century Classical Revival architecture that has anchored the south end of the city’s green since 1848.

Shortly after sections of southern Trumbull County and northern Columbiana County were apportioned to form Mahoning County in 1846, Canfield won its bid to serve as the seat of the newly established county. While it’s central location proved an asset, so too did the political clout of two of the village’s favorite sons: Judge Eben Newton and Elisha Whittlesey, the latter serving as comptroller of the United States Treasury between 1849 and 1857.

Along with the establishment of Canfield as the county seat came the first court of common pleas for Mahoning County and construction on a new courthouse commenced in 1846. By 1848, the building was finished and remains the symbolic heart of the city.

“There’s a lot of history here,” says Adam Costarella, a retired physician who purchased the building in 1982. “I’m really attached to it. It has tremendous historic significance to Mahoning County.” 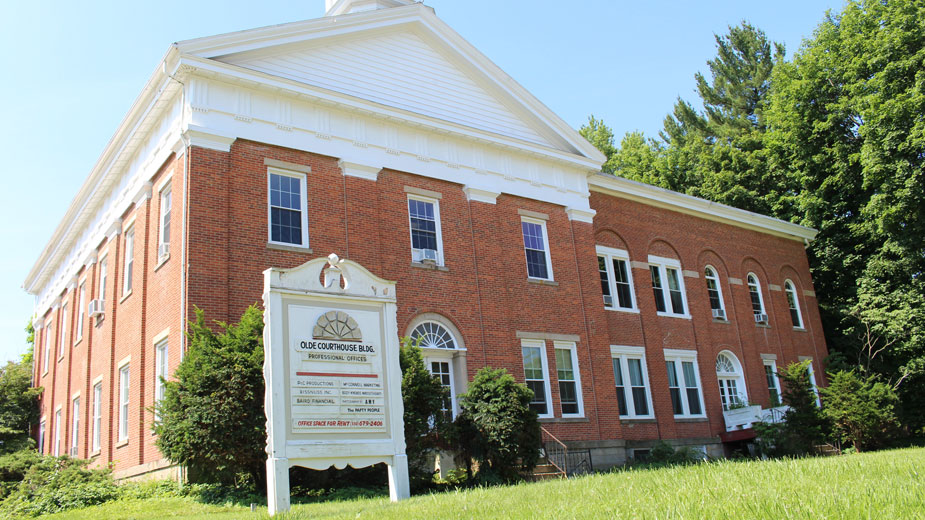 Plenty of the Olde Courthouse Building’s original features can still be seen, including exterior brickwork, a 48-inch-thick limestone foundation and wooden beams in the belltower.

Newton, a wealthy landowner, not only in the Mahoning Valley but also in Indiana, donated the land south of the green in order to provide an adequate lot to build the new courthouse. Then, in 1876, the city of Youngstown won its long-standing challenge to secure the county seat, despite legal maneuvers to keep the designation in Canfield. Future president James A. Garfield argued unsuccessfully before the U.S. Supreme Court on behalf of Canfield, but the court ruled in favor of Youngstown, at the time an emerging industrial and railroad hub of northeastern Ohio.

Still, the courthouse building has served in many other capacities since, Costarella says. Not long after the county seat was moved to Youngstown, the building housed the Northeast Ohio Normal College – that is, a training school for teachers – between 1882 to 1915. In the following years, the building was used mostly for office space that served physicians and law practices – and, ironically until the early 1990s – housed Mahoning County Court #5 on the building’s second floor.

Indeed, Costarella’s impetus for purchasing the building more than 35 years ago was to serve as a tax write-off, he chuckles. “I really wanted to see if I could start an internal medicine office here,” he says. However, he opted to spend his career in the emergency rooms instead of private practice and continued to lease space in the building.

There are reminders of the building’s history everywhere. A panoramic photograph of a Normal School graduating class dating from the late 19th century adorns one hallway, while framed local newspapers from the era present a flavor of what life was like more than a century ago.

And there is plenty of physical evidence of the original building – ranging from the outside brick to the 48-inch-thick limestone foundation walls in the basement of the old courthouse. As one moves upstairs to the bell tower, exposed original beams hand-hewn from trees that were then 300 years old accent the craftsmanship used to construct the building. “There’s probably wood that is 500 years old up there,” Costarella says.

Elsewhere throughout the building, drop ceilings have been removed in order to reveal the original tin.

“We’ve painted and renovated parts of the ceiling,” he says, pointing to a second-floor area that once served as a ballroom and meeting all. 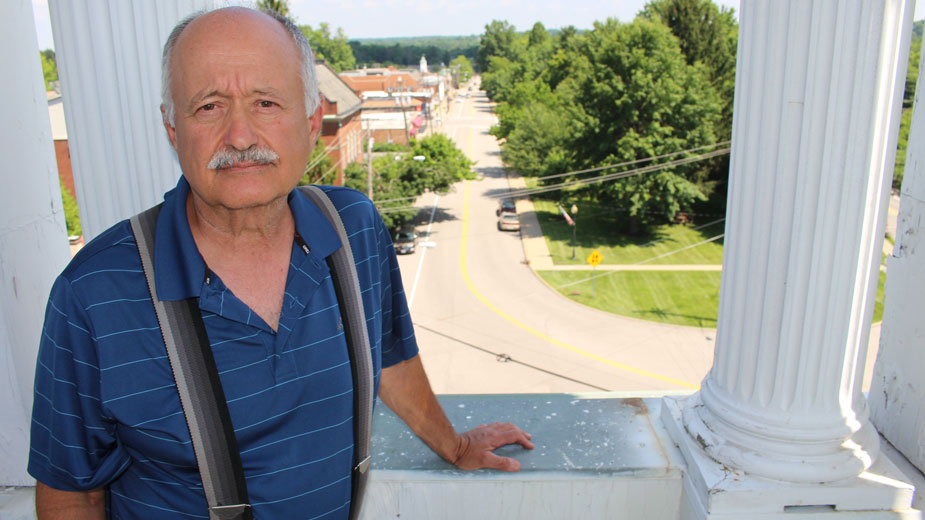 Another curiosity within the building is that each floor hallway contains a large security safe, not unlike ones used at a bank. “There was an engineering firm that worked out of here during the Second World War,” Costarella says. During the war years, the firm was commissioned by the United States Army to design and develop artillery shell casings that would reduce the risk of misfiring and exploding at the point of loading and discharge.

“They designed seamless artillery shells and the designs were kept locked in these safes for security during the war,” Costarella says. The safe rooms are used for storage now.

The third floor of the old courthouse has been remodeled into part office and part living space, replete with a bathroom, shower and kitchen. A tall stepladder in the center of the building leads to the belfry, where the original bell first ascribed to the courthouse still hangs.

According to a Mahoning Dispatch account dated Nov. 3, 1922, the bell was removed from the courthouse on Oct. 30 of that year, after the tower was declared unsafe for use. However, the bell – purchased in Pittsburgh in 1847 – was preserved and in 1975 was returned, along with a newly built cupola that commands the top of the building.

“Maintenance on this tower is very expensive,” Costarella says as he gazes over the city’s green below. “It’s probably the biggest challenge in this building because it’s so high.”

He has recently spoken with members of Canfield’s City Council about replacing the U.S. flag that flies atop the bell tower. “It’s going to be very difficult.”

Several tenants lease office space in the landmark building, Costarella says, including a massotherapist, a photography studio, a timber business, a marketing firm, and an engineered products distribution company.

“We’ve been here about 12 years now,” says Megan Magnetta, co-owner of McConnell Marketing, which has renovated offices on the second floor where the Canfield court once operated. The judge’s bench is still intact and integrated into the office décor and workspace.

“I’m sitting where the judge used to sit,” she says with a laugh. The jury, she notes, would have been seated to her right.

“It’s a great old building,” adds Mandi Young, who is a manager at Bissnuss Inc., a company that is a manufacturer’s representative for products and equipment used in the water and wastewater treatment industry. The company, which is based in the Canfield office, has locations in Cincinnati, Westlake, Pittsburgh and Charleston, West Virginia.

“The company started in this building in 1983,” Young adds.

Oh, and she thinks the place might be haunted.

“Adam [Costarella] had these heavy green-paneled curtains down the hall,” Young recalls. One afternoon, one of the panels over the window mysteriously and inexplicably lifted up in the air and then dropped back down. The window was closed, there were no doors open or wind circulating through the building.

“We left that day,” Young says with laughter. “We just shut everything down and went home.”

Ghosts aside, the building represents a piece of history that will likely outlast him, Castarella says. “I’m sure there’s a lot of spirits floating around here,” he says with a grin. “But I’ve never seen one.”