These latest flings include the city’s opposition to developer M.J. Joseph Development Corp.’s request last month that the court issue a summary judgment in the matter. The city on Tuesday also supplied the court with affidavits from three officials supporting its position.

Included among the affidavits is a letter attached as an exhibit from former Youngstown Law Director Martin Hume to M.J. Joseph’s then counsel on the project. The letter indicates that the company’s CEO, Mitchell Joseph, made “unreasonable demands” to the city in March of 2017, including a request for the city to increase its development grant from $1.5 million to $2.1 million.

The depositions are intended to support the city’s claim that it has the legal right to the land used for the project and more than $2.2 million in restitution from the developer.

Attorneys for M.J. Joseph filed a motion in April arguing the city is not entitled to monetary damages, citing there is no binding language in an amended development agreement the parties signed in 2017. Any compensation would be limited to land, the motion asserts.

In it’s latest filing, the city counters that there is no language in the agreement “limiting the city’s right to damages in the event of a material breach” by the developer. Thus, Joseph’s “motion for partial summary judgment should be overruled because it lacks legal or logical merit.”

The city alleges M.J. Joseph breached two agreements signed with the city in 2017 that awarded the developer tax incentives as well as a $1.5 million development grant to facilitate the construction of the Chill-Can complex on the east side.

In return, the developer pledged to build a production plant, bottling operation and a warehouse on 21 acres, creating 237 jobs by August 2021. The campus was to produce the world’s first self-chilling can and conduct research and development on self-chilling technology.

To date, the buildings remain empty and there are no employees at the site. The city is seeking $1.5 million, plus approximately $700,000 in damages to compensate for demolition, acquisition and remediation expenses. The city also seeks possession of the property, though it already owns about 20 parcels on the 21-acre project site around Lane Avenue.

Woodberry, who served as economic development director during negotiations with M.J. Joseph, says in her deposition that the city devoted “substantial funds related to the development of the area,” including expenses associated with planning, demolition, abatement and other costs.

She notes the city committed these funds based on representations that M.J. Joseph would “deliver a completed project with 237 full-time positions.” The developer, she continues, had “not delivered on these promises.”

Problems with the project arose early on, according to Woodberry’s affidavit. Mitchell Joseph, CEO of M.J. Joseph, balked at the idea of providing a performance bond or entering into an escrow agreement to protect the city’s interests in the event of a breach, she states in court documents. The performance bond and escrow account were provisions in the first development agreement signed by the parties, documents say.

Instead, the city later signed a security agreement and amended development contract with Joseph, according to court documents.

Woodberry says to her knowledge, there were no discussions suggesting that the city “would not seek any monetary relief in the event of a breach of the contract,” according to her deposition.

Law Director Limbian, in his affidavit, submitted a letter from former Youngstown Law Director Martin Hume dated March 28, 2017, to Brian Duncan, then the attorney representing M.J. Joseph and Mitchell Joseph during the negotiations.

The letter was in response to Joseph’s refusal to agree to a performance bond or escrow account, thus constituting a breach of the original development agreement, according to the document.

Hume’s letter states that Joseph had threatened to terminate the project and wanted the city to increase its grant funding to $2.1 million – a request the city refused, according to documents.

Hume stated that the city had the option to reacquire the property, a remedy that is “in addition to, and not a limitation of, the damages that the city may seek if we do not resolve the issues between the parties.”

An amended and restated development agreement was signed in July 2017.

Limbian’s deposition says that Hume’s letter makes clear that the city understood that it was entitled to seek additional damages other than recouping land.

As of last fall, the three buildings at the site remained incomplete and the grounds were “poorly maintained,” while other parts of the site were “covered with refuse,” states an affidavit submitted by Rossetti, the city’s code enforcement inspector.

Rossetti says in his deposition that he inspected the site on Oct. 4. 2021.

“Of the three structures on the grounds, only one of them has a floor and some minimal furnishings,” the affidavit states. “To my knowledge, there has never been a Certificate of Occupancy for the building and it is not finished as some work remains. The other two structures are mere shells with no flooring whatsoever. There is also minimal to no utilities,” the deposition says.

Rossetti included as exhibits dozens of photographs taken during his visit to the site.

In March 2021, the city informed Joseph that his company was in default of the development and enterprise zone agreements. The city warned the CEO that it would take action against the developer if it did not make good on its promises within 60 days.

In May 2021, Attorney Brian Kopp, currently the counsel for M.J. Joseph, struck first and sued the city alleging it did not have the legal standing to reclaim the land or collect money from his client. The city countersued the following month asking the court to award damages, alleging breach of contract.

Kopp has previously stated that Joseph has spent more than $4 million of his own money on the project and ongoing litigation, plus the COVID-19 pandemic has prevented the initiative to move forward. 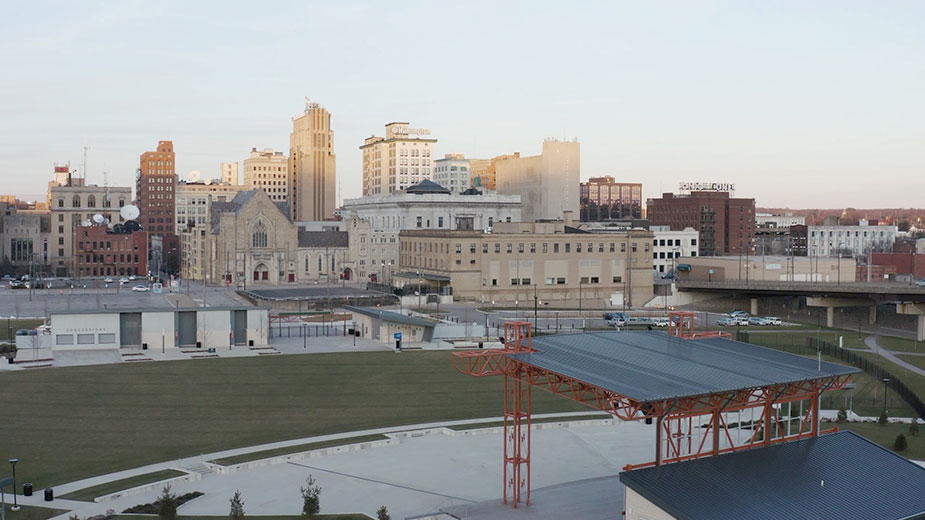