YOUNGSTOWN, Ohio – A word of advice from the Kovach family to fellow business owners: If someone calls claiming to be from the White House, don’t hang up.

Once her apprehensions were addressed, a whirlwind of activity and logistics ensued, culminating Monday in the display of one of CMT’s products at the second annual Made in America Product Showcase at the White House.

CMT was asked to send pictures and a description of the product they would bring, as well as supply the White House with the names and Social Security numbers of the two representatives who would be attending.

After a background check was complete, the company’s CEO, Mike Kovach, and his son, vice president of engineering Chip Kovach, were officially invited to the White House.

They arrived Sunday to drop off the 3,300-pound, 47-inch deep aluminum scrap handler industrial lifting magnet displayed during the event.

“Probably about six members of Secret Service fully go through your truck. They look under the hood. They use bomb-sniffing dogs,” said Chip Kovach.

The magnet is manufactured at CMT’s lifting magnet division on Andrews Avenue in Youngstown, and is used primarily in the scrap industry.

Other products showcased at the event included the Orion space capsule, a jet fighter, as well as clothing and gingerbread houses.

“We were setting up and Chip says, ‘I just saw the light go on in the Oval Office.’ We looked and you could see people in suits,” Mike Kovach said. 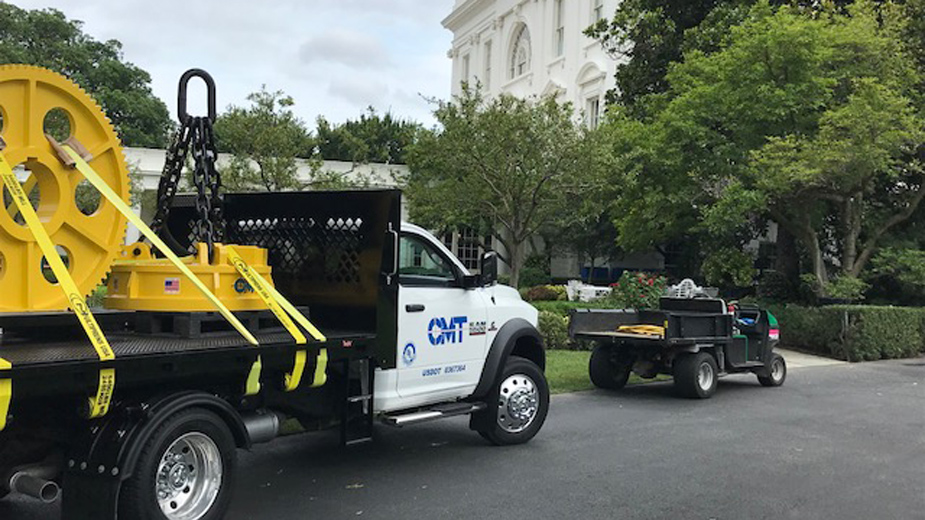 It was the second time the Trump Administration has held a “Made in America” event, in which one company from each of the 50 states is selected by a group of State Department employees.

“A lot of them asked about steel tariffs,” said Mike Kovach.

“We said, ‘Listen: domestic steel producers love it, but we’ve got to find a happy medium here to help out our customers like NLMK  because they’re Russian-owned and they bring in raw material and finish here. So they shouldn’t be penalized on the same rate as bringing the whole product in,’ ” Kovach said he told the officials.

Kovach says he was assured the administration was working to find such a solution.

Still, Kovach says the tariffs haven’t had a negative impact on his company. In fact, business is booming.

“Customers that we heard very little from in the last five years, where maybe we’d see one order a month, now it’s six or seven orders,” he said.

City Machine Technologies manufactures and rebuilds electromagnets for steel mills and scrap yards, and provides electrical, mechanical, machining and field services to industrial and commercial companies throughout the United States.

Kovach says the company is looking to hire between 15 to 20 employees to add to its workforce of about 60. The workers CMT is seeking are welders, machinists, and mechanics.

The Kovaches attribute the recent rise in business to a renewed interest in American-made products, the recent tax cuts, and the Trump Administration loosening of regulations.

“When you’re a small business there’s only so many minutes in the day. It’s really hard to handle all the regulations,” said Claudia Kovach.

During the event, Mike and Chip also met with Vice President Mike Pence, who “asked about the business and the employees,” said Mike Kovach.

Pence also signed the CMT banner and accepted as a gift a desktop paperweight modeled after one of CMT’s magnets. 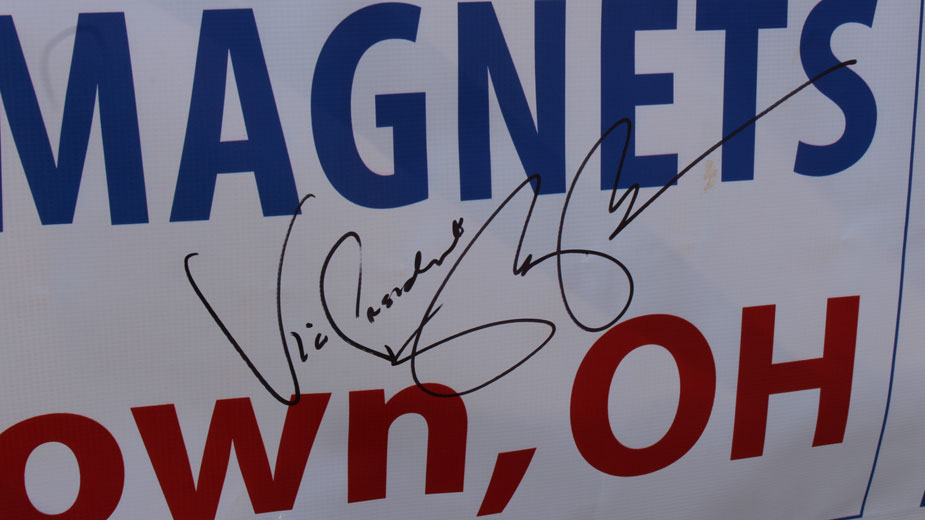 When the showcase ended, the two were among a few guests who got to meet with President Donald Trump for a few minutes.

“He wanted to know a little bit about the company and what we do,” Mike Kovach said. “He was engaged, definitely.”

Trump visited each of the displays before addressing the guests in the East Room.

“All of these products have something special, a big beautiful seal that says ‘Made in the USA,” he told the audience. “After many years of decline, American manufacturing is coming back bigger and better and stronger than ever before.”

Trump pointed to the unemployment rate, which rose to 4% in June from an 18-year low of 3.8%, and a recent poll from the National Association of Manufacturers that found 95% of American manufacturers are optimistic about the future.

“Car plants are moving back into our country at numbers that soon will be records like we’ve never set before. The more we make things in America, the stronger America becomes,” the president said.

For Mike Kovach, the opportunity to represent the city of Youngstown and the state of Ohio at the White House was like “the Fourth of July and Labor Day rolled into one,” he said.

He and his family plan to put the autographed banner in their lunchroom for now, but the magnet, he says, they plan to sell to the right buyer.

“We have to probe the buyer and ask them a few questions,” he said.

“We’re going to call it the Trump Magnet.”

Pictured at top: City Machine Technologies CEO Mike Kovach represented the company at The White House’s Made in America Product Showcase July 23. Joining him was his son and CMT vice president of engineering Chip Kovach.

WARREN, Ohio – The region has seen a sharp rise in business travelers because of the growth of Foxconn, Ultium Cell, Vallourec and other large corporations here. But these travelers – who often stay for extended periods – face an…

Mercy Health Says It is Working to Renew Contract With Cigna

CINCINNATI, Ohio – Mercy Health said today it is working to reach an agreement with Cigna to renew a contract for employer sponsored plans for 2023. If the contract ends Jan. 1 without a new agreement being reached, Mercy Health…