YOUNGSTOWN, Ohio – The city has asked a court to order the developer of the Chill-Can project to deliver documents and information related to the status of specific equipment that the city says is covered under a security agreement the parties signed in 2017.

The motions were prompted by a Business Journal story published in October that reported the developer’s parent company – Joseph Co. International – had sold its building in California for $5.4 million in August 2021, according to the attorney representing the city.

“When we learned the building had been sold, that caused us concern,” said Thomas Hull II of Manchester, Newman and Bennett, the law firm representing the city in its legal case against M.J. Joseph Development Corp., the Chill-Can’s developer.

The equipment at the time was housed at parent company Joseph Co. International’s plant at 1711 Langley Ave. in Irvine, Calif.

Now, the city wants information as to whether the equipment is still there, has been sold or has been removed from the premises, Hull said.

Motions filed in Mahoning County Common Pleas Court on Jan. 18 show the city wants the court to compel M.J. Joseph Development Corp. and a related company, Joseph Manufacturing Inc., to produce documents identifying the whereabouts or status of pieces of equipment that the companies put up as collateral when the project started almost six years ago.

M.J. Joseph Development and Joseph Manufacturing signed a security agreement in 2017 that put up equipment valued at no more than $1 million as collateral to protect the city’s position in the Chill-Can project.

The security agreement was signed in place of a traditional performance bond. A performance bond is a financial guarantee from one party ensuring it will meet the obligations of a contract signed with another party.

In 2016, Mitchell Joseph, CEO of M.J. Joseph Development and its related companies, announced he would build a $20 million campus on the city’s East Side to produce self-chilling cans and pursue new research and development ventures. The project pledged to create 237 jobs.

As part of the development package, the city awarded the developer a $1.5 million grant to prepare the site under the condition the company complete the project and create the jobs.

So far, just three empty buildings sit at the site, and the company’s latest report to the city shows the project had created just one job.

Anticipating that the city would take legal action, M.J. Joseph filed a complaint against the city in April 2021 asking the court to rule that it was not entitled to any monetary compensation. The city countersued, asking the court to grant it restitution for the $1.5 million and award it other damages.

In November, Judge Maureen Sweeney found that M.J. Joseph was in breach of contract and ordered the company to repay the city the $1.5 million. Additional damages were not considered in her ruling.

The city, in its complaint against M.J. Joseph, is also seeking additional damages, including $414,948 in property acquisition and relocation costs, and another $318,523 in demolition and abatement expenses.

The city also claims it has been damaged by the loss of income tax revenue based on the project’s promised payroll of $8 million. The city estimates this loss at $575,000.

The latest round of document requests are related to the whereabouts or status of the equipment in California, court papers show. This equipment includes conveyors, assembly presses, a milling and drilling machine, air compressors and other machinery used to produce the company’s “chill-can” and other beverage products in California, according to court documents.

“We’d like to find out where it is, or did they sell it?” Hull queries. “What happened to it? These are the questions we’d like to ask.”

Hull says that were the equipment sold, then the city would be entitled to any proceeds of the sale.

According to court papers, the city issued its latest discovery requests Nov. 23, 2022, just two days after Judge Sweeney’s ruling. As of Jan. 18, the Joseph companies had not responded to the city’s requests, court papers say.

Attached to the requests are exhibits containing emails in November between Hull and M.J. Joseph’s attorney, Brian Kopp.

In an email dated Nov. 23, 2022, Hull asks Kopp to check with his client as to whether the equipment was still stored on the Langley Avenue property. “I don’t want to jump to conclusions, but it is our concern that your client has transferred and/or disposed of the assets that are the subject of the security agreement in violation of the terms of the security agreement,” Hull writes.

Kopp’s reply that same day states that the city’s attorney bypassed some procedural steps, noting that there is no final judgment in the case, referring to Judge Sweeney’s November ruling.

“As you may suspect, we intend to appeal the decision when appropriate,” Kopp replied.

Also, Kopp said “the city had failed to properly perfect any liens and all dollars that might be owed in the future will be subordinate to any construction loans. This is specifically set forth in the documents your firm prepared and negotiated on behalf of the city.”

Kopp stated the legal team would be raising these issues and others “in the future as the court’s order does not address these matters.”

A separate filing on Jan. 18 by the city requests the court hear the case on additional damages and injunctive relief through the bench instead of a jury trial. 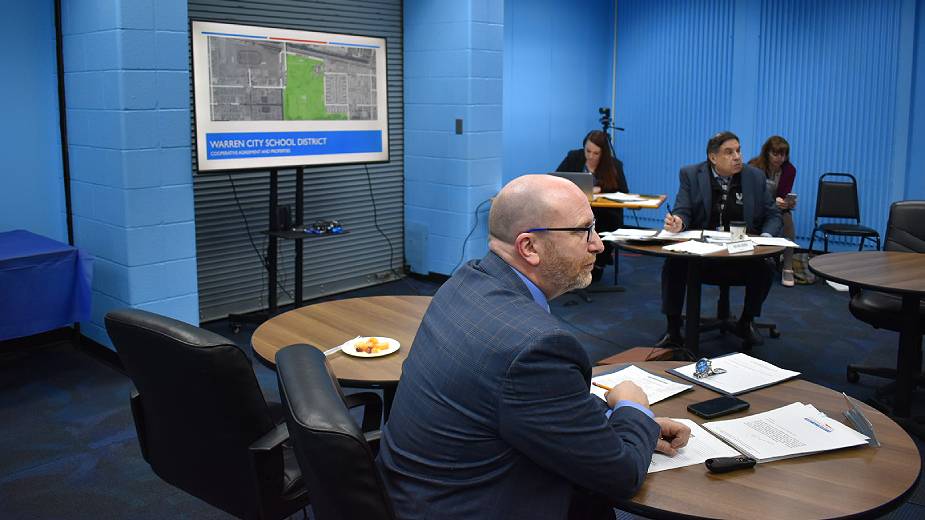 VIENNA TOWNSHIP, Ohio – The Western Reserve Port Authority is assembling property just west of downtown Warren on behalf of a potential developer. WRPA’s board of directors voted Wednesday morning on several agreements to accept a total of just over…