YOUNGSTOWN, Ohio – Youngstown CityScape urged downtown stakeholders and the broader community to “Spruce Up Youngstown” at its annual Streetscape planting and cleanup event.

This year’s Streetscape is scheduled for June 1. CityScape held the kickoff breakfast for the 2019 Streetscape campaign Friday morning at the Central Branch of the YMCA.

The kickoff breakfast “is one of the first signs of spring,” said Sharon Letson, CityScape executive director. That statement came as she acknowledged the day’s cold weather with snow in the forecast – “a classic March morning in Ohio,” as she joked.

“For 22 years, CityScape has been working steadily to imagine, develop and complete projects that beautify our surroundings and create a sense of pride in our center city and in our downtown public greenspaces,” Letson continued.

CityScape focuses on “little things” that “add up to big changes,” such as newly planted trees downtown, signs for downtown walking tours, cigarette collection containers and improvements at Wick Park, she added.

Given Youngstown’s financial constraints, the city cannot “make downtown Youngstown and the surrounding neighborhoods look the way they do,” said First Ward Councilman Julius Oliver. When it comes to the aesthetics and restoration of downtown Youngstown, CityScape is “a great partner,” he said.

This year’s theme is a nod to the popup store that Spruce Home Décor & Gift Store, based in Niles, operated during the 2018 holiday season, Letson said.

“We renjoyed having them downtown,” Letson said. “They sold our discount card, they had a day when a percentage of the proceeds went to the lights in downtown Youngstown that we put up.”

CityScape is adding a new wrinkle to Streetscape with online registration for the event as well as the ability to make donations online, reported Phil Kidd, CityScape’s associate director. 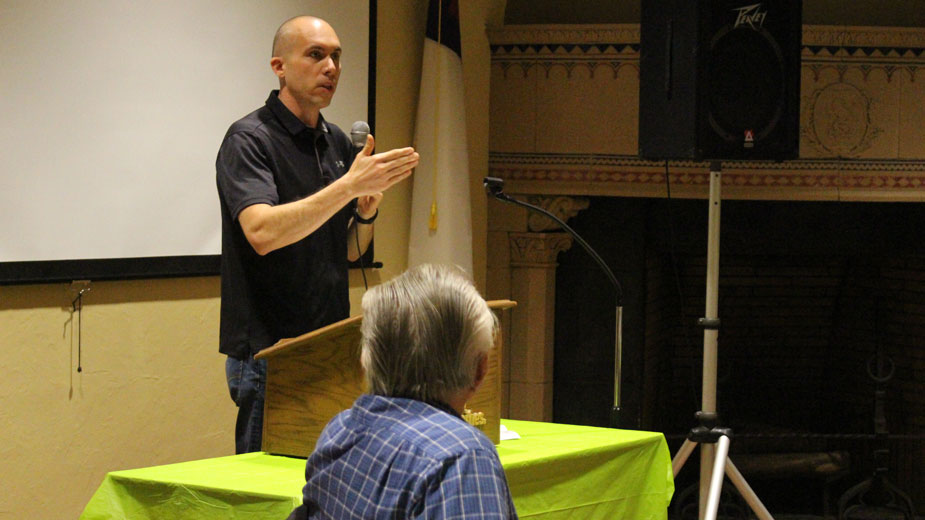 Kidd provided a rundown of current and upcoming initiatives.

CityScape’s Downtown Youngstown Partnership wrote and secured a grant for 20 redbud trees planted on Walnut and Commerce streets, partnered with the Mahoning County Land Bank to plant 60 evergreen trees from downtown planters to a vacant lot, and partnered with the city to purchase about 40 trash cans for the district, he said.

CityScape, through its partnerships in the community, also is moving forward on a new site for the proposed relocation of Welsh Congregational Church. Although not prepared to make any announcements today, Kidd advised the audience to look for more on that front.

In addition, in partnership with the city, plans are being made for a food truck festival, tentatively set for Aug. 24, in Festival Alley near the new Youngstown Foundation Amphitheater

Another new project CityScape is looking at is Youngstown in a Box, which would feature a selection of items from the Mahoning Valley that could be shipped outside the area or purchased locally. CityScape is working on that with Youngstown State University’s Center for Nonprofit Leadership, he said.

Kidd, who is leaving Youngstown at the end of the month to accept a job in Cleveland, received a standing ovation when he was called to the podium.

“He was defending Youngstown before it was the sexy thing to do,” said Pete Asimakopoulos, president of CityScape’s board of directors, in reference to the “Defend Youngstown” campaign Kidd launched.

Letson said she hired Kidd because he thinks differently than she does. “He has a young imagination and determination that I don’t have,” she said. “No question in my mind. I am going to miss my coworker. … He’s given a lot to our community and I expect him to give a lot to his next community.”

The Pittsburgh native said he considers Youngstown home, having spent the majority of his adult life here. “My work here has really been my passion, a lot of that because of the relationships I have with the people in this room,” he said. He also said he hopes to bring the knowledge he gains in Cleveland back here.

Suzanne Barbati, executive director of Oh Wow! The Roger & Gloria Jones Children’s Center for Science & Technology, presented a $1,100 check on behalf of herself and her husband to Letson to support CityScape’s new Downtown Difference Makers initiative.

“The more attractive the downtown, the more visitors we will get,” Barbati said.