YOUNGSTOWN, Ohio – For 14 years, pre-K students in Mercer County have spent their summers in the local United Way’s Success By 6 enrichment program.

Dozens come through the program each summer, but now the community is seeing the long-term effects, when one of the top students in Mercer Area School District’s class of 2018 was among the first students in Success By 6.

“That’s a kid who was way behind going into kindergarten. Who knows what could have happened? He could have gotten dejected and fallen further and further behind,” says Eric Brown, chief financial officer of Synergy Comp and Gilbert’s Risk Solutions in Sharon, Pennsylvania. “I think that proves this program works.”

Synergy Comp is a longtime supporter of the Mercer County United Way, last year providing $55,000 to fund the program in the school district through its company foundation.

Throughout the five-county region, companies like Synergy Comp are crucial to the six local United Way chapters as they provide not only financial support through workplace campaigns and corporate gifts but also volunteer support.

“The older model was we were a fundraiser. If you wanted to directly volunteer, one of the few options was a board seat. If you called, we’d send you to Second Harvest or the YMCA or Salvation Army,” says Bob Hannon, president of United Way of Youngstown and the Mahoning Valley. “With the impact model, volunteers are essential.”

This Youngstown chapter’s Day of Caring, scheduled for Sept. 7, is expected to bring out more than 800 volunteers to the community cleanup day that also serves as the kickoff for the agency’s annual campaign. In Trumbull County, that chapter’s United Way at Work brought out more than 200 supporters last year.

“That was a big increase over the year before and over the history of the event. We’re really pleased with the number of people who come out,” says Christine Cope, United Way of Trumbull County director of resource development. “It’s important to get everyone together so they understand the mission.”

St. Joseph Warren Hospital has about 25 employees slated to participate in this year’s cleanup day, set for Aug. 24. Workers are energetic about getting involved says Steven Pavlak, manager of respiratory care and sleep center services at the hospital and a United Way at Work team leader.

“Nothing feeds your soul more than when a family comes outside and cries because of what we’re doing,” he says. “We always kick ourselves for not doing before-and-after pictures because the change is so dramatic. It feeds the soul.”

For the directors of local United Way chapters, the support from all sectors of business – from retail to manufacturers to banks and everything in between – is a positive sign for the community.

“A lot of companies have a philosophy that their business is supported by the community and they have an obligation to give back,” says Stacia Erdos, vice president of strategic planning for the Youngstown United Way. “That’s passed on to employees. They want their employees giving back, whether it’s through donations or volunteering.” 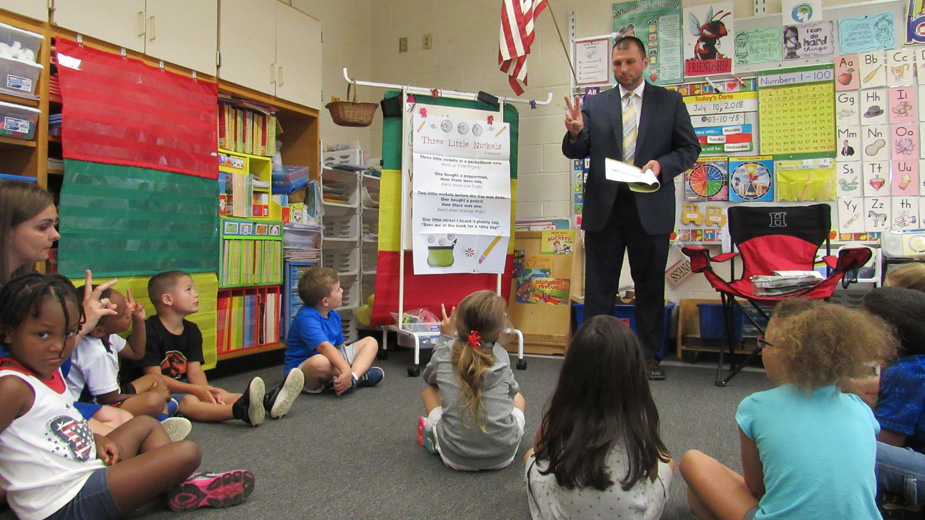 Pictured: Thomas DeToro, associate resident director of the Hermitage office of Merrill Lynch, volunteers his time to teach basics of finance to pre-kindergarten children at Artman Elementary through the United Way of Mercer County’s Success By 6 summer program.

On the other side of that perspective, adds First Energy spokesman Chris Eck, is the corporate philosophy of improving communities where businesses operate. First Energy, through its foundation, is one of the largest supporters of the United Way of Lawrence County in Pennsylvania.

“The under- lying principle is to improve the quality of life where we work, where our employees live and work,” Eck says. “What’s better for the community is better for our business and other businesses, as well. If you can improve the standard of living, you create a more vibrant community that leads to more economic development.”

Outside of providing volunteers, St. Joseph Hospital also hosts a workplace campaign, which last year raised about $8,000 for United Way. Other fundraisers are held throughout the year, including a pumpkin decorating contest and raffle, where visitors can buy tickets with proceeds going to the Trumbull United Way.

“It raised around $800 last year,” says Kathy Cook, president of St. Joseph Hospital. “It’s not huge dollars, but it’s around the time we do our campaign for the United Way, so it ties in. We get the banner up, the name gets out and [Trumbull United Way President Ginny Pasha] and the team come to sell tickets.”

Elsewhere in Trumbull County, 7 17 Credit Union hosts fundraisers like Denim Days – employees can pay to wear jeans on Fridays – and raffles. Between those and the workplace campaign, the credit union raised about $29,000 for United Way in 2017.

“We’ve been hit hard economically. The folks in the Valley are resilient but there have been challenges and people are still struggling,” says Eric Lanham, 7 17’s vice president of marketing. “The United Way provides opportunities for folks from all walks of life to be able to pool resources. It creates an opportunity for a greater good rather than small, one-off fundraisers.”

Before coming to the credit union, Lanham was Trumbull United Way’s communications director and is currently a board member. During the workplace campaign, he says, employees are invited to share stories of how United Way has impacted their friends and family.

“That gives you the opportunity to see firsthand that these are real people being impacted. Over the years, I’ve had grandparents served by Mobile Meals or family involved in scouting,” Lanham says of his own experiences. “I lived in Niles when the tornado came through in ’85. My grandmother was with Red Cross and I saw all they did in the aftermath.”

Those types of stories are crucial to generating support, Hannon and Pasha agree.

If an employee’s only experience with the United Way is when representatives come in to ask for donations, Hannon says, then the agency has failed.

“The average donor doesn’t really care how much money we raise. They care about what we do,” Pasha says. “What we’re focusing on is how we can best serve the community and that means meeting donors’ expectations.”