YOUNGSTOWN, Ohio — Dakota Murphy, a special needs student enrolled in the Mahoning County Educational Service Center’s Transition to Work program, concentrates as he arranges components that he’ll place in a small plastic package, which will then be shipped to a client somewhere across the country.

Across the table other students from the program are doing the same, preparing not just packages, but for their future after they leave school.

“We sat down and came up with a plan that allowed these young people to come into our facility so we can work alongside them and teach them job skills,” said Sam Orr, operations manager at JJL Packaging Inc. “The best part of it is that we’ve been able to employ some of those kids once they’ve graduated school.”

JJL has hired four employees with special needs thus far and the goal is to add one or two more each year once they graduate, Orr said.

“It’s wonderful to have them join our team,” he said. “That’s where we take our greatest pride.”

JJL – a packaging company for large customers such as General Motors Co., Moen, Delphi and Stanley, among others – relocated to Youngstown from Webb Road in Austintown last year.

In all, JJL employs 21 and on Wednesday hosted a ribbon-cutting ceremony sponsored by the Youngstown/Warren Regional Chamber at its new facility at 360 E. Federal St. near downtown.

Orr said the real reason for the event was to celebrate a work program that teaches young people with developmental challenges important work skills they can use on the job or at home.

On this day, about 15 students are working in a room sorting components that are packaged together and prepared for shipment to the customer. Some of the higher functioning students are often used on the company’s distribution floor.

“When we first started, we only had 10 or 12 coming through,” he said. Today, more than 100 students a week come through the company the program, Orr noted. “It’s important to us that we provide them with the opportunity to get meaningful employment.”

In this case, the components are packaged and incorporated into a larger kit that would be used to install a lavatory on a wall in a commercial building or stadium.

Alan Gonci, transition and work-study coordinator at Mahoning County ESC, said the transition to work program is in its seventh year and growing. The initiative also works closely with other programs sponsored by home school districts.

“It’s a stepping stone to getting into the world of work,” Gonci said. “They’re working on developing job skills that they’re going to need when they transition from school to adulthood.”

Disciplines such as working with others in a team, quality control, taking directions from others, stamina and eye-hand coordination are all skills students learn while performing work at JJL and other corporate partners, Gonci said. 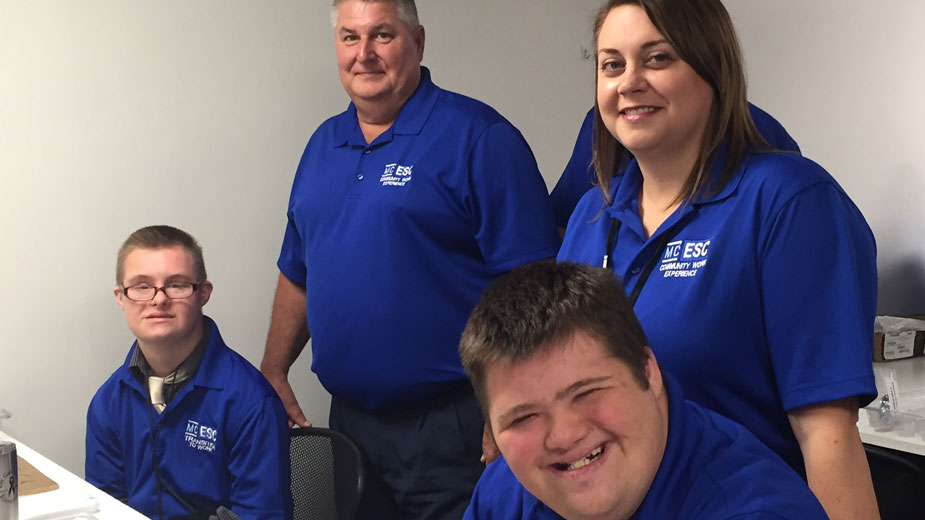 “We work with about 30 employers in the area,” he said.

Company president Joe Landis said JJL is a custom-packaging service that has clients all over the country, most of which are large corporations with multiple locations. When he heard of an empty warehousing facility that was available on East Federal Street, he jumped at the opportunity to return to Youngstown.

“The facility was right, and I saw a lot of good things that Youngstown was doing in the city,” he said.

During the 1980s, Landis operated Paragon Industries on Albert Street until 2005, when the company was forced to downsize in the wake of the bankruptcy of Delphi Corp. “My customers stayed with me,” he said.

Orr said the move allowed the company to expand its square footage and hire several more people over the last year. “We do everything from bulk packaging to specialized kitting,” he said. “We do kits for cell phone towers, plumbing companies – a wide variety of things.”