Consistency Is King for 2018 YSU Penguins

YOUNGSTOWN, Ohio – If there’s one thing that will determine the success of the 2018 Youngstown State University Penguins football team, it’s consistency. Head coach Bo Pelini has made that abundantly clear.

When it comes to the results of the mini-scrimmages held throughout the daily practices, “The competition’s been good, but our level of consistency isn’t where it needs to be,” he says. “There are too many mental errors.”

On what the defensive unit needs to work on: “A lack of consistency, right now. Potentially, it’s a good group.”

And, during the battle between Nathan Mays and Montgomery VanGorder for the starting quarterback job, Pelini was looking for “the guy who’s the most consistent.” VanGorder was eventually named the Penguins’ top QB.

That doesn’t mean the fourth-year head coach is disappointed in this year’s team. He’s seen plenty of bright spots from individuals, but there’s still work to be done as the team approaches its opener Saturday against Butler University. 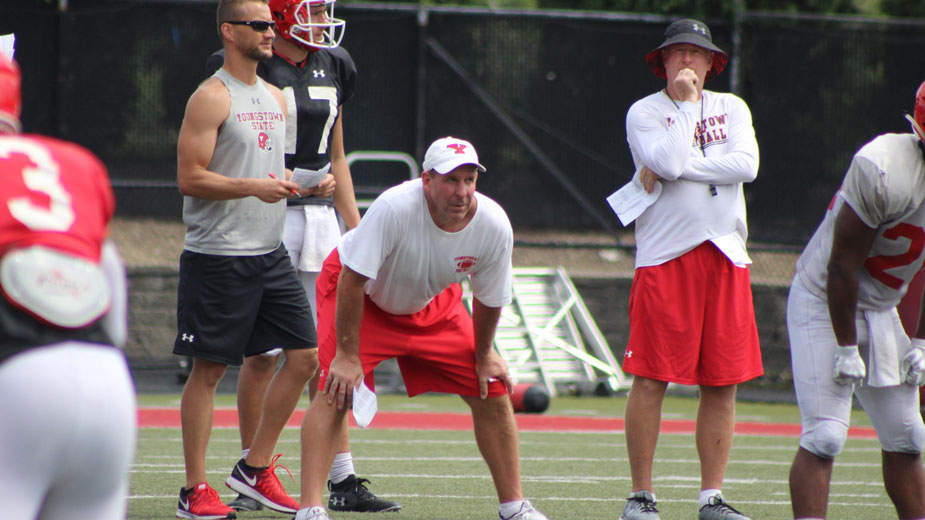 “I see a lot of good things. A lot of guys are getting better. But as units, in all three phases, we’ve got a ways to go,” Pelini says. “It’s a work in progress, to say the least. It takes time every single day and it takes guys committing to getting better.”

With just under 110 players on the training camp roster – thanks to a new rule from the NCAA increasing the limit from 95 – and a new rule allowing players to compete in up to four games while maintaining their redshirt eligibility, August has been a month of evaluation for the Penguins.

There are certainly known entities. Tevin McCaster will get the lion’s share of carries at running back and Savon Smith will help anchor the defensive line, for example. But the new rules are letting the YSU coaches get a better feel for who will see playing time this fall.

“Every kid is in a little different situation. It doesn’t change a lot, but it does give you some options,” says Pelini, who is in the final year of his contract at YSU.

On Aug. 22, Pelini named VanGorder, a graduate transfer from the University of Notre Dame who spent four years with the Fighting Irish, primarily as the holder on kicks the last two seasons, as the Penguins’ starting quarterback. Serving as backup will be Mays,  a junior who played in eight games for the Penguins last year and started five.

“Being quarterback isn’t about trying to win the game by yourself. More importantly, he doesn’t lose games for you,” Pelini says of  the decision. “He’s more efficient in what we’re asking him to do: run the team, be a leader, go through his reads.”

VanGorder will have plenty tools all around him. At running back is returning starter McCaster – named to the Walter Payton Award watch list for best FCS running back, a Hero Sports first-team all-American and voted to Missouri Valley Football Conference preseason first team – along with Christian Turner and a bevy of other runners. In total, the roster lists nine running backs.

“They’re out there flying around and working hard. They push me,” McCaster says.“For the guys coming up beneath me, I want to keep that legacy and tradition going. I want to show them how it’s done and they’re picking it up really, really well.” 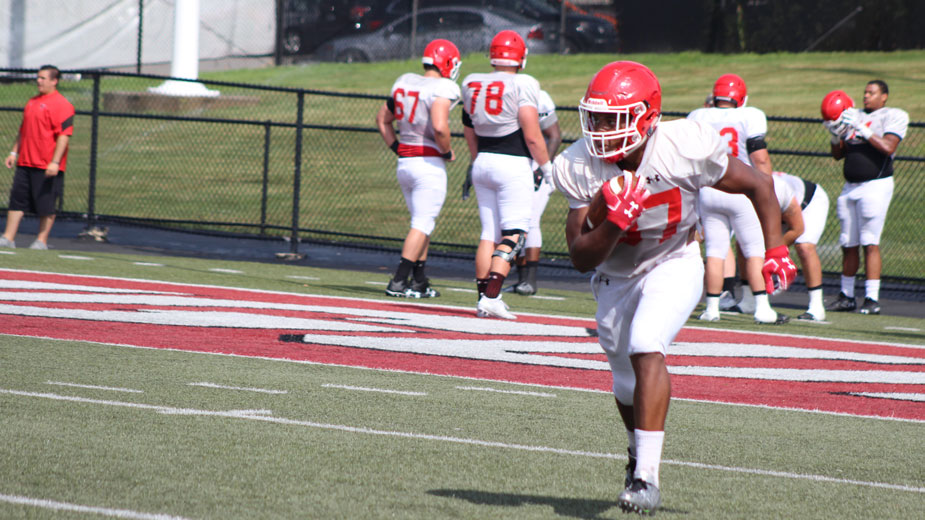 For passing targets, the chosen QB will have returning wide receivers such as Samuel St. Surin and Jeremiah Braswell, along with transfer LaQuan White, who had 23 catches for 283 years and three touchdowns last year at Erie Community College.

“Our receiving corps is going to be good this year. We’ve got a lot of guys coming back and some transfers coming in. And I like our running backs,” observes defensive lineman Savon Smith. “We should have a lot of big plays downfield. There’ll be some big things on offense.”

Adds center Vitas Hrynkiewicz: “Any one who steps up to get the ball, we expect great things from them. For anyone behind us, if we give them time, we’ll have a successful year.”

Hrynkiewicz was named to the first team of the preseason all-MVFC team and a second-team Hero Sports all-American. With him in the middle, the Penguins’ offensive line seems as solid as ever.

“We’re experienced in the middle. We’ve got Gavin Wiggins on the outside and he’s one of the best players on the team, if not the country,” the center says. “Between me, Gavin, [Jacob Zinni and Connor Sharp], we can set the tone and show how physical we can be.”

On the defensive side of the ball, Smith and Dellovade have been singing the praises of the unit’s younger players. Both are in their final year at Youngstown State and are confident that the defense will be intimidating after they’ve left. 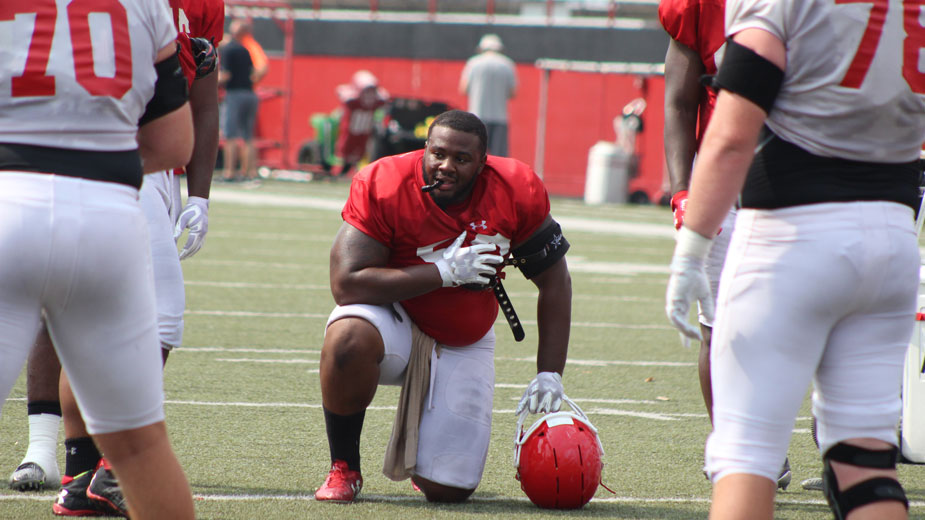 By name, Dellovade notes the contributions of linebackers Cash Mitchell and Terray Bryant, as well as cornerback Bryce Gibson, who was named a second-team all-conference player.

Missing from the field this year, however, will be senior defensive end Justus Reed, who tore his Achilles tendon in a summer workout. A transfer from the University of Florida, Reed played seven games with the Penguins last season, amassing 15 tackles and five sacks, tied for No. 1 on the team.

“You can’t replace a guy like that. He’s a great player, but it’s always next guy up. People are filling his shoes and we’re making progress,” Dellovade says.

The two defensive leaders both note last year’s close losses as a focus of training camp.

Of YSU’s five losses in 2017, four were by seven points or fewer, including overtime losses to North Dakota State and University of Pittsburgh, arguably the two best teams the Penguins faced.

“Those kinds of games come down to attention to detail. When you play in a conference like we do, the difference between winning and losing is this much,” Pelini says, with his thumb and finger an inch apart. “You never know which play is going to make a difference. You can’t afford to have errors – mental errors, fundamental errors. You have to be on point all the time.”

Again: it comes down to consistency.

After the season opener against Butler at Stambaugh Stadium, the Penguins are on the road to play West Virginia University. The night game is the Mountaineers’ first at home this season. Barring an injury, WVU quarterback Will Grier will make things difficult for the Penguins. Grier has been a named by several outlets as a player to watch for this year’s Heisman Trophy and is a Sports Illustrated first-team all-American. The most recent matchup between the two teams was in 2016, a 38-21 Mountaineer win.

As with training camp every year, hope springs eternal.

With last year’s disappointment, this team is fired up,” Hrynkiewicz says. “There were some games we lost in the fourth quarter and lost our way late. That’s not going to be the case this year. We’re emphasizing the finish.”

If they can do it consistently, players and coaches agree, then watch out. 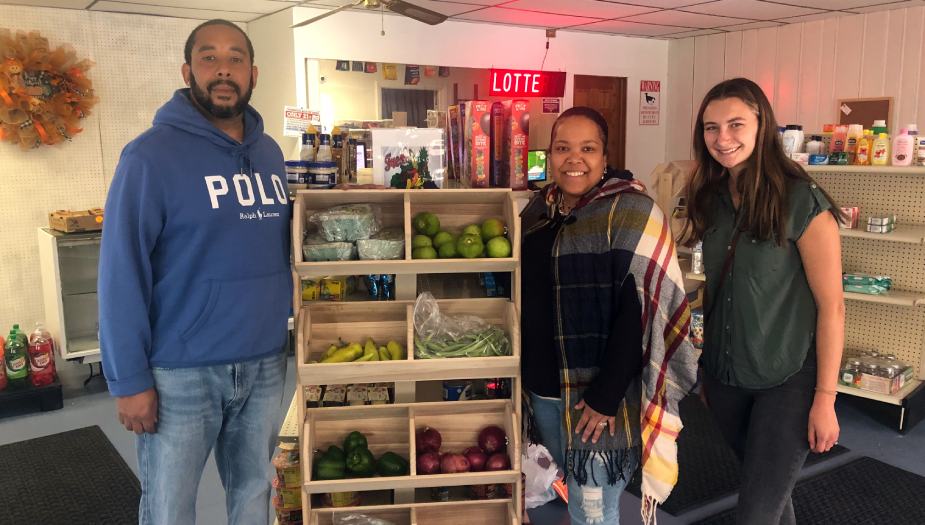