Construction Season Set to Kick Off With Energy, Infrastructure

YOUNGSTOWN, Ohio — Jonathon Pitts carefully measures a long piece of metal pipe and then scans the frame above that will hold plumbing infrastructure for a $6 million senior-living complex under construction here.

“I’ve been doing this for about 17 years,” says Pitts, a member of Local 396 of the Plumbers and Pipefitters union and an employee of Stateline Plumbing in New Middletown. Two floors above, his colleague, Bob Jones, is busy installing flexible water lines in one of the 60 or so rooms planned for this new complex on the northern side of the city.

The Broadway Park senior living apartments, under development by Columbus-based National Church Residences, is just one of several construction projects underway in the region that have kept the trades busy this winter.

Moreover, projects planned for the spring, such as large-scale energy projects, infrastructure development, and expansions in the medical sector, bode for a bustling season for union workers.

“It looks like my local is going to have a great year,” says Rocky DiGennaro, president of the Western Reserve Building and Construction Trades Council and business manager for Local 125 of the Laborers International union. “I’m really optimistic. I think we’re going to have lots of work.” 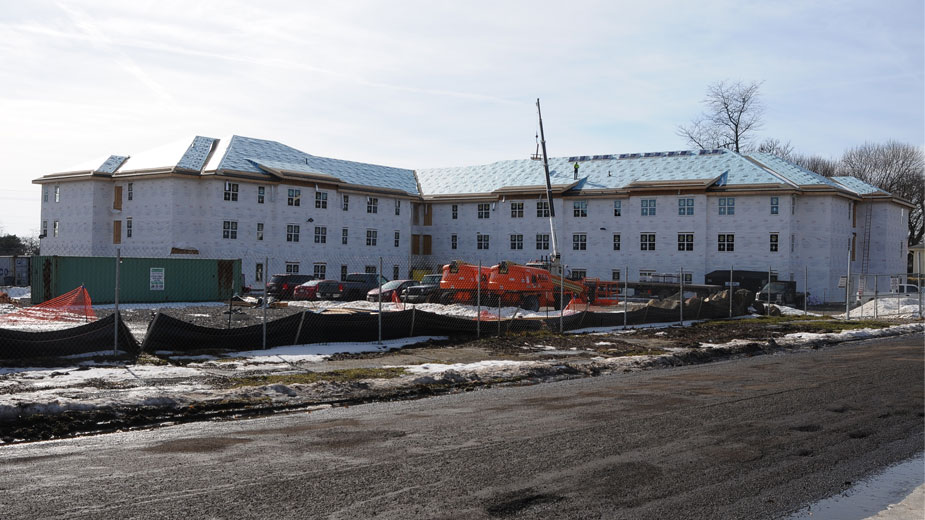 National Church Residences will manage the senior housing complex under construction near Ohio Living Park Vista in Youngstown, and Ohio Living will provide nursing and wellness programs for seniors who occupy the apartments.

Among the more prominent projects expected to begin this construction season is the combined cycle power plant of South Field Energy near Wellsville in Columbiana County, expected to cost $1.1 billion, DiGennaro says. “This should start this month or in March,” he says.

The construction phase of the operation could yield between 500 and 700 jobs for the building trades, DiGennaro says.

Activity outside of the area tied to energy is so robust that other locals simply do not have enough workers to adequately staff some of these jobs, especially pipeline work in the southeastern portion of the state, DiGennaro says. This, he adds, presents opportunities for members of Local 125 to travel to big jobs within a two-hour drive.

Local 809 of the Laborers union in Steubenville, for example, has a considerable amount of pipeline and oil and gas work that requires more manpower that the local can field. “They’re calling, looking for people,” he says.

According to the latest data from the Associated General Contractors of America, the largest percentage of employment gains realized last year by any region in the construction industry occurred in the Steubenville area. The trade group reports that the Weirton, W.Va.–Steubenville metro region saw the addition of 500 jobs in the construction sector during 2018, or a 28% increase compared to the previous year.

Demand remained strong throughout last year, and employment in the construction industry increased in 273 of 358 metro regions across the country, the organization reports. Ken Simonson, chief economist for the association, says other areas of the country would have seen employment gains were it not for the tight labor market.

“There were 278,000 job openings in construction at the end of November, a record for the month,” Simonson says. “It’s likely that more metro areas would have had job gains in December if contractors had been able to find qualified workers.”

Work related to the oil and gas industry is likely to command more labor resources as projects develop this year, DiGennaro says.

The Royal Dutch Shell $6 billion ethane cracker plant in Beaver Township, Pa., is likely to draw building-trades members from across the region to staff that massive project, he says.

“Oil and gas has changed the landscape,” DiGennaro says.

“I’d say the unions have captured about 85% of this business. And that’s conservative,” he says.

Aside from an ever-present amount of work related to oil and gas, major infrastructure projects planned for this year stand to occupy a significant amount of time for the building trades. Among them are turnpike work stretching from the Eastgate exit to the travel plaza and the widening of four bridges.

“These are about $15 million worth of projects,” DiGennaro says. And, in July, improvement work is slated to begin along a stretch of state Route 11 that extends from the Columbiana County line to the Interstate 680 interchange in Mahoning County.

“There’s a lot of good stuff happening in the area,” he says.

It’s a sentiment shared by other leaders of the building trades as the construction season ramps up.

“It’s going to be a busy year,” confirms Tim Callion, business manager for Local 396 of the Plumbers and Pipefitters union in Boardman. “Right now, most of the activity is outside of our jurisdiction, but these areas are having manpower shortages.”

Local 396 has about 450 active members, many of whom are working through the winter months, Callion says.

“We’re holding our own this winter,” he says. “There are several projects where we’ve been able to work through the cold.”

Those who are idle during the winter take advantage of the down time to work on their skills, Callion says.
A handful of journeymen, for example, use the cold months to obtain advanced certifications in welding through classes held at the Local 396 offices and shop in Boardman. Others pick up work from other projects in the region in need of additional tradesmen.

“It’s a little slow right now in the Valley. But it should pick up,” Callion says. “The good thing is that there are projects close enough where we can send people out of town and they can return home every day,” he says.

Other promising economic development ventures bode well for the trades, adds Tony DiTommaso, president of Local 171 of the Carpenters union. “We are hopeful about the TJX project,” he says.

TJX Companies has selected a site in Lordstown along Bailey Road to build a 1.2 million-square-foot distribution center to serve its HomeGoods brand. The project is expected to cost $160 million and employ 1,000 when it operates at full capacity. “We think there’ll be some opportunity there,” DiTommaso says. “They’re entertaining bids from some reputable contractors.”

Also, three Meijer stores are earmarked for development in the Mahoning Valley, DiTommaso adds. While many national chain operations often use their own contracting firms, DiTommaso is confident that Meijer will use signatory contractors that employ local union tradesmen.

“We believe they’ll be good with this,” he says.

Meanwhile, ongoing projects such as new medical clinic for Mercy Health at the Enclave near Youngstown State University, the new Orthopaedic Surgery Center just off Western Reserve Road and upgrade work with Akron Children’s Hospital bring in steady business for the trades as the health-care sector continues to expand.

Business appears strong across all sectors at the moment – retail, energy, medical, commercial and manufacturing, DiTommaso says. “We’re seeing a little bit of everything.” The Carpenters union recently graduated 300 apprentices across Ohio, he notes.

“Our participation is up,” DiTommaso says, noting that Local 171 boasts about 90 apprentices this year, or about 20 members higher than normal levels. “This is good for a small local,” he says.

Still, the fate of the General Motors Co. plant at Lordstown is cause for concern among the building trades, since a union workforce, including Local 171, was regularly used there during periods of renovation and at least one carpenter in the plant now.

“We all support the Drive it Home campaign and hope they continue out there,” he says.