LISBON, Ohio – As he grew up in Lisbon, Pondi’s Restaurant & Bar is where Matt Borza and his family would eat dinner together a couple of nights each week.

“I never really thought I would own it. But I always had a level of comfort here,” Borza says. “Pondi’s was mentioned a lot around the house.”

Borza’s Romanian ancestors, John and Annie Pondi, immigrated to Lisbon in 1914 and bought the house the restaurant operates in today.

John Pondi worked at a pottery across the street and came home on his break to eat what Annie prepared him for lunch.

“Word got out with the other employees about what he was eating for lunch. So people started coming over to have Annie Pondi’s lunch,” Borza says. “They thought it might be a good idea to make it into a restaurant.”

The Pondis moved their residence to the second floor of the building and opened the restaurant and bar downstairs.

“They survived Prohibition by making bathtub gin upstairs,” Borza says with a laugh.

The restaurant has been in the hands of four owners over its 102 years of operation.

Annie and John Pondi owned the restaurant until the 1970s before selling it to their nephew, Nick Muntean, who owned it for three years. 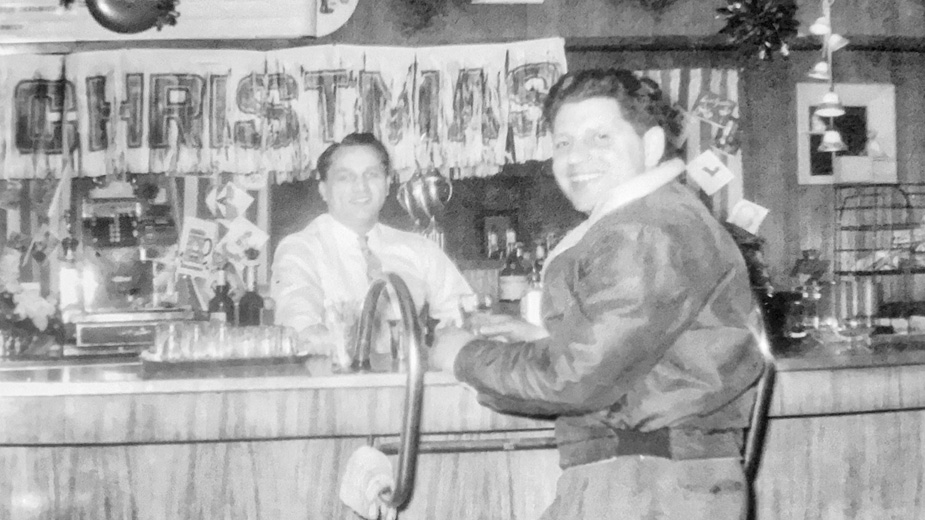 Muntean sold the restaurant to Blair Lewis, from whom Borza and his wife, Jessica,bought the restaurant in 1998. At the time, Borza was living in Pittsburgh. But he once told Lewis, “If you ever go to sell this place, call me.”

When he received that call, Borza says, “To sell everything I had in Pittsburgh and move back here, I wasn’t nervous about it. I had a really good feeling that it was right.”

Black-and-white family photos hang on the walls inside the restaurant and bar. Borza points to a portrait of Annie Pondi and says his mom would call her, “Great-aunt Annie.” He then points to another photo (above)from 1953 of the second owner, Nick Muntean, who at the time was a bartender for the restaurant.

“It’s a wonderful experience to come to old Lisbon, Ohio, and eat in a house that’s been here for over 100 years,” Borza says. “It’s truly unique and not a cookie-cutter chain restaurant. It’s an experience.”

The restaurant employs 36, including some who have worked at Pondi’s for the entire 20 years that the Borzas have owned it.

“Our staff does a good job of making people feel like this is their place. So if it’s their first time here, they feel at home,” says Jessica. “Even some of our regular customers will buy somebody else a drink. So that makes it special.”

One of its regulars, Colin Keller, eats at Pondi’s three to four times a week. He started coming to the restaurant 11 years ago because he passed it driving on his way home from work. He kept coming back for the people and the food, he says.

“One of my favorite meals is the BBQ meatloaf. But it’s a special so it doesn’t run all the time,” Keller says. “With the specials, there’s always something new each and every day.”

The menu lists appetizers, salads, wings, steaks, burgers, seafood and pasta dishes. And there are four to five specials every day that change, Jessica Borza says.

“We’re mainly known for our steaks,” she says. The steaks are purchased from Borza’s Meat Market in Lisbon, owned by Matt’s father.

The bar serves craft beers on tap that rotate, mixed drinks and a sangria, the flavor of which changes every week. “The bar crew is always making cool, specialty drinks,” Jessica Borza says. “They get creative with the cocktails and martinis.”

This summer the Borzas plan to restore the exterior of Pondi’s by putting on a new roof and siding and building a small front porch outside.

“We’ve had the best year we ever had,” Matt Borza says.

“We made upgrades to the back-of-the-house systems to make sure inventory is tighter so that we don’t run out of stuff,” he explains. “As a result, we’ve been able to accommodate more people on the weekends.”

Customers are a mix of residents from the village and those who travel from out of town to check out the long-standing restaurant.

“But for the people from Lisbon, it’s the first place they go when they come home from out of town. So it’s a tradition.”

Pictured at top: Jessica and Matt Borza purchased Pondi’s, a landmark in Lisbon, in 1998.