Developing the Potential in Every Child

YOUNGSTOWN, Ohio – To someone unfamiliar with the computer game Minecraft, a 14-year-old boy building a yellow Creeper character with cardboard boxes might seem like a simple art project. But to Dylan Oxley, it represents much more.

Oxley is a high school freshman at Potential Development, a nonpublic charter school for children with autism. When he has anger issues, he’s excused from class to work on the project, which helps him to calm down.

“The Creeper is a hostile object. It sometimes explains me when I get very angry,” Oxley says. “Let’s say you step into its personal bubble, it starts making a sound like TNT or a fuse is going off. If you don’t back up, it’s going to explode.” 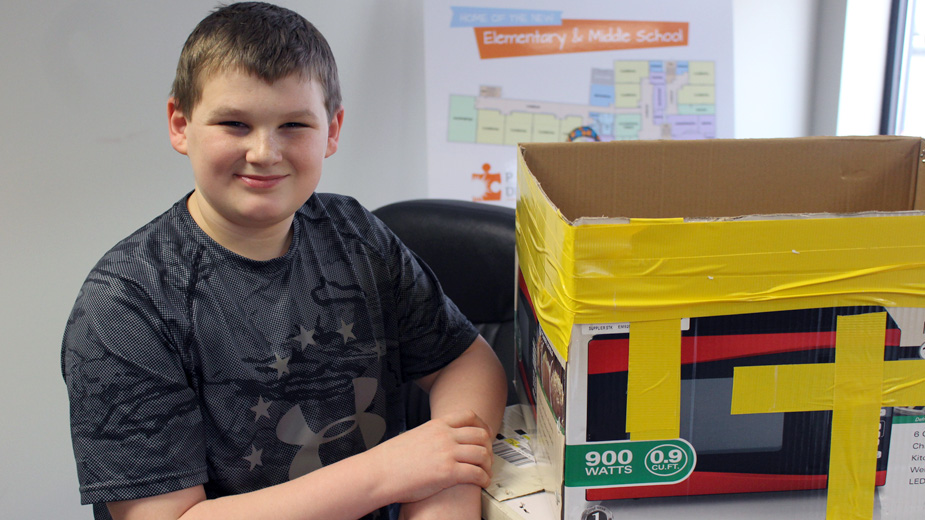 Oxley was diagnosed with level one autism spectrum disorder in February 2016. It’s the least severe level and can lead to behavior issues, including difficulty with social interaction and switching between activities, and problems with organization and planning.

In second grade, Oxley was misdiagnosed with attention-deficit/hyperactivity disorder, or ADHD. Oxley’s school had made accommodations and implemented an individualized education program, which is developed for students who need special attention.

“It wasn’t doing anything for his social struggles,” says his mother, Jackie Parisi. “And that is where a lot of his problems stem from.”

When Oxley was diagnosed with autism, Parisi says it didn’t surprise her and she made the switch to enroll her son in Potential Development.

“He was in trouble every day at his previous school,” she says. “I was going to get him in the middle of the day if he made it that far.”

At first the switch was a struggle, but Potential Development’s faculty and staff worked with Oxley.

“I can tell you that I have a completely different child,” his mother says, and he has come to recognize his behaviors a little more. “After a week or two [in the program], he started to feel like he could fit in,” she says. “He was learning to make friends. Dylan has friends for the first time in 14 years.”

Potential Development differentiates itself from a typical public school by making those special accommodations for students, says its executive director, Paul Garchar Jr. 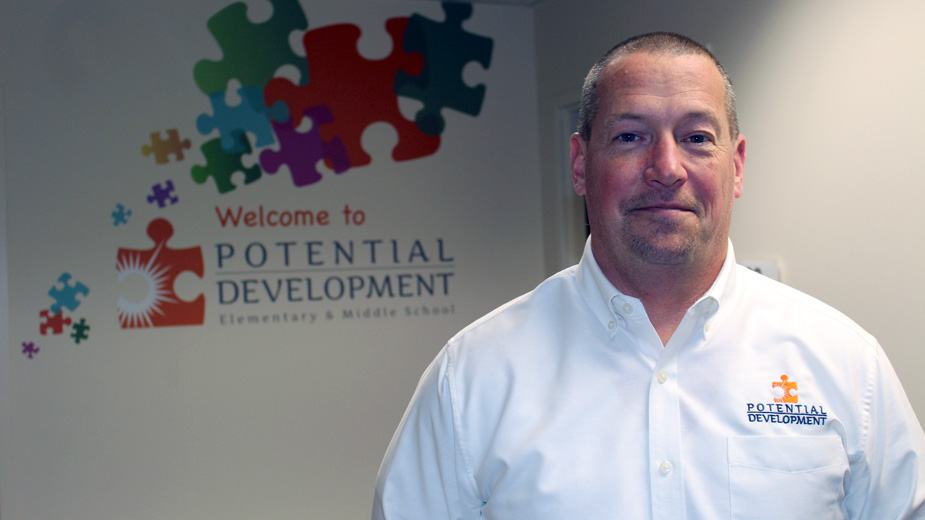 The organization, founded in 1953 as the United Cerebral Palsy Association, changed course in the mid-1970s to address the increase in children with delays in developing their speech and language skills and learning appropriate behavior – children who today would be diagnosed on the autism spectrum.

Potential Development received its charter in September 2001 and started enrolling preschool students as young as 2½. School-age programs began in 2008 and the high school opened in 2013, raising total enrollment to a record 165 – a reflection of the increased incidence of autism diagnoses, he says.

“It’s overwhelming,” Garchar says. “When I first became the director here almost 18 years ago, the incident rate was one birth in maybe 10,000. It’s down to one birth in 68.”

Potential Development relies on grants from several organizations, including the Youngstown Foundation and its Hine Memorial Fund, and the United Ways of Youngstown and the Mahoning Valley and of Trumbull County. The Ohio Department of Education’s Autism Scholarship Program is another major source of funding.

“We’re very proud of that,” the executive director says. “There was a lot of work that went into that and a lot of planning to get us to that point.”

A special education teacher and at least one aide teach classes of up to seven students and faculty take part in ongoing professional development programs.

Lauren Karas, a 2010 Youngstown State University graduate, teaches a classroom of fifth- and sixth-graders and brings six years of experience from teaching in the Boardman and Struthers school districts. She’s halfway through work on her master’s degree in counseling at Westminster College.

Sensory breaks are “a great opportunity for them to get up and get moving,” she says.

Interactive music and dance videos integrate movement and mindfulness, while sensory rooms can help students to either relax or energize.

Workspaces are individualized to each student and a table in the center of the classroom allows for group activities. Some classrooms are organized specifically for nonverbal students. For these students, teachers use special boards with pictures and icons to help them plan their day. 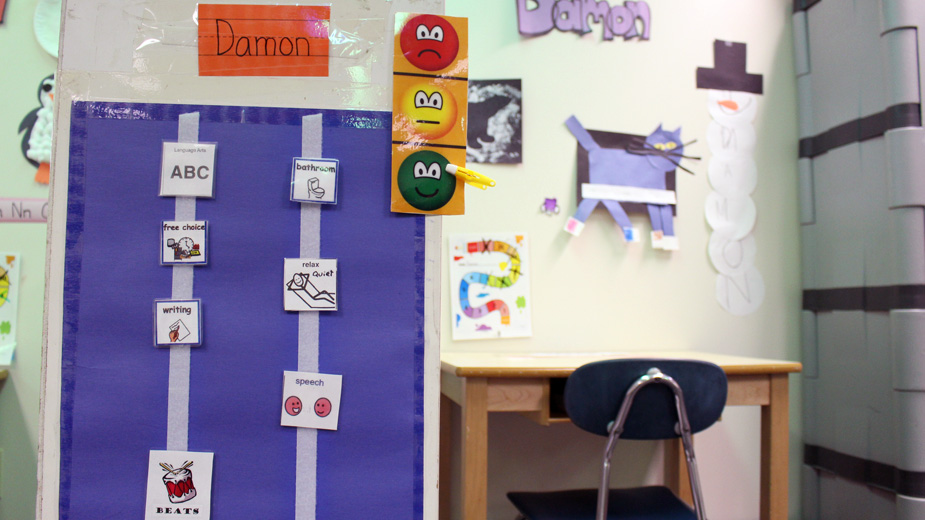 Teachers use picture symbols to help students plan their day.

The picture symbols represent core vocabulary words, such as “I” and “like,” and are universal throughout the United States, says Denise Firestone, Potential Development’s speech and language pathologist. Teachers work with students to arrange the symbols to form sentences that indicate if the child is hungry or needs to use the restroom.

“They help children when they’re first learning augmentative communication or if they’re nonverbal and starting to learn to become verbal,” Firestone says. 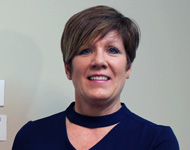 Many of the students at Potential Development have difficulty grasping and using augmentative communication despite the efforts of faculty and staff. However, they do communicate their wants and needs in a variety of ways.

Speech pathologist Denise Firestone is responsible for identifying those individual communication modalities with each student. Modalities can be anything from a student who waves to another adult or a peer, or makes fleeting eye contact when he lacked the skill weeks before.

“This is how I measure success,” Firestone says. “It may not always be a written goal on their IEP [individualized education program], but it speaks volumes. They are understanding and grasping that communication is an interaction between two or more people.”

Firestone, a graduate of Ohio University with a master’s in speech and language pathology, understands how communication is a vital part of a person’s being.

While she started her career working with patients who suffered a head injury or a stroke, she decided to work with children with autism, both verbal and nonverbal, because they need a viable outlet for social and educational communication, she says.

“They need some communication that they can use in their daily lives,” she says. “Many times there is a breakdown of communication and a negative behavior will result. When a student can request a sensory break, quiet time, or ask for help before a behavior occurs, then they have successfully learned an important life skill and an effective communication technique.”

Working at Potential Development enables Firestone to spend extra time every day interacting and communicating on all levels with students.

Watching the students grow and begin to have meaningful communication with their loved ones, peers and other adults “makes me feel like we’re making a difference for them in their life and the quality of their life,” she says.

“That is what I love about my job,” she says. “I am committed to providing a safe, loving, supportive environment for our students to achieve their highest and greatest potential in all areas of their lives.”

The school also employs augmentative devices such as iPads and GoTalk, the latter a programmable communication device that uses picture sheets that represent items or phrases such as “Hello, it’s nice to see you,” “I need help,” or “I need to use the bathroom.” Students communicate by pressing the icons.

“Most of our teachers incorporate this in their classroom teaching,” Firestone says. “As a child becomes more verbal, they still are able to use this.”

Speech and occupational therapies are conducted in the classroom or in therapy rooms. Occupational therapy focuses on motor skills, such as using a pencil, while speech therapy is important for communication and verbalization.

Communication was a big issue for the children of Elyssa and Chris Thomas when they were diagnosed. Twins Colton “Colt” and Hunter, 5, are on the more severe end of the spectrum while their sister, Zoe, 4, is moderate. 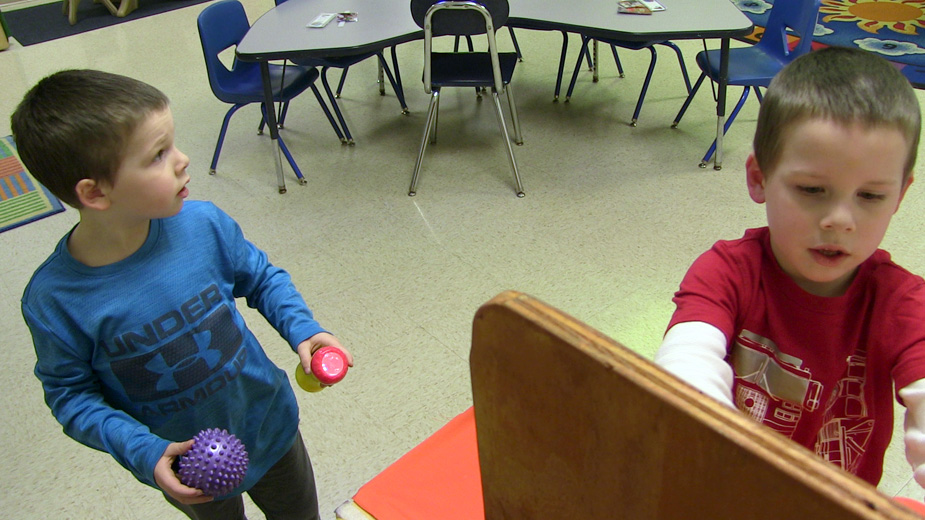 Before the diagnoses, the twins weren’t meeting the mobility and communication milestones reached by Elyssa Thomas’ first son who isn’t autistic. After the diagnosis, the Thomases didn’t know where to get the help they needed.

That was the most difficult part, Thomas says, because they had just moved back to Youngstown from Charlottesville, Va.

Thomas heard about Potential Development from her husband’s co-worker, but was apprehensive about moving the twins from their public preschool. A big change can be difficult for children with autism, she says, but she was intrigued.

All three enrolled in the preschool program for the 2017 school year and already Thomas is seeing improvements.

“From Day One, their speech has improved,” she says. “We’ve had fewer meltdowns, which has made it a lot easier for us. The speech isn’t super clear, but it’s enough that we all understand what they’re saying.”

Potential Development works with other organizations to provide its students with physical activities. Gymsters holds gym class at the preschool once a week in the building’s group activity room. Smarts – Students Motivated by the Arts – organizes drum circles at the elementary/middle school to encourage and engage the students’ communication and motor skills.

A renovation planned for the second floor of the elementary/middle school building will allow Potential Development to offer more programs and expand its reach, Garchar says. The school works with 32 school districts in Mahoning and Trumbull counties and is looking to expand outside the Mahoning Valley.

The renovation would add eight more classrooms and an elevator, which could translate into another 50 to 60 students, he says. The timeline depends on funding.

“We’re looking at around $275,000 to renovate the upstairs,” he says. “We would really like to make Potential Development a regional program.”

The school has introduced extracurricular activities, including swimming lessons, basketball, bowling and springtime track. 2017 was the first year the school participated in the YSU English Festival. Potential Development is developing relationships with community colleges and other institutions for vocational support after students finish their senior year of high school.

“We’re looking for ways to round out their educational experience,” Garchar says. “We want to be a part of that transition into young adulthood and help them further their lives.”

That’s something parents such as Elyssa Thomas are very happy to hear.

“It’s exactly what I want to give my kids,” she says. “I want them to be able to do the things that they would do at school.” 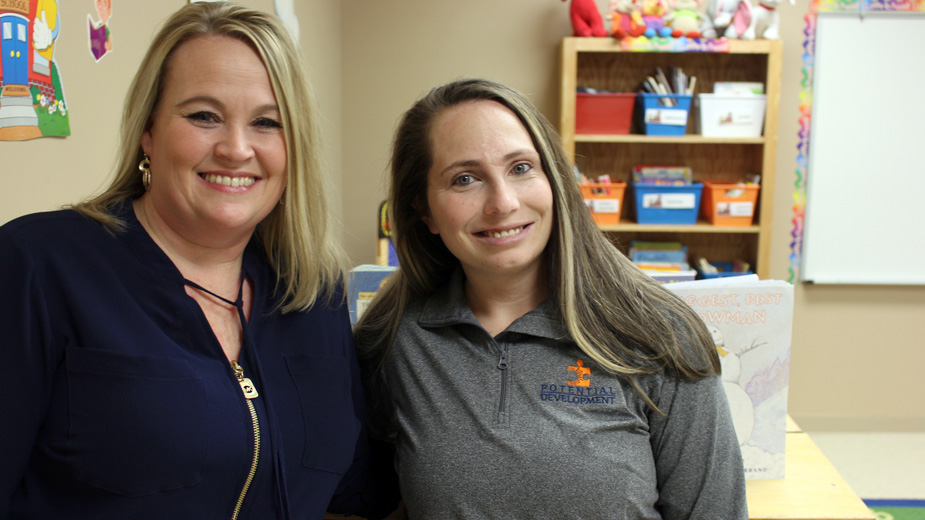