YOUNGSTOWN, Ohio – Gov. Mike DeWine said Tuesday that General Motors Co. executives told him just days ago that the company could divulge its plans regarding the future of the Lordstown manufacturing complex in a matter of weeks.

“The last time we asked them – two days ago – they said four to six weeks,” the governor said. “But, this is a moving target, so I’m not sure we can rely on that.”

DeWine reiterated his understanding that GM is looking to sell the plant to another company, but he cautioned that he doesn’t know who GM is talking with or the status of these discussions. “It’s clear something is going on,” he said.

The governor said that the state wants to be involved in any development at the Lordstown plant as soon as possible in order to help facilitate any project there. “The state is going to be actively involved to help, and we can’t help until someone says what help they need.”

The GM Lordstown Complex last Wednesday manufactured its final Chevrolet Cruze. Once the shift was over, about 1,300 workers were placed on layoff.

DeWine said it’s extremely important that the plant be repurposed in the case that GM opts not to award another product there. “Ideally, we’ve always wanted General Motors to put a new line in there,” he said. “It’s clear to me that they’re looking at not putting a new line of General Motors in there. They’re looking at something else. What that else is, I don’t know. But it’s clear from our discussions that there is something actively going on.”

The fallback position, the governor said, was to get another company to come in, presumably another automaker. “I’m just assuming we’re talking an auto company, but I don’t know that for sure.”

DeWine said that his office is in contact with GM at least twice a week. “We have told them that the sooner they could bring us in, the better,” he said. “We want to be proactive and be helpful to put a package together and do what we can do to help get that plant moving forward again.” 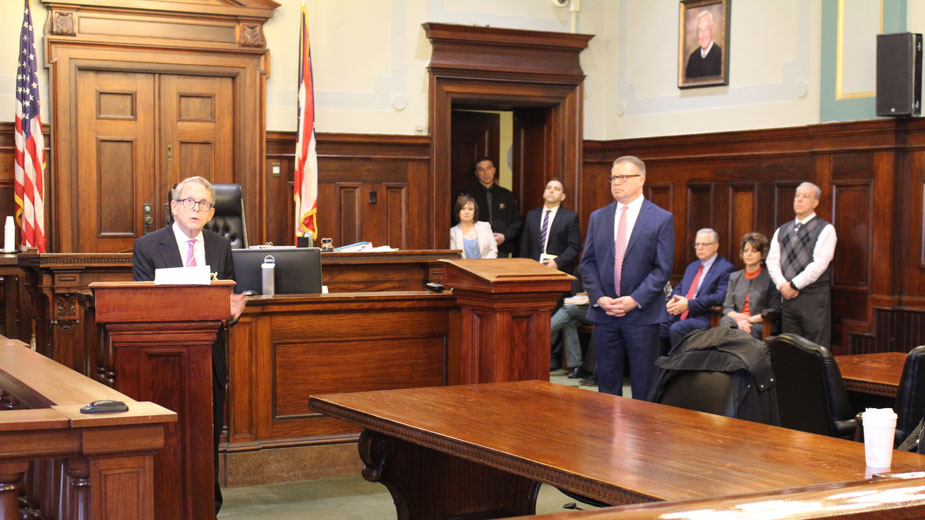 DeWine used the visit to announce increased funding for drug courts across the state as part of a budget bill he will introduce on Friday.

The governor’s budget includes an additional $7.5 million to fund 30 more drug courts across the state.

“Recidivism rates for those who successfully complete the program is are less than 10%,” said Judge John Durkin, who oversees the Mahoning County program. “Three years out, it’s less than 7%.”

Durkin said that the governor’s visit underscores the importance these courts play in their respective communities, and the results in Mahoning County have been exceptional. “Drug courts work because of the members of our team. The collaboration that we’ve built — we’ve been able to demonstrate that success.”

DeWine added that drug courts are tough, but they work because the person enrolled is facing few options before them other than jail time.

by The Warren Flea & Farmers Market - 6 hours ago

LORDSTOWN, Ohio – Lordstown Motors Corp.’s share value plunged to its all-time low Monday after sliding more than 8% by afternoon trading. The company, which trades under the ticker RIDE, hit $1.38 per share, the lowest unit price since the…

LORDSTOWN, Ohio – Former Lordstown Motors CEO Steve Burns has sold off another 3.9 million shares of stock in the company worth approximately $7 million, according to a regulatory filing released late Tuesday.  The sale prices ranged at a weighted…