Looking Back at 90 Years in Business

NORTH LIMA, Ohio — The job might have consisted of placing an HVAC unit atop a building. Or, the task could have called for the relocation and installation of a piece of heavy machinery for a large industrial customer, or even the construction of a steel frame of an entire building.

As Dave Collins drives around the Mahoning Valley, he sees hundreds of structures that his company – Diamond Steel Construction Co. of North Lima – has helped build or improve in the 90 years it’s been in business.

“We’ve touched so many things,” says Collins, Diamond Steel’s president. Indeed, after nearly a century, there are countless projects dating from the late 1920s to the present – office buildings, churches, steel mills – that still bear the company’s fingerprints.

“It’s been quite a story,” he says, reflecting on the people and their work that have left this legacy.

Diamond Steel is among the premiere businesses that operate large boom crane trucks, the toughest of which is capable of handling 275 tons, Collins says. 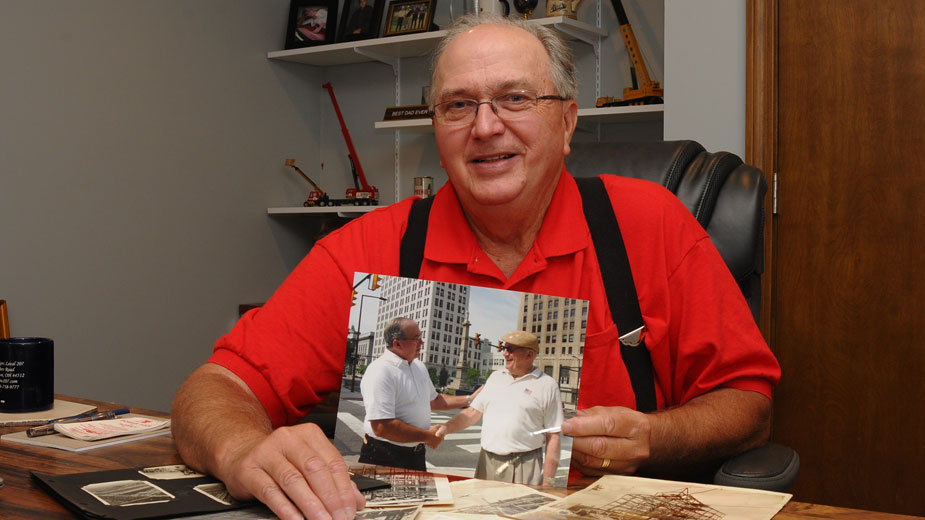 Dave Collins displays a photo of himself and Clarence Smith Jr. that was taken on the day Collins purchased the company.

Today, the company has more than 100 on the payroll and boasts a fleet of 27 mobile boom cranes that it uses for heavy-duty projects.

It’s a long journey from 1928, when Clarence Smith Sr., a former ironworker, decided to establish his own structural steel company.

The name Diamond Steel is actually derived from the central square in downtown Youngstown – at that time known as the “Diamond,” Collins says. “Those were the boom times before the bust,” he notes – referencing the speculative period predating the stock market crash of 1929 and the ensuing Great Depression of the 1930s.

“Mr. Smith would go downtown and pick up his employees,” Collins says, since the union hall was on the southwest corner of the Diamond. “No one had a car or a phone, so you went downtown to see who was there, picked them up and took them out to work. That’s how it all started.”

Smith Sr. ran the business until the early 1950s, and retired after suffering health problems. His son, Clarence Smith Jr. – who would go on to establish Compco Industries and numerous other companies across the region – took charge from there and was responsible for bringing Collins’ father, Arnold, an accountant, into the company. 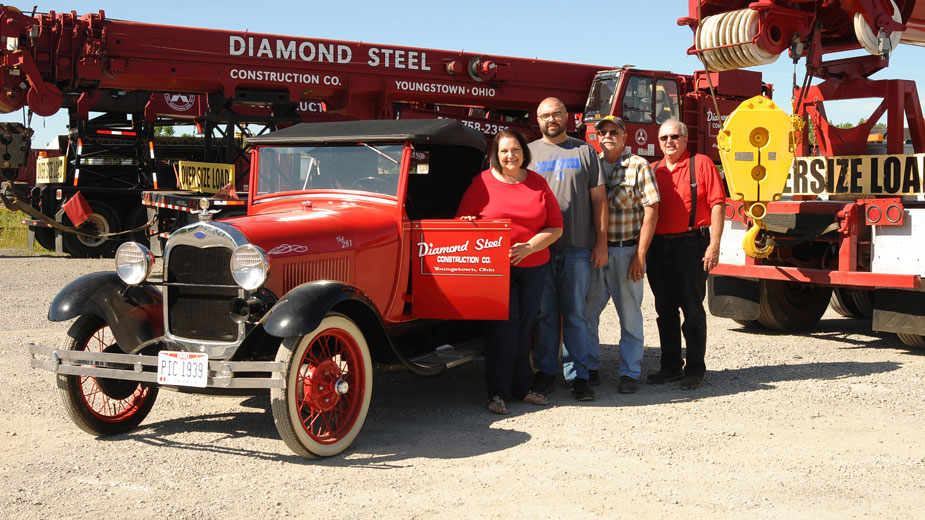 Mary Ann (left), Jonathan, Larry and Dave Collins pose next to a restored 1928 Ford Model A, built the same year Diamond Steel was established. Behind them is a boom crane.

The addition of Arnold Collins helped usher in a long-standing friendship with the Smith family, as the elder Collins went on to become vice president at Compco.

“That’s kind of how I got involved with the Smith family,” Collins recalls, who joined Diamond Steel in 1976. Collins purchased the controlling shares of Diamond from Smith in 2005, officially transferring ownership on downtown’s central square, where the papers were signed.

“It was my idea to do it there,” Collins remembers. “I said, ‘It started here, it needs to transfer here.’ ”

Throughout its history, Diamond Steel has helped build or has worked on countless iconic structures.

More recently, the company’s boom cranes were used in the renovation of the landmark, 13-story Stambaugh Building as it was converted into the DoubleTree by Hilton.

Still, the crux of Diamond Steel’s success has come in the industrial sector – providing the equipment necessary for operators and tradesmen to perform maintenance work in the region’s large steel mills.

One of the company’s major customers was R.G. Steel., the former WCI Steel in Warren. About six years ago, R.G. Steel liquidated its Warren assets, closed the mill, and the sprawling site is today mostly vacant land. The last blast furnace in the region was demolished there last year.

“That was our home for years,” Collins says. “We really had to regroup when they closed. That was a tough time.”

Lessons were learned from the experience, Collins says. “We were lucky enough to diversify our customer base – we still do quite a bit of work in the steel industry, NLMK in Sharon has been a good customer for us – and we’ve moved into the titanium industry,” he says.

The buildings all require maintenance, and Diamond Steel has established a strong relationship with the industrial trades – particularly the operating engineers, ironworkers, millwrights and teamsters.

“We use all of these people everyday,” Collins says.

Business has increased considerably since 2016, Collins says, as projects that once were on hold moved forward.

On average, Diamond Steel is accustomed to having between 30 and 35 on the payroll during peak construction season. But now, the company has more than 100 workers in the field – and that number still isn’t enough to satisfy demand.

McBride, a former R.G. Steel employee, joined Diamond Steel five years ago. In this time, the company has moved into other fields and is doing work for the plastics industry, the food industry, power generation plants and other business sectors.

“We’re moving monuments for churches, sculptures, work for the hotel downtown,” he says. “My thought is to bring more diversification to take you through when one sector is down.”

As far as steel is concerned, about half of Diamond’s customers should benefit from the 25% tariffs recently applied to foreign imports to the United States. The other half, however, are likely to feel the pinch because of higher material prices. “But the market is doing well from a steel standpoint,” McBride says.

Overall, the market has never been better for the company, he continues. Diamond Steel is working with contractor Lee Michael Industries on the $60 million melt shop Ellwood Quality Steels is building at its New Castle, Pennsylvania, plant, while also providing boom cranes for the $900 million Hickory Run power generation plant under construction in Lawrence County.

“I see us continuing to grow,” McBride says. “If the market stays the way it is – we’re more than 100 on the payroll – and I don’t see an end in sight through the first quarter of next year.”

Much of the business Diamond does is because of an emergency situation, so it’s difficult to plan ahead.

“It’s a number of little things put together that allows us to draw upon the pool of people and equipment we have in the yard,” Collins says.

This equipment ranges from small mobile cranes with a capacity to handle six tons – the size of a Jeep – to the 275-ton behemoth, the largest of its kind between Cleveland and Pittsburgh.

“All of our cranes are hydraulic truck cranes,” he says. “We can drive to a job and go to work pretty quickly.”

At times, Diamond has leased and rented its cranes to competitors, noting that over the years these companies have developed productive working relationships with one another.

“Our competitors have been good people throughout the years,” Collins says. “It’s not a cut-throat business – the margins are small – but the folks are good people.”

Yet Collins says it isn’t easy to staff qualified employees and operators in this market, especially since larger projects such as Royal Dutch Shell’s $6 billion ethane cracker plant are drawing skilled tradesmen away, promising them higher pay and lots of work.

“It’s tough to compete,” he says. “But, the phone rings all the time. It might be a crane rental for less than $1,000 or it could be the next million-dollar job.”