BOARDMAN, Ohio – The showroom at Donnell Ford, the long-standing car dealership on Market Street in Boardman, has been destroyed by a fire.

Owner David Flynn, who purchased the dealership in 1982, said he expects to have the service operation, which is mostly intact, back in operation sometime next week.

He added that an insurance agent is on his way from Mansfield. Flynn didn’t disclose how many cars were in the showroom or the value of the dealership. However, he did say that “it can be replaced. We’ll get by.” 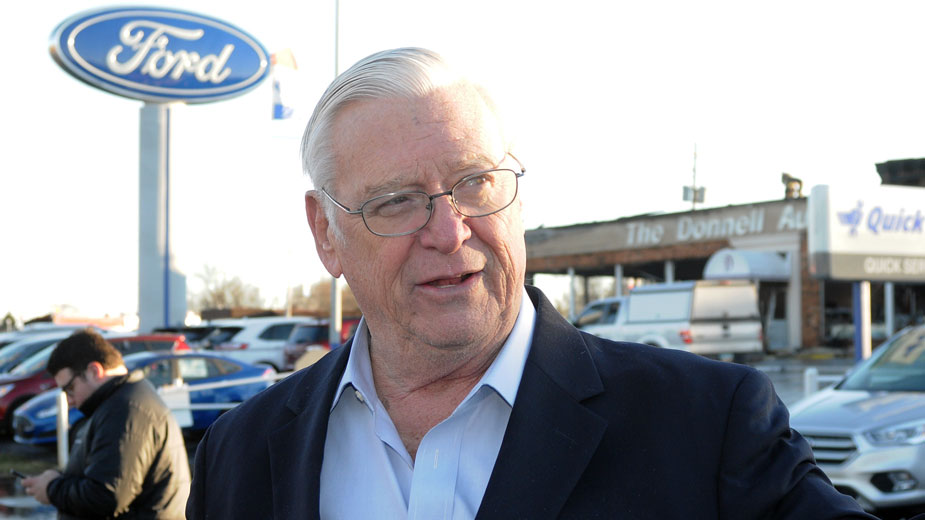 Donnell Ford owner David Flynn.
Crews arrived on the scene just after 4 a.m. Friday. Firefighters from Youngstown, Canfield, Poland and Beaver Township were called in to assist as well, as were all off-duty Boardman firefighters.

Flynn said the cause of the fire is yet to be determined.

Jessyca Hovis, who lives in an apartment complex across the street, said that she was awakened by what she described as loud shotgun blast and then looked out her window and saw the flames. “When I came out here, everything was being handled. More and more trucks were coming in.”

No injuries are reported, though much of the showroom is destroyed save for the brick facade around the showroom. The only occupant of the showroom at the time of the fire was a cat named Shelby. Firefighters rescued the cat and Flynn said the animal was taken to Angels for Animals. 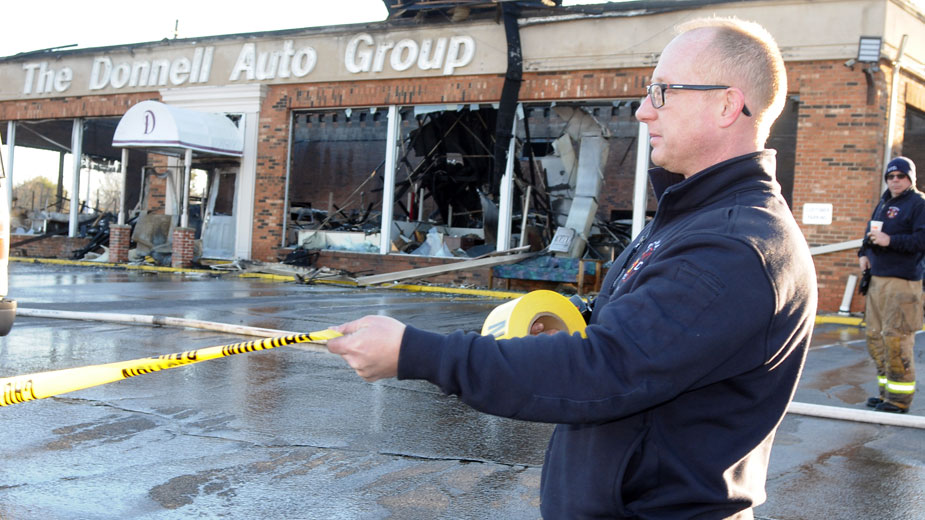 Boardman Township Fire Chief Mark Pitzer said that investigators were on site to determine the cause of the blaze, but noted that at this time it did not look suspicious or intentional. State fire marshals were at the site investigating.

“This was a very challenging fire,” Pitzer said.

No vehicles in the outside lot appear to be damaged.

Shortly after arriving at the scene, Boardman firefighters were called to battle another blaze at an apartment complex on Mathews Road.

“Our hats off the Youngstown Fire Department,” Pitzer said, who assisted in that fire. “Without them tonight, we would have had a devastating fire on Mathews Road.” Two people ages 61 and 35 were rescued from the second floor of that apartment building.

The dealership is part of Flynn Auto Group, which also operates Donnell Ford Lincoln in Salem, Columbiana Cadillac Buick Chevrolet, Power GM in Calcutta and The Honda Store in Boardman.

According to the Greater Cleveland Automobile Dealers Association, Donnell sold 79 new and used vehicles in February. The dealership’s website, it typically has more than 200 vehicles in stock.