YOUNGSTOWN, Ohio – Workers scurried around the new DoubleTree by Hilton Youngstown Monday in preparation of the arrival of its first guests.

Contractors were putting the finishing touches on the exterior of the downtown hotel as painters and other work crews completed the interior work, barely a day ahead of its official opening today.

Amy Liakaris, director of sales, was confident that that the property would be ready to welcome its first guests today.

“Yes, absolutely,” she said Monday. “We’re basically getting all of our ducks in a row.”

Today’s long-anticipated opening concludes a journey that began years ago. In March 2013, The Business Journal first reported on plans for a hotel in the historic Stambaugh Building, which for decades housed the offices of Youngstown Sheet & Tube Co. The formal announcement was made in November 2014.

“It’s been a great adventure, watching the hotel transform from where it was six months ago to where it is now,” Liakaris said. “It’s just been an amazing transformation. It’s a beautiful hotel.”

“The project has been at once exciting, challenging, rewarding – everything at once,” said Jackie Marchionda, designer with NYO Property Group, one of the partners in the project. “You plan as best you can and you work with all the experts that you have on hand, but you can never plan for every obstacle or challenge that gets put in your way.”

The 12-story hotel will open with 125 guest rooms and features three meeting spaces on the second floor, as well as the Palladium Ballroom on the top floor, which can be divided into three spaces. The DoubleTree website touts the hotel’s proximity to the Covelli Centre, Youngstown State University as well as to “America Makes, Youngstown Business Incubator, Turning Technologies, Vallourec Star, General Motors and Taylor-Winfield Technologies, making us perfect for business travelers.”

Financing for the $32 million renovation of the landmark building, built in 1907, involved a complex capital stack that included $11.5 million in bond financing from the Western Reserve Port Authority, $9 million in state and federal historic preservation tax credits, and private financing.

Room rates are between $129 and $179 per night, depending on the season, Liakaris said

Working on the building has been “a professional moment of pride,” said Paul Hagman, president of architecture company RBF CoLab. Hagman specializes in historic preservation and adaptive reuse.

For Hagman, one of his favorite moments was the discovery of prism glass that was in the building’s storefront.

The band of glass was shown in the original documents for the building, but the feature was concealed during various changes made over time to accommodate tenants, Hagman said. It was only uncovered during the selective demolition phase of the project.

“Unfortunately, we could not save the original glass but we were able to use the proportions and the type of glass to inform the new glass that was put there,” he said.

The glass style wasn’t the only unexpected architectural detail that served as inspiration for the final stylings.

“We anticipated being able to incorporate all the beautiful marble and the high ceilings and the detail in the terrazzo,” Marchionda said. “They weren’t necessarily a surprise but they were even more beautiful than we expected once everything was completed.”

As with the rest of the hotel, the property’s restaurant, Bistro 1907, remains a hive of activity as it prepares to begin operations. Accomplishing “a five-month build in seven weeks,” said operator Mark Canzonetta, “should have been a television show.

“It’s typical eye of the storm,” he continued. “It’s just like with a football coach – you’re fourth and goal at the one yard with five seconds to go, and we’re going to make it.”

Bistro 1907 will be open for breakfast this week for DoubleTree guests, he said. Beginning next week, the restaurant will be open to hotel guests and the general public for breakfast, lunch and dinner. It will have 70 full- and part-time employees.

The restaurant will handle onsite catering for events and eventually room service for the DoubleTree, according to Lauren Lindvig, managing partner of Bliss 360 Marketing, which handles marketing for Bistro 1907.

“We’re just so very excited to be a part of the Mahoning Valley and the downtown revitalization,” Canzonetta said. “It’s wonderful and we could not be happier to be here.” 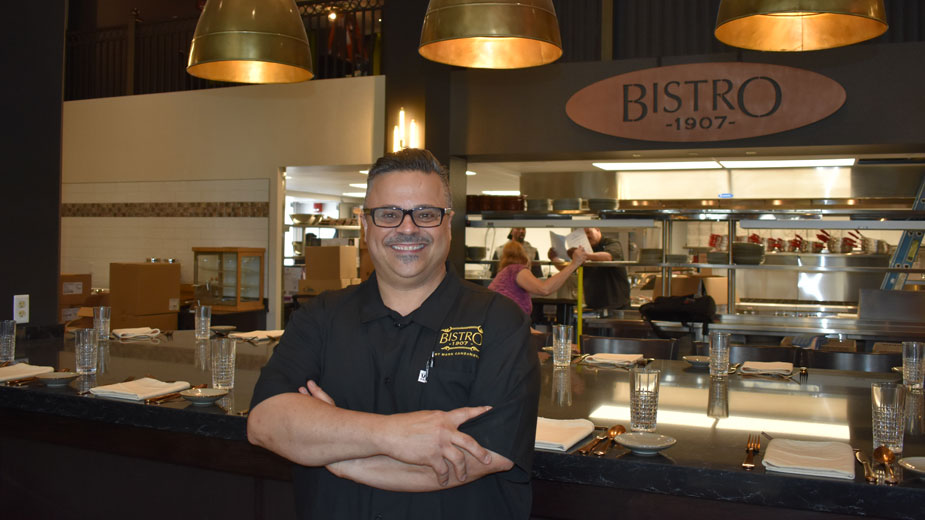 The hotel itself will have 33 employees when it opens, though it is continuing to add staff, Liakaris said. It will open at 25% occupancy for what she describes at its soft opening today, but is “completely sold out” Wednesday and Thursday, mostly for an in-house conference.

She also is optimistic for prospects for the property further out.

Editor’s Note: Interior photos are from the hotel’s website.