YOUNGSTOWN, Ohio – The process of converting the historic Stambaugh Building into the new DoubleTree by Hilton Youngstown Downtown hotel was a “finely choreographed dance” between Hilton’s standards and the historic preservation requirements, the hotel’s general manager said.

“This is definitely a unique project,” said general manager Steve Mitchell. “Most hotels are similar in construction and style. The fact that this was originally built as something other than a hotel makes the construction and the layout very different.”

The DoubleTree  opened its doors Tuesday for a soft opening. The hotel’s management team conducted tours of the property Wednesday for local media outlets and representatives of the development team were on hand to discuss the project. (READ STORY)

Constructed in 1907 as an eight-story structure, the Stambaugh Building, housed the offices of the Youngstown Sheet and Tube Co. In 1914, the upper floors were added to the building, bringing it to 12 stories. NYO Property Group announced plans in 2014 to redevelop the property as a hotel under Hilton’s DoubleTree brand.

“Our vision for the building was to respect the architecture that we found when we got into this building and did the demolition,” said Jacqueline Marchionda, designer for NYO Property Group.

The building’s historic features include “a tremendous amount of terrazzo on every floor,” brass and iron elements, Palladian windows on the eighth and 12th floors, crown molding and marble, she said. “Those were our inspirations for this building because we wanted to highlight the original architectural elements.” 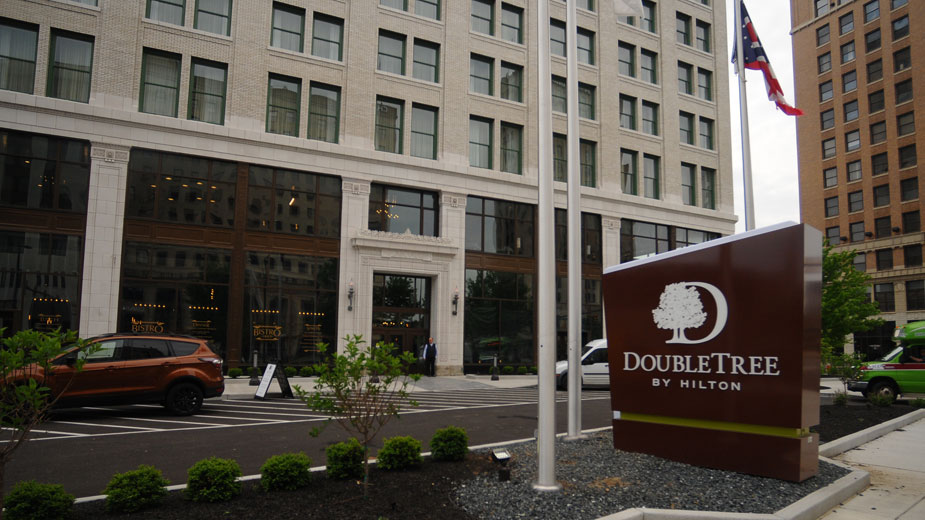 The marble wainscoting is original to the building, which also retained the mail slots next to the elevators, said director of sales Amy Liakaris. “And through every hallway you’ll find the old mahogany doors that used to be the old office doors,” she said.

MS Consultants had to work with corridors that already were in place, and retrofit “in a nonuniform building very uniform-type hotel rooms,” said architect Annissa Neider. Ceiling heights were nine to 11 feet, higher than the eight feet found in a typical hotel room.

“It was challenging because of the existing structure that we had to work with,” she acknowledged.

The project’s biggest challenge was balancing between Hilton’s standards and the requirements established by the National Park Service for the historic preservation tax credits that the project received.

“There had to be a finely choreographed dance between the two,” Mitchell said. “They wanted the original floor to be displayed, which was marble,” but Hilton’s standards discourage the hard surface because it allows noise to carry through the halls.

The large windows throughout are atypical for a hotel, but help the rooms feel bigger because they make the rooms brighter, Mitchell said. The effect is “a more dramatic” on the eighth floor, which retained the Palladian windows from when it was the building’s top level, he said.

The color scheme throughout the hotel incorporates grays, blacks and other “timeless colors,” Marchionda said.

“I wanted it to be classic and elegant,” she said. “We used a lot of mixed metals. We used the gold and the brass and the black.” And there are green elements in the design, a nod to the copper cornice surrounding the top of the building that has over time weathered to green.

On the 12th level of the building is the 4,100-square-foot Palladian Ballroom. “It’s more uncommon than it is common” for such a space to be in the upper level of a building rather than lower space, Mitchell acknowledged. Originally, more rooms were going to be put on the floor, before the decision as made to use it as ballroom space to capitalize on the view from that level.

The space can accommodate 136 guests with round tables in place or cocktail receptions for approximately 250, Liakaris said.

The floor “has some amazing views of downtown,” MS Consultants’ Neider said. The space provides the opportunity to show the public “what the city looks like from a perspective that hasn’t been seen in over a decade” and “how beautiful the city truly is,” she added.

Community response is outstanding, Liakaris said. “This week and next, we’re at about 100% capacity each day,” she reported.

Seeing people staying and working in a space she drew is “pretty phenomenal,” Neider said. To see how the property has developed in the four and a half years she worked on the project and to consider its role as a “prominent space” in Youngstown’s rebirth is “monumental,” she said.

The hotel is an anchor for “a lot of other things that we need to bring into the city,” said First Ward councilman Julius Oliver. “This is something we can use to not only to motivate the city but also to bring in more businesses and events now that we have an established hotel downtown.”

Work remains to be finished. Branch Street Coffee Roasters and Yosteria Tapas will join Bistro 1907 in space at the south end of the first floor. Those restaurants are expected to open by late July, Liakaris said.

There is talk of widening the ballroom when the hotel may no longer be under the historic tax credit restrictions it works with now, Mitchell said. A rooftop bar also still is being discussed, a concept that appears to be gaining momentum now that the hotel is open.

“Nothing this year, maybe a year out. But I know that’s still alive,” Mitchell said.

Pictured at top: Jacqueline Marchionda shows Terrill Vidale, owner of 2Deep Entertainment, one of the bedrooms in the new hotel.

VIDEO:
Marchionda Thanks Partners as Hotel Opens
Tour the DoubleTree by Hilton Youngstown

YOUNGSTOWN, Ohio – The Mahoning County Land Bank’s executive director, Debora Flora, said she hopes to have a lease agreement for her board of directors to act on in a couple weeks. Flora, along with land bank board chairman Daniel…