Dellick was joined by school superintendents Monday at the Mahoning County Juvenile Court to discuss how the system has supported the schools and their students.

The system is a joint attempt between local school districts and the Juvenile Court to notice and tend to students with mental health concerns or behavioral problems, decreasing the number of dropouts and juvenile detentions.

Specifically, the system tracks students for truancy, including attendance, behavior and grades. Schools set levels of expectation from their students and select what programs will work best for their situation. Programs are tailored to meet specific needs of students, including those who suffer from anxiety and depression, which often stem from an increase in stress and pressure to produce good grades and be active in their school life.

The system was launched with a federal grant n 2014, with Mahoning County being one of four counties across the United States to receive the funds. Knowing the grant would end, and seeing the results, Dellick and the school districts prepared to keep the program going.

“In the beginning, we had more students in detention and we had more truancy cases,” Dellick said. “Truancy is down by 50%. We were able to start transitioning [our former detention staff] to other roles and we no longer need the funding because we are now self-sufficient.” 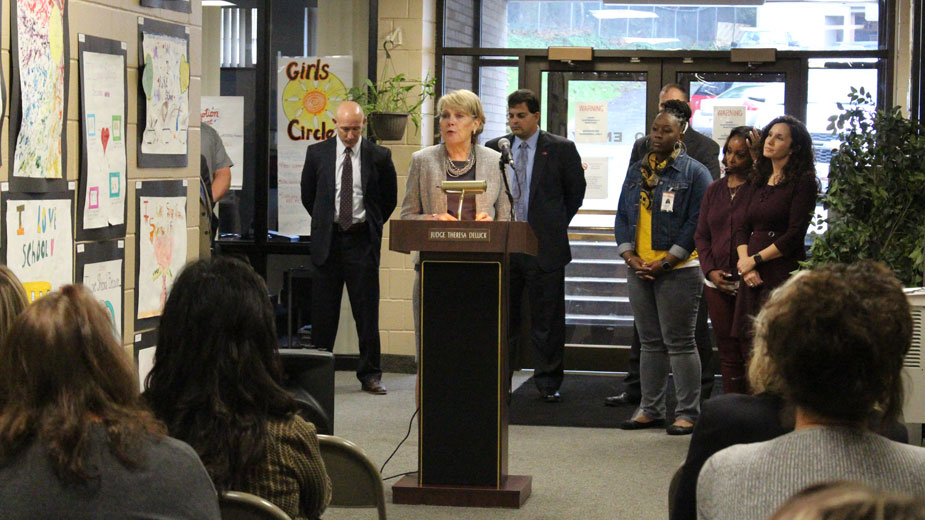 Jamie Miller of Alta Behavioral Healthcare has implemented depression screening for children ages 12 and older who come for behavioral services, as well as in the schools. So far, 500 school children have been screened. Miller said this program has helped off-track kids and academically successful kids alike, reaching out to everyone and improving mental health in general.

Chris Berni, senior principal at Austintown Fitch High School, said the program targets non-academic factors that effect a child’s mental well-being. The program has helped “shape their minds and hearts to keep them in the classroom,” he said.

Canfield Superintendent Alex Geordan said tthe program has helped students to improve social and emotional stability. Recently, a group of female Canfield students got together with the parent-teacher organization to transform the girls restrooms with messages of inspiration and positivity.

“The early-warning system gives positive messages to the kids and surrounds them with support,” said Geordan.

Kirk Baker, superintendent of Jackson-Milton Local School District, noted that the early warning system leaders “come out and do circle groups with kids so they can talk about what’s going on.”

Struthers City Schools is entering its fourth year using the system and has seen an increase in academic performance and a decrease in tardiness.

Tim Saxton, Boardman uperintendent, is proud to be one of the original three schools to use the program. After a bit of a disconnect in the past between the juvenile court and the schools, he is happy to see how the program has tied the schools together to provide immediate attention to the students.

“We’re talking and working in conjunction so that we’re helping kids, not just referring kids and handing them off,” Saxton said. “The biggest change is that we are proactive. We’re able to identify students before they are even referred to juvenile detention.”

The kids are categorized by the most on track to the least on track in regards to their schooling, and appropriate help is given quickly. Services within the school are available for kids with social or emotional needs as well.

“In the past, it was hard for the schools to get into the home. Now, early warning system has a social worker that can get into the home and provide help to the parents. It’s a wrap-around approach to take a look at all kinds of different sources to help that kid solve the problem,” Saxton said.