EAST PALESTINE, Ohio — Officials in East Palestine are “planting seeds for the future” to bring in more jobs in spinoff industries that could locate in the village as a result of Royal Dutch Shell’s ethane cracker plant under construction in nearby Monaca, Pa., says village manager Peter Monteleone.

“We’re trying to identify what we can do to be proactive and turn things around because we realize there’s a lot going on with everything in Monaca,” Monteleone says. “We’re trying to be ahead of the game as much as we can, so over the next five years we can catch some of those byproduct results.”

Sitting less than a mile from the Ohio-Pennsylvania border, East Palestine is about 20 miles northwest of where Shell is building the $6 billion plant. Once it comes online, plastics plants are expected to follow.

East Palestine is in the beginning stages of drafting contracts to create a joint economic development district, or JEDD, with Unity Township, which surrounds the village.

“When business and industry come to East Palestine and they’re looking at expansion, we only have a limited amount of space where we can put them and we don’t have any large tracts available,” says Alan Cohen, acting mayor and councilman of East Palestine. “We are trying to establish a JEDD to open up large tracts of real estate that could be developed for business and industry that’s not available to us now.” 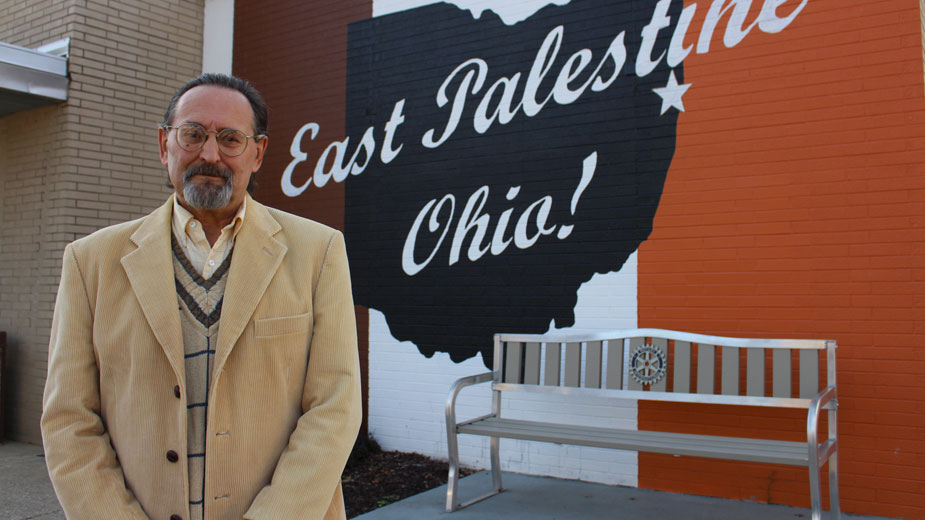 Alan Cohen, acting mayor and councilman of East Palestine, says he wants the village to once again be a “vital manufacturing center.”

Under the JEDD, East Palestine will provide Unity Township with the infrastructure it needs to support economic development. Business and industry that moves into the JEDD area will pay the same income tax that is paid in East Palestine, so that would represent income to Unity Township and to the village.

Cohen, who has been a resident of East Palestine his entire life, says the biggest change he’s seen in the village is the loss of business and industry.

“The vision that I have of the village is somewhat like what it used to be when it was a thriving and vital manufacturing center. I’ve never lost that vision of what it was like and I don’t think that’s a vision that’s too far out of sight,” Cohen says. “We have to be open to ideas like the JEDD and understand that in order to realize that vision we have to be willing to pay for it too.”

“We’ve known for the last several years that these are projects coming up and we’ve been planning,” says village manager Monteleone. “In 2013 we had a piece of equipment freeze in the wells and we lost water in the village for a day. That led us in the direction that we needed to make sure nothing liked that happened again.”

In order to pay for the improvements, the village has had multiple rate increases on its water and wastewater bills.

In October, the village replaced five of its pavilions in the East Palestine City Park after receiving $18,000 in grants from the Ohio Department of Natural Resources, with the village covering the remaining $12,000. 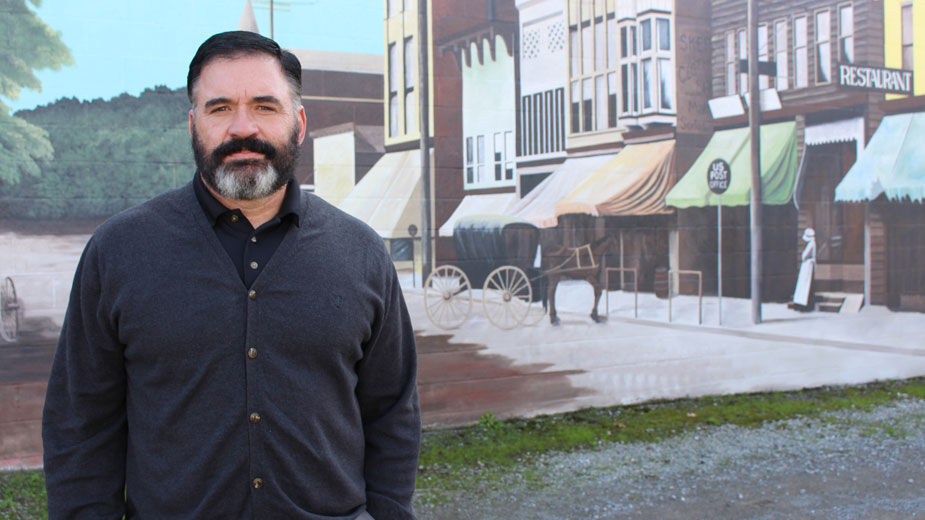 Over the summer, the village redid its tennis courts in the park, which were at the point of being unusable, Monteleone says. The project cost a total of $113,000 with $50,000 awarded from an ODNR grant, $42,000 from the Nash Memorial Foundation, $12,000 from the village and $9,000 from the East Palestine School District. (Hear more from Peter Monteleone in his 3 Minutes With interview here.)

“Growing up here when I was young, a lot of people would refer to that park as the gem of East Palestine,” Monteleone says. “We’re very proud of it and we want to do everything we can to maintain it and enhance it.”

Another organization that is working to enhance the village for residents and businesses is the East Palestine Community Foundation, initially formed in 2013 to raise money to install a splash pad at the park.

“We felt that would be beneficial and make the town more attractive to people to want to live here, settle here and have a business here,” says Marty Grim, president of the foundation, which raised over $40,000 for the splash pad, chairs and benches at the pool and completed the project in 2015.

The foundation receives all its funds from an annual golf scramble, princess party and a trivia night. The trivia night this year will be held Nov. 17 in the East Palestine Elementary School cafeteria.

The foundation is accepting grant applications from any nonprofits in the village seeking funds for projects that will benefit the community.

One of the new businesses that will begin operations in East Palestine is Ceram Fab at 900 E. Target St. in the old TubeTech Inc. building.

“The opportunity presented itself where we found a good-sized warehouse that can warehouse all of our materials,” says Philip Kent, president of Ceram Fab.

The company, which also operates a site in New Jersey, produces ceramic fiber modules and refractory storage products for the steel mill and foundry industry.

In March, Kent purchased the 120,000-square-foot building because it was one of the biggest industrial buildings in the village, he says. He plans on investing $1 million to fix the roof and renovate the building.

Operations are expected to start in January and Kent says he is looking to hire 10. Most of the steel mills the facility will service are in New Castle, Pa.

Another business expected to start construction soon in East Palestine is Pure OH LLC, which has been granted a provisional Level II cultivator license to grow marijuana at a site at the intersection of Bacon Avenue and Kemple Drive, according to the company’s license application.

Village manager Monteleone expects the company to create as many as 40 jobs.

Over the last couple of years, Don Elzer who owns six properties in East Palestine through his business, EP Management, has opened three businesses in the village along with his wife, Dianna.

Because of the potential he sees in the village, Elzer opened hot dog shop Dogs on the Run, the Studio 25 Arts Center for yoga and Sutherin Greenhouse.

“Everything you could want is here,” he says. “With the new cracker plant going up in [Monaca, Pa.] and a lot of the new developments going on, I think it’s the future.”

Most of the properties he owns are historic buildings. If they’re not occupied, it’s because he is renovating them, he says.

“You can’t redo history,” he says. “Some of the old buildings have so much character, you’d hate to lose that. Developments around the country are trying to duplicate these styles.”

The oldest building he owns was built in 1887 at 12 E. Main St. and was a hotel when it first opened. It currently houses a photography studio and a retail business. Elzer is in the process of making repairs to the rest of the building, which he would like to see house other businesses.

In February, Marc Blackwell Retail Outlet opened inside the building. Marc Blackwell is a designer in New York and Seattle and produces all his dinnerware items at East Palestine China Decorating at 870 W. Main St.

“He’s been getting stuff produced in East Palestine for years, so the decision came to put a business here to sell dinnerware items to the local people,” says Adam Bell, operations manager of the store.

Bell says he would like to see more high-end businesses move to the village, such as a coffee shop or restaurant you could find in Columbiana.

“Right now I think we need to compete with Columbiana and Lisbon,” he says. “We have the ability to do that in this town. We have the infrastructure. We have all the historic buildings.”

Melissa Smith, owner of 1820 Co. at 135 N. Market St., shares similar sentiments. 1820 Co. makes all natural, plant-based wax candles and sells them to retailers all over the country and at its retail space, which opened in 2009.

“There has to be some business models from other towns similar to ours that we could take some pointers from,” she says. “I would love to see some growth with the food and entertainment businesses.” 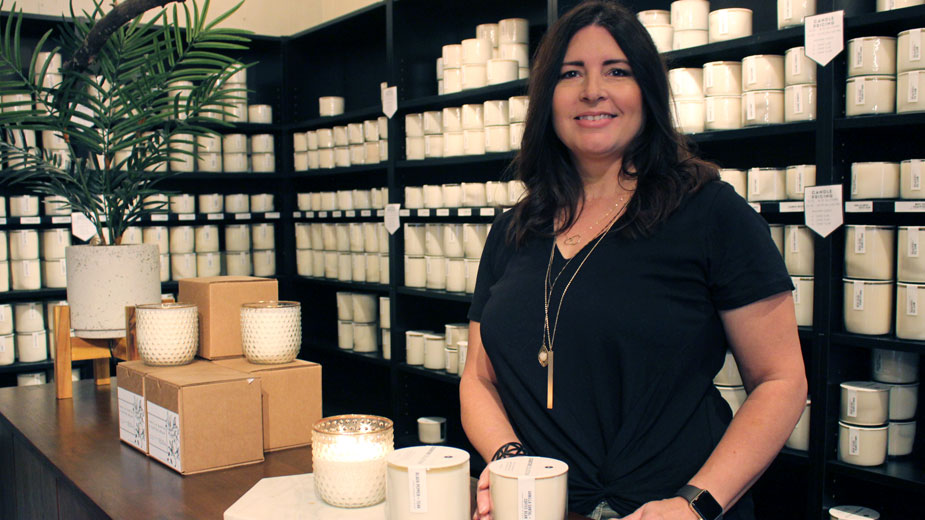 Melissa Smith, owner of 1820 Co., has been a resident of East Palestine her entire life and opened her shop downtown in 2009.

Smith, a lifelong resident of East Palestine, says she loves living in a small-knit community and is doing her best to be a part of the change the community is going through to help it grow.

“I’ve had a lot of hopes for the village to see some growth especially with the gas and oil coming in and doing exploration,” she says. “We’re hoping to see some of that growth trickle down over here.”