ELLWOOD CITY, Pa. – With all of its complexities, diverse business subsidiaries and integrated operations – plus tens of millions of dollars in new investment throughout the corporation – Ellwood Group Inc. remains at heart a down home family business, much like it was in when the company was founded here more than 100 years ago.

In the years since, the company has expanded to 29 facilities across five states, Mexico and Canada and employs 2,000. But it has no intention of losing that tight-knit family approach, executives say.

“I’m the fifth generation to work in the company,” says Anna Barensfeld, vice president of strategic initiatives at Ellwood. “I realized we had something special in the family business and I wanted to get involved in it. I wanted to keep that going.”

Today, the operation consists of 10 divisions branded under the Ellwood umbrella. The 29 plants include manufacturing and distribution businesses that vertically integrate company operations. Among its products and services are mold casting, steelmaking, open-die and closed die forging, crankshaft forging and machining, research and development, and distribution.

“Growth has skyrocketed,” Barensfeld reports. “We’ve expanded, but have stayed true to our core competencies. And that’s using our know-how in metallurgy to provide engineering solutions to customers.”

Most significantly, in the last four years, the company has invested or made plans to invest at least $200 million into new operations.

“We’ve made some major investments over the last five years,” Barensfeld says.

In 2014, Ellwood Crankshaft Group broke ground on an $80 million project to renovate and re-equip the former Westinghouse plant in Sharon, Pa. Earlier this year, construction started on Ellwood Quality Steel’s $60 million new remelting plant in New Castle, Pa., while in September, Ellwood Engineered Castings in Hubbard announced that it plans to construct a $60 million aluminum castings plant at that site and open a new division, Ellwood Aluminum. 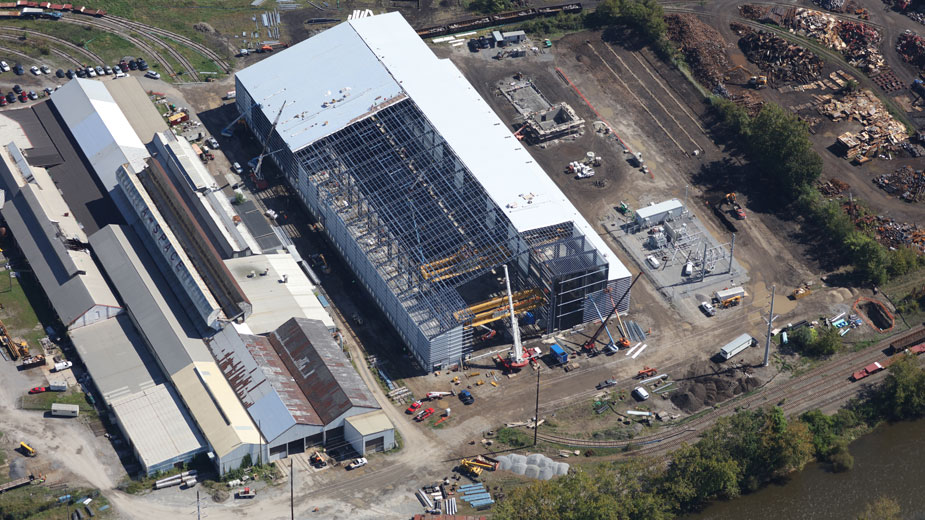 The new Westinghouse plant operation, Barensfeld says, has the capability of forging large crankshafts used in marine applications such as large cargo ships. What makes the crankshaft project so unusual is that the company can produce the part in a single operation using a massive forging press unlike any other in the global market.

“It is the largest, multidirectional crankshaft forging press in the world,” Barensfeld says. “That’s something we’re really proud of.”

The other expansions are equally impressive.

The $60 million, 110,000-square-foot expansion at Ellwood Quality Steels will house a remelt operation for high alloy steels that serve the aerospace and defense markets. The new building will accommodate two methods of purifying steel – electroslag remelting and vacuum arc remelting – operations that previously were done by outside parties.

“It takes a clean steel and purifies it drop by drop,” Barensfeld says.

Much of the same strategy drives Ellwood’s entry into the aluminum business, she continues, which is why the company is expanding in Hubbard. The Ellwood Group uses aluminum produced from other sources and supplies customers in the automotive industry with the product.

“Now, we’ll be able to supply them with our own aluminum,” she says. “We’re really excited about it.”

When the company was established in 1910, the core business was Ellwood City Forge, which still operates in Ellwood City. “My great-great-grandfather started the company, along with his brother,” Barensfeld says.

But it was her father, David Barensfeld, who took the business to new heights as CEO in 1985, when a risky decision was made to invest in steelmaking operations in New Castle. As other steel producers across the Mahoning and Shenango valleys were shutting their doors, Ellwood Quality Steels opened for business.

Since then, the New Castle works has become a major asset for the company, encompassing steelmaking, forging and machining operations at the site, says Bill Edwards, chief technical officer at Ellwood. It has also allowed the company to expand its reach and remain competitive in a host of markets, including oil and gas, aerospace, automotive, military and other industrial applications.

“The remelt facility will employ the latest technology out there,” Edwards says, noting a heavy reliance on automation so it can compete with low-cost competition from overseas. “The equipment has continuously improved compared to decades ago,” he adds.

About 200 are employed at the New Castle plant. Scrap steel is delivered to Ellwood Quality Steels and then melted in the company’s electric arc furnace.

“We source our scrap depending on the end requirements from the customer,” Edwards says. “We’ll melt about 45 metric tons in about 50 minutes.”

Once the batch is melted, the molten metal is poured into a large ladle, where it undergoes further processing. “You can remove other elements and alloy it with other metals, whatever the customer demands,” he says.

On one October afternoon, steel workers were busy preparing a recently melted batch of new metal, or “heat,” for pouring.

A large overhead crane snares the massive ladle and carries it to a teeming car, where it’s placed into position just above a large “trumpet,” or long neck that funnels the metal into ingot molds at the bottom. The bottom of the ladle opens. And a stream of white-hot steel is released. 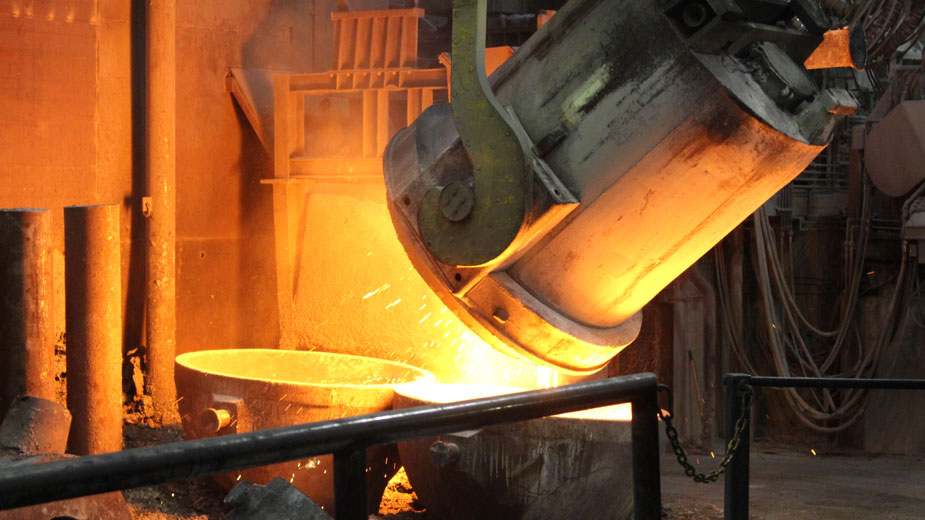 At Ellwood Quality Steels, a ladle pours excess molten steel into a mold, which will be remelted and reused in the steel making process.

“One pour will make three steel ingots,” says Jon Shank, manager of steelmaking. Often, these ingots will serve the company’s other operations, such as its forging divisions, where they will be further processed.

“I worked on this press for about nine months,” she relates. “I absolutely loved it.”

The mill products division then machines the forge into a smooth block of steel that could be used for different applications, such as tooling for the military or defense.

Among the major technical advantages is that Ellwood Mill Products has another 10,000-ton open-die press that can forge shafts for ocean-going and military ships – the largest of its kind in the western hemisphere, according to Barensfeld. “It’s important that the government has a domestic source for these products,” she says.

In just about every sense, the Ellwood Group represents a textbook case of how vertical integration supports the logistical complexities of manufacturing a component from start to finish.

Ellwood Engineered Castings in Hubbard, for example, creates the molds used to form ingots. These molds are delivered to Ellwood Quality Steels where steel is manufactured and poured into the mold, forming that ingot.

Ellwood Mill Products heats the ingots and then forges the red-hot steel rectangular shapes into various sizes. This division then machines the rough steel into a smooth, shiny tool-grade product that is then sent to customers through Ellwood Specialty Steel, the distribution division of the group.

“From the mold-making division, to steel, heat-treating, fabrication and cladding, all of the operations feed one another,” Barensfeld says. “They also sell on the open market as well. It keeps us lean.”

Most of Ellwood’s 29 plants are in western Pennsylvania, but the company has successfully spread its footprint where it makes sense, says Richard Davis, chief financial officer. “We have five plants in the Houston area, one in Dallas, one in Chicago, one in Detroit, one in Windsor, Ontario, and another in Queretaro, Mexico.”

Establishing a presence in Texas was critical for the company, Davis explains, because between 25% and 30% of Ellwood’s business is tied to the oil and gas industry.

Davis says onshore oil and gas exploration has rebounded in some areas since oil prices crashed during the latter half of 2014.

Although the company hasn’t quite matched business levels when oil was at its peak – 2014 was one of the company’s best years on record – sales have incrementally clawed back by 10% and 20% annually.

“Shale drilling is doing very well,” Davis says, especially in the Permian Basin in Texas. “That’s where the main activity is. And we’re beginning to see some more activity in the Dakotas,” in the Bakken play.

What hasn’t returned, however, is offshore oil exploration. “That’s been silent for three or four years,” he says.

Other markets appear strong at the moment, especially aerospace and defense. “There’s been a nice increase in automotive, although the future market there might be weakening,” Davis says. “Aerospace, on the other hand, is growing, and the defense business should be growing over the next three years.”

Still, the array of companies and services has presented a challenge to Ellwood Group because it’s created over the years an “alphabet soup” of acronyms, at times confusing new customers in the market, Barensfeld says.

As such, Ellwood Group has launched a new marketing campaign to help simplify the connection with clients and prospective employees. “We’re rebranding under the name ‘Ellwood,’ ” she says. “We’re a big business today, but we’re still 100% family-owned.”

About 30 family members hold all the shares in the company, she says.

Ellwood hopes to convey that it’s   a dynamic, privately held company that isn’t afraid to reinvest in its people and future – not only to attract new customers but also to attract younger workers into the steel and manufacturing disciplines.

Barensfeld says the company is especially proud of the careers that have been created as a result of Ellwood’s expansion over the years. “I take pride, and I know our employees take pride in creating products that literally make the world go round,” she says.

“It could be a steering knuckle for a truck, a part in a rocket that’s going to supply the International Space Station or a structural component for a Boeing 737. These things are essential.”

Pictured above: Anna Barensfeld, fifth generation in the business, points to forgings that will become landing gear for aircraft.