YOUNGSTOWN, Ohio – With the launch Friday of the EnVision Center at Rockford Village on the East Side, the Department of Housing and Urban Development is looking to change what public housing means to residents.

“For generations, the idea of government-run housing assistance meant one thing: helping to pay the rent,” said HUD Midwest Regional Administrator Joseph Galvan. “Housing assistance should be more than a roof over your head. EnVision centers will offer a more holistic approach by connecting families with the tools they need to become self-sufficient.”

The Youngstown Metropolitan Housing Authority and United Returning Citizens were selected to lead the EnVision program here, bringing together government agencies, private companies and nonprofit organizations to address what Galvan called the four pillars of the program: economic empowerment, educational advancement, health and wellness, and character and leadership.

How exactly those areas are addressed “is going to be designed by the community. So many times, the federal government comes in and they want to tell you what to do and how to go about doing it. That’s an old, ivory tower philosophy,” he said. “At the end of the day, residents know what’s best for the community.”

Friday morning, officials from HUD and the housing authority met with Rockford Village residents about what they’d like to see out of the program and what tools they’re looking for.

“One of the programs we talked about was how we’re going to educate residents and give them the skillsets to be that nurturing mother,” said Sandra Keller, who manages Rockford. “What I see as property manager is that it starts around age 10, where things can go bad. And one of the biggest issues is that there’s nothing for them to do as far as recreation … and giving these children purpose.”

Following the launch event, HUD representatives met with community stakeholders who will be involved in the EnVision Center, including the local Social Security Administration office, Youngstown City Police, Taft Promise Neighborhood and AmeriCorps. The stakeholder meeting was closed to the press.

It’s the collaboration between those groups, said housing authority Executive Director Jason Whitehead, that will lead to the program’s success.

“Each agency has limited resources, but we can collaborate not just financial resources but also human capital to get through red tape and bureaucracy,” he said. “HUD is linking with other federal agencies and county agencies so the execution is more precise, rather than launching something where no one has the resources to make it happen.

Galvan said HUD would provide no financial support to the Envision program – which launched June 7 in Detroit and now includes 17 cities nationwide, including Youngstown – but would oversee the implementation and provide help to locals.

“This is a program where we have grassroots that’s owned by the community and pools together resources,” he said. “We have poured billions of dollars into communities and the results have not been there. The purpose of this program is to bring the public, the private and the nonprofits together collaboratively to make life better for those living in these houses.” 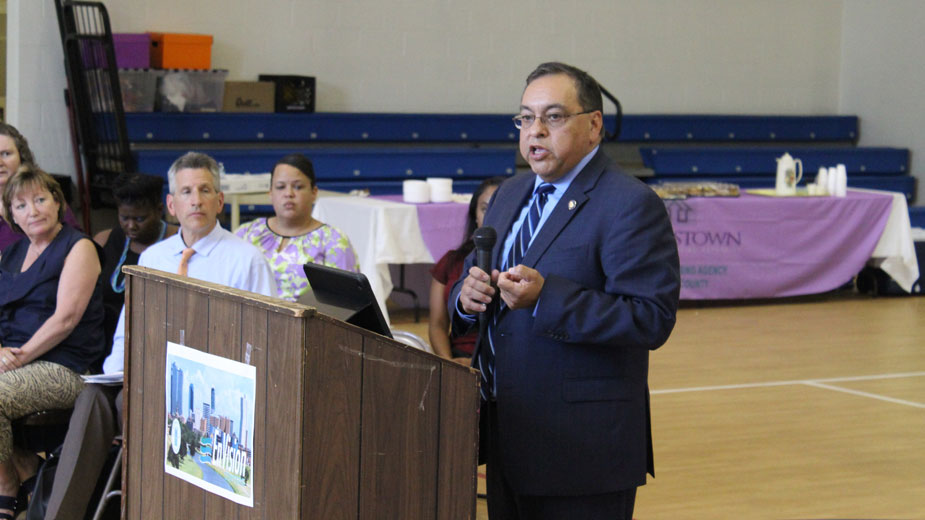 Part of the decision by HUD Secretary Ben Carson to not allocate funding, he added, was to ensure that it could survive a transition to a new administration.

“Administrations come and go and if they think one program is affiliated with another administration, they won’t fund it,” Galvan said.

To measure the success of the program, the regional manager said HUD would monitor things like the high school graduation rate or children living in public housing and the job placement rate of adults, as well as immeasurable metrics.

“The climate in which you raise a family is important too. When we see parents coming and two-parent households, that provides a role model,” he said. “When [kids] see their mother or father or brother or sister get a job and earn income, that becomes the norm. The norm is no longer living in public housing generation after generation.”

Added Dionne Dowdy, executive director of United Returning Citizens, “What we want to see is residents begin to trust again. If they trust HUD and trust us, then they’re open.

“They’re open to education, to be empowered, to be motivated,” she continued. “Sometimes, they don’t trust the bigger entities because they’ve been there and been let down. We can be the go-between so they don’t feel left out.”

With the launch of the EnVision Center Friday, Whitehead said the Youngstown Metropolitan Authority plans on having “a full-service menu of services” available to those living in public housing by the end of the year. Later in the summer, staff will visit the center in Detroit launched earlier this month to look at their practices.

“So once we do that, we’ll be able to work out the devils in the details,
he said.

HUD has set no timetable for the EnVision program, Galvan said, leaving it up to each community – from San Diego, California, to Inkster, Michigan – to instead set their own pace.

That opportunity, Mayor Jamael Tito Brown said, could lead to the implementation of similar programs citywide.

“You want to see if you can replicate this and give the opportunities and best practices to other programs. We look at this for best practices so we can make sure that it makes it to all four quadrants of the city of Youngstown,” he said. “I love seeing new homes go up. I love seeing new developments. But what I love more than anything is when people are coming up, when the quality of life of families is improving.”