By CHRISTOPHER RUGABER AP Economics Writer
WASHINGTON (AP) — Chair Jerome Powell acknowledged Tuesday that high inflation has emerged as a serious threat to the Federal Reserve’s goal of helping put more Americans back to work and that the Fed will raise rates more than it now plans if needed to stem surging prices.

“If we have to raise interest rates more over time, we will,” Powell said during a hearing of the Senate Banking Committee, which is considering his nomination for a second four-year term. Fed officials have forecast three increases in the their benchmark short-term rate this year, though some economists say they envision four rate hikes in 2022.

The stark challenge for Powell if he is confirmed as expected for a new term was underscored by the questions he faced from both Democratic and Republican senators. Powell and the central bank are under rising pressure to rein in inflation without ramping up interest rates so high that the economy tumbles into another recession.

On Tuesday, Powell took pains to rebuff suggestions from some Democratic senators that rate increases would slow hiring and potentially leave many people, particularly lower-income and Black Americans, without jobs. Fed rate increases typically lead to higher rates on many consumer and business loans and have the effect of slowing economic growth. But Powell made clear that he is now more worried about the damage that rising inflation could inflict on the job market.

“High inflation is a severe threat to the achievement of maximum employment,” he said.

The economy, the Fed chair added, must grow for an extended period to put as many Americans back to work as possible. Controlling inflation — without raising rates so high as to choke off the economic recovery — is critical to lowering unemployment, Powell said.

“We know that high inflation exacts a toll, particularly for those less able to meet the higher costs of essentials like food, housing, and transportation,” he told the committee.

Before the Fed chair spoke, he received expressions of bipartisan support from the chair of the committee, Democratic Sen. Sherrod Brown from Ohio, and Pennsylvania Sen. Pat Toomey, the senior Republican on the panel.

“The president is putting results over partisanship, re-nominating a Federal Reserve chair of the other political party,” Brown said. “As chair, together with President Biden, he has helped us deliver historic economic progress.”

Inflation has soared to the highest levels in four decades, and on Wednesday the government is expected to report that consumer prices jumped 7.1% over the past 12 months, up from November’s 6.8% year-over-year increase.

Powell’s nomination is likely to be approved by the committee sometime in the coming weeks and then confirmed by the full Senate with bipartisan support. But members of Congress are sure to interrogate Powell on whether the Fed can successfully rein in inflation without slowing the economy so much that it falls into a slump or even a recession.

Economists and former Fed officials are increasingly raising concerns that the Fed is behind the curve on inflation. Last Friday’s jobs report for December, which showed a sharp drop in the unemployment rate to a healthy 3.9%, and an unexpected wage increase, has helped fan those concerns. While lower unemployment and higher pay benefit workers, those trends can potentially fuel rising prices.

At the Fed’s most recent meeting in December, Powell said the central bank is rapidly accelerating its efforts to tighten credit with the goal of reining in inflation. The Fed will stop buying billions of dollars of bonds in March, ahead of its previously announced goal of doing so in June. Those bond purchases have been intended to encourage more borrowing and spending by lowering longer-term rates.

Fed officials now expect to raise short-term interest rates three times this year, a sharp shift from September, when they were divided over doing it even once. Economists increasingly expect them to raise rates at least four times in 2022.

Powell also said in his prepared remarks that the U.S. job market is “strong” and the economy is “expanding at its fastest pace in many years.” But he also conceded that the economy has suffered some longer-term damage from the pandemic.

“We can begin to see that the post-pandemic economy is likely to be different in some respects,” the Fed chair said. “The pursuit of our goals will need to take these differences into account.”

Powell has previously said that the Fed’s initial goal was to restore the economy and job market to pre-pandemic levels, when the unemployment rate had fallen to a 50-year low of 3.5% and the proportion of Americans either working or looking for work was higher than it is now.

But more recently, Powell has acknowledged that many of the people who stopped working or seeking jobs in the pandemic are unlikely to return anytime soon. Millions of older Americans retired earlier than they likely would have without COVID, and many people are foregoing jobs to avoid getting infected. 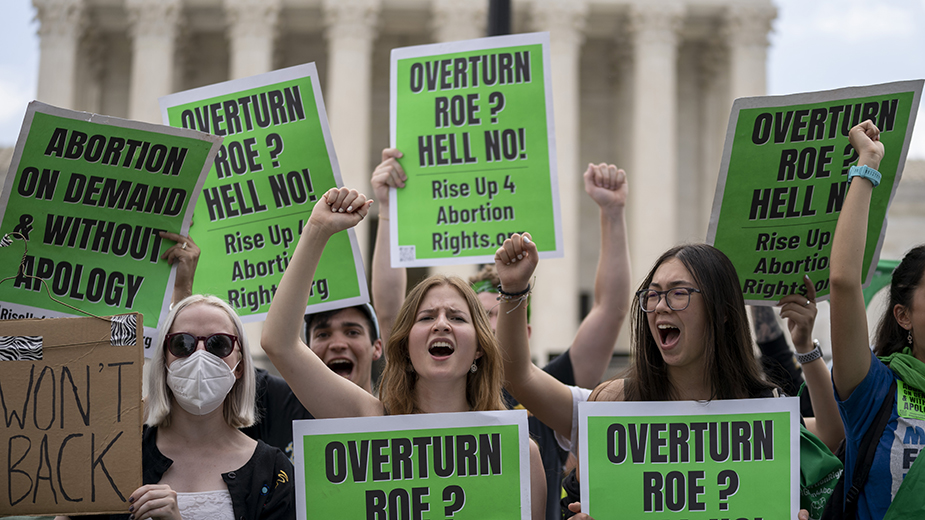 By JOHN HANNA, KIMBERLEE KRUESI and HOLLY RAMER Associated PressThe Supreme Court’s decision to end the constitutional right to abortion likely will lead to legal battles as already divided states grapple with the new landscape of abortion access. Even before…