BOARDMAN, Ohio – Near the end of his final campaign rally Monday night before voters head to the polls, U.S. Rep. Tim Ryan called the crowd’s attention to one of the signs he saw in the crowd.

The red, white and blue sign had a simple message: Shock the World.

It’s also what he expects Ohio voters to do by casting their ballots for him for U.S. Senate over his Republican rival, author and venture capitalist J.D. Vance. Polls have increasingly forecast the race as leaning Republican as the national political environment has soured on Democrats.

A pair of polls conducted last week found Ryan down by 10 percentage points.

“We are ordinary but ordinary people do extraordinary things,” he said. “In Ohio tomorrow, we are going to do something extraordinary.”

During a nearly 25-minute speech before roughly 300 supporters at the Operating Engineers Local 66 hall, Ryan and an array of speakers sought to make the case for electing him to the U.S. Senate.

He stressed that the election is “not just going to affect Ohio” but will affect the entire country, and he warned of the extremists seeking office in the election.

Democracy “doesn’t just happen. It is a choice,” he said. “We have a say in what our future looks like. And that’s why these elections are so important, especially when you’re taking on such an extreme group of people who are trying to hijack it and jam their ideology down the throats of everybody else in the country. We have to step up right now.”

Ryan shared memories of his maternal grandfather, a union steelworker whose wages enabled him to participate in the civic life of his community by volunteering for his church, Our Lady of Mount Carmel in Niles. His grandfather also would encourage people to vote for levies to support schools, safety forces and libraries because the “help build a strong community.” And he had a good job that allowed him to pay for those levies

After his grandfather died, he came across a book about his church that showed his grandfather standing in front of a half-built wall he was working on as a volunteer. He later learned that that wall was part of the grade school he attended.

“This guy was literally building my future, and my brother’s future, and the future for all those little boys and girls who went to that school,” Ryan said. “When you strip away all the craziness in politics, all the negativity, all the nastiness, all the division, strip that all away, and it comes down to this question: Are we building a future for our kids and our grandkids?”

The 10-term congressman was supported by an assortment of speakers that included local, state and national organized labor leaders, a one-time and potentially future colleague, members of his family and even a former GOP county chairman.

Said U.S. Sen. Sherrod Brown, D-Ohio, Ryan has “always been on our side fighting against” the outsourcing of jobs” and trade deals that are unfavorable to workers.

“Tim gets things done. You absolutely can count on him not to compromise on human rights, and that’s why that’s why he always stands with labor and is always on the right side of these issues,” he said.

Brown, who served alongside Ryan in the U.S. House of Representatives before his election to Senate in 2006, said Ryan’s election is “important to make sure that we push back” on the corporate interests that Brown blamed for inflation, pointing to high profits by oil, drug and international shipping companies, among others. –

“That’s why we have inflation,” he said.

Additionally, he touted Ryan’s support for legislation to fix pensions and expand the child tax credit.

“You can look at Tim’s whole career fighting for workers here” while Vance, during his career, made money off outsourcing workers’ jobs, Brown said

“This race is the race everyone is watching – no pressure,” she remarked.

Shuler has returned to Ohio on multiple occasions as she has visited battleground states in the leadup to the midterm elections. Everywhere she goes, she hears about people called essential workers during the pandemic now being treated as expendable.

“The corporate CEOs are raking in record profits yet can’t find a few bucks to put on the table during collective bargaining [or] can’t find it in their profits to make sure that their health care is paid for or that their retirement is secure,” she said. “That’s why this election is so important, Because we know there’s a difference between who’s going to stand up for working people and who’s going to stand up for the CEOs.”

Ohio AFL-CIO president Tim Burga said Ryan is “tough enough to go toe to toe with the corporations” and “smart enough to smack down the geniuses in both parties who gave us the trade deals that gutted the middle class.” He is “strong
enough and has the guts to stand up to anybody no matter who they are, if they are not standing up for the American worker.”.

No campaign consultant had to educate Ryan “on the life of a steel worker, an auto worker, a communications worker or grocery clerk and the challenges they face,” Burga continued.

On the House floor, Ryan has delivered “floor speech after floor speech talking about unions and workers’ rights,” helped to save pensions for people across the country, brought money to Ohio through the infrastructure bill and supported the Chips Act, said Melissa Cropper, president of the Ohio Federation of Teachers and secretary-treasurer of the Ohio AFL-CIO.

Cooper expressed concern over how extremists have “poisoned the minds” of children, making it OK to call each other names, divide people and “make our children not believe anymore in facts” or institutions such as public education and unions.

“Tim Ryan is going to give our children something to fight for and something to hope for moving into the future,” she said.

Chris Gibbs, a livestock farmer and former Shelby County Republican Party chairman, said he left the party and became an independent in 2019 after deciding that the GOP no longer represented the tenets he believes are “most important foundation for a party”: diplomacy, statesmanship, compassion and personal responsibility. He spent three years “in the wilderness” looking for a leader who represented those tenets.

During a roundtable held at Gibbs’ farm, Ryan asked the nearly 30 farmers participating in attendance to tell him what he needed to know and listened to them for the next 75 minutes.

“I knew right then that I had found the candidate that I wanted to be behind,” Gibbs said, and he registered as a Democrat.

People like Vance, he added, are “all hat and no cattle.”

Ryan continued to express optimism in remarks to reporters following the rally.

“Democrats, Republicans and Independents are exhausted with the age of stupidity and they want to move into an age of possibility,” Ryan said.

Despite the polls, he expressed confidence that he would defeat Vance, pointing to a four-point advantage for Democrats in early voting. He said he has spoken to several voters who, while they are voting for Gov. Mike DeWine, a Republican, for reelection, don’t like Vance.

“We’re going to shock the world,” he said. 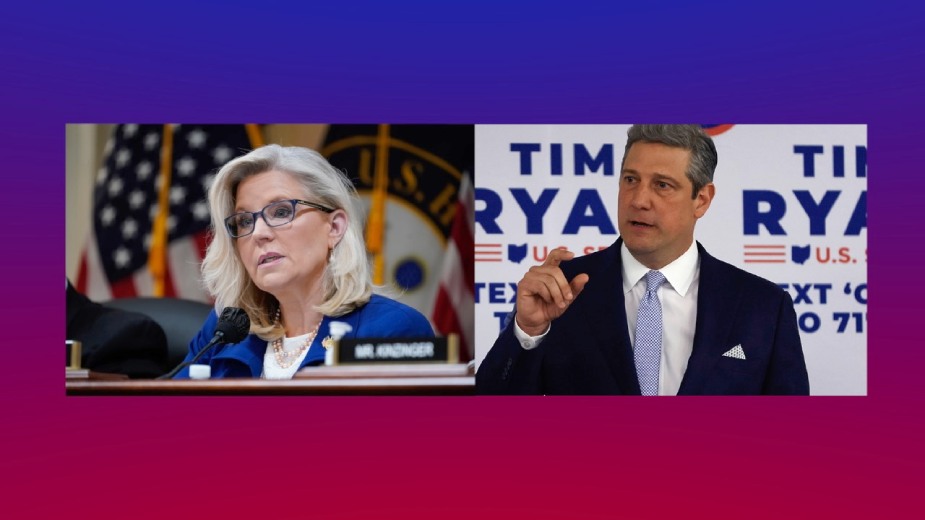