FirstEnergy, DeWine’s Office and Others Still Far from Full Disclosure on HB 6

Roadblocks at the Public Utilities Commission of Ohio, in Gov. Mike DeWine’s office and elsewhere could make it harder to prevent future corruption.

The Public Utilities Commission of Ohio “must first broadly investigate FirstEnergy in order to learn the facts for remedying any consumer harm,” said Merrilee Embs, spokesperson for Ohio Consumers’ Counsel Bruce Weston. “Ohioans are owed the facts by their state government. Unfortunately, in PUCO cases some facts can be hard to come by from FirstEnergy.”

In broad terms, federal and state court cases allege that FirstEnergy, its affiliates, and others paid roughly $60 million to dark money groups to elect supporters of Householder, secure the passage of HB 6, and block a voter referendum to stop it. FirstEnergy has also admitted to paying millions of dollars to a company linked to Sam Randazzo, including $4.3 million shortly before he became chair of the Public Utilities Commission of Ohio.

HB 6’s nuclear subsidies and recession-proofing provisions have been repealed. However, other parts of the law still require Ohioans to pay roughly $233,000 per day for two 1950s-era coal plants, known as the OVEC plants. The law also gutted Ohio’s clean energy standards.

Although FirstEnergy made some admissions this summer, the company is “still trying to sit on more details and information that seem really important for a lot of people to understand what potential penalties the company could still be facing going forward,” said Dave Anderson, policy and communications manager for the Energy and Policy Institute.

“What we’ve seen to date suggests there’s a lot not to trust,” Anderson said.

New! Subscribe to our Eye on Utilities Newsletter to get monthly updates on the myriad shareholder actions, criminal cases, and regulatory investigations surrounding the HB6 scandal.

At the Public Utilities Commission, for example, FirstEnergy wants to block a mid-case appeal by the Office of the Ohio Consumers’ Counsel on document production issues. Among other things, the Consumers’ Counsel wants copies of all documents from the investigation that led FirstEnergy to fire former CEO Chuck Jones and others. Those materials presumably include information about Randazzo. The requested documents could also reveal more about payments to Generation Now and other dark money groups that allegedly furthered Householder’s and FirstEnergy’s interests.

The Consumers’ Counsel also wants documents FirstEnergy may have produced in civil court cases, such as shareholder lawsuits against the company. Some of those cases are on hold during the criminal case against Householder and others. In cases that are moving ahead, FirstEnergy has sought court orders to restrict who sees documents produced to various parties. In at least one case, opponents can’t even share the materials with lawyers in other cases against the company. So, the Consumers’ Counsel needs an order from the PUCO to get the documents.

FirstEnergy spokesperson Jennifer Young declined to comment on pending cases. “We have taken swift action to address events that have occurred over the past year and to ensure a culture of strong ethics, integrity and accountability at the company,” she said.

“What happened with FirstEnergy was systemic,” said Ashley Brown, a former PUCO commissioner who now heads the Harvard Electricity Policy Group at the Harvard Kennedy School. In his view, the PUCO should want to get its hands on all relevant materials, including whatever report justified FirstEnergy’s ouster of Jones and others.

The commission has previously said it intends to base its decisions on what the evidence shows, Brown added. But based on the rulings so far, he said it’s as if “the Commission is waiting for the evidence to voluntarily walk in the door.”

Daymark, the company preparing that audit report, didn’t get records for a former compliance officer from 2016 through 2020. That’s the most relevant time frame for HB 6. And FirstEnergy’s compliance officer was let go in the wake of HB 6. The auditors also said they couldn’t get backup documents from others at FirstEnergy.

“The fact that they lost that compliance officer doesn’t mean they don’t have the documents,” Brown said.

Without the documents, Daymark’s report found no major violations on the part of FirstEnergy and its utilities. Yet it noted eight “minor violations” and 13 “opportunities for improvement,” which might have enabled or contributed to improper charges to consumers and money transfers for the alleged scheme.

Meanwhile, newly available emails raise questions about how independent the Public Utilities Commission’s independent audits really are. Last year the PUCO arranged for American Electric Power to get an advance copy of an audit on the pre-2020 costs for the OVEC coal plants “for redacting.” The PUCO staff also sought changes to the report’s conclusion, tone and level of detail about the HB 6 scandal. The Consumers’ Counsel included the documents with its testimony supporting a bill to repeal the HB 6 coal plant subsidies.

“As the state consumer advocate, we are dismayed with the utility-friendly emails between the PUCO, the PUCO’s auditor and AEP that cater to the utility AEP in the audit of the coal power plant bailout that Ohioans were made to pay,” Embs said.

It’s not yet known how FirstEnergy or the PUCO staff might have shaped the corporate separation report or another HB 6-related audit that came out in August. It is known that FirstEnergy made extensive comments on a draft audit report in at least one other case.

Members of the public are also having trouble getting materials from the Public Utilities Commission under Ohio’s Public Records Act. On Jan. 4, for example, Anderson asked the PUCO for all emails from Randazzo relating to HB 6 during his tenure at the commission. PUCO’s deputy legal director, Donald Leming, advised that materials were being reviewed and should be ready by early July.

Nine months after his initial request, Anderson still hasn’t gotten any documents from the PUCO.

On Oct. 1, after multiple follow-up emails from Anderson, Matt Schilling, PUCO’s public affairs director, noted that Anderson’s records request “has significant overlap with the PUCO’s search and production of records related to the subpoena from the U.S. Attorney’s Office we received on April 13, 2021, which is ongoing and that we anticipate will take some time.”

“The failure to produce records related to a major bribery investigation in a timely manner indicates that transparency, accountability, and ratepayer protection remain low on PUCO’s priority list,” Anderson said.

“When faced with difficult decisions about access to information, the public is always best served when there’s a thumb on the scale in favor of disclosure,” said Andrew Alexander, a visiting professional with Ohio University’s Scripps College of Communication. “Maximum, timely transparency arms citizens with quality information that enhances understanding and leads to better decision-making. It also helps members of the public — not just members of the press — serve as watchdogs against official misconduct or incompetence.”

Even some Ohio lawmakers have been “met with nothing but roadblocks” in their efforts to get documents related to the House Bill 6 scandal.

Speaking on Sept. 28, Rep. Jeffrey Crossman, D-Parma, detailed problems he and Casey Weinstein, D-Hudson, faced in getting records from the governor’s office about communications between Gov. Mike DeWine’s former chief of staff Laurel Dawson and Randazzo about his PUCO candidacy and the $4.3 million payment he got from FirstEnergy.

“The public deserves answers about what happened here, because it’s going to continue to cost us money,” Crossman said, noting that the assertion that there were no records at all of any of the communications just wasn’t credible.

New! Subscribe to our Eye on Utilities Newsletter to get monthly updates on the myriad shareholder actions, criminal cases, and regulatory investigations surrounding the HB6 scandal.

Pictured at top: The Davis-Besse Nuclear Power Station is one of the plants to receive subsidies via Ohio House Bill 6. (Image via Nuclear Regulatory Commission/public domain.) 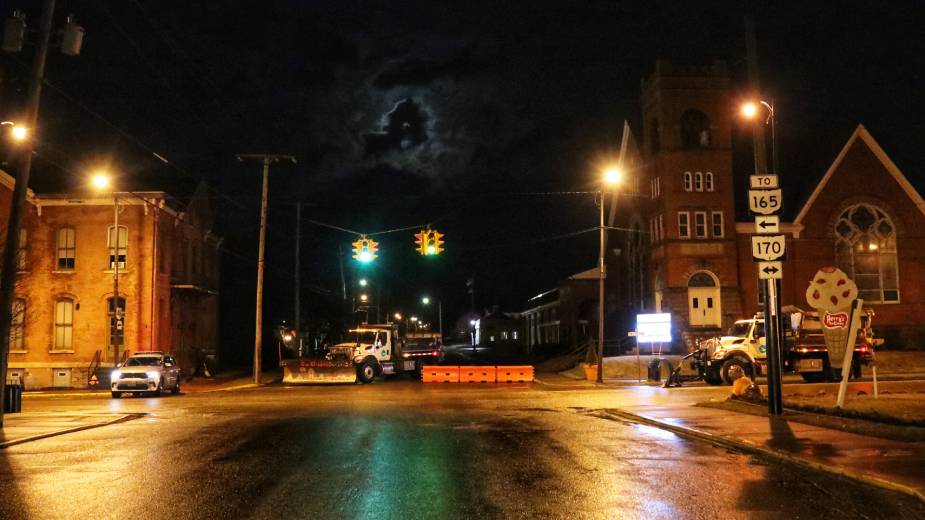 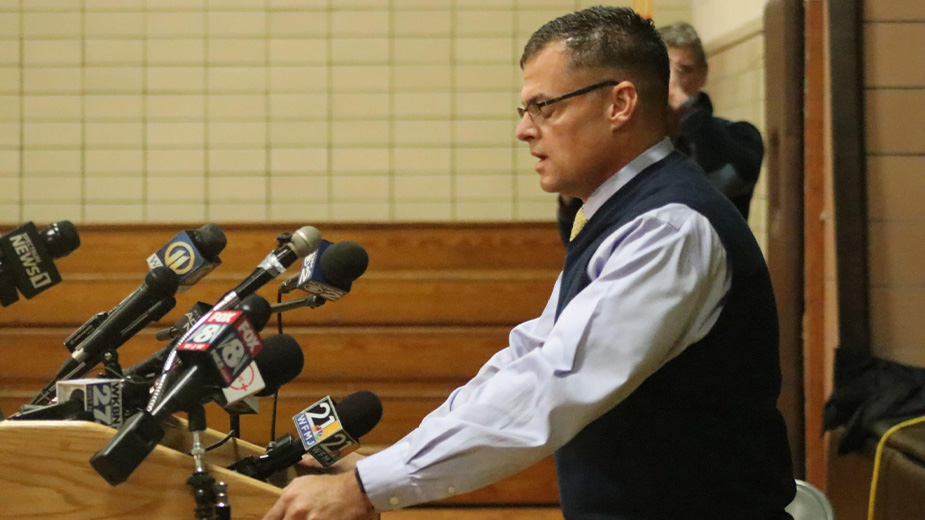